As was the case two seasons ago, David Price was one of the favorites to take home baseball's highest honor. That time, sabermetrics made its voice heard giving the award to Felix Hernandez despite the outcry of his 13-12 record. This time, Price overcame Verlander's superior Wins Above Replacement grades to become the first ever Cy Young winner in franchise history eeking out Justin Verlander by just four points.

The voters in the Baseball Writers Association of America deemed David Price, Justin Verlander, and Jered Weaver as the three finalists for the American League Cy Young Award. Each had a narrative to claim in the process. Price led the league in ERA and tied with Weaver for the highest win total at 20 wins as well as win-loss percentage, Verlander had the highest Wins Above Replacement score at Baseball Prospectus, Baseball-Reference, and Fangraphs, threw more innings, completed more games, and struck out more hitters than any other pitcher, while Weaver also led the league in fewest hits allowed and fewest baserunners allowed per nine innings.

With the first place finish, Price becomes the first pitcher in franchise history to win the award and it gives him a first and second place finish in the Cy Young voting in just three full seasons of pitching in the major leagues. Price was able to overcome Verlander's superior WAR grades with a combination of traditional narratives, extensive research, or perhaps a blend of both. A tale of the tape approach of the three finalists show just how similar Price and Verlander were in 2012. 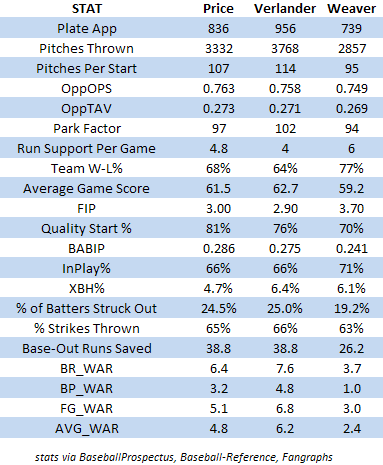 Price may have had a shot at the triple crown of pitching stats if Verlander was not super-human in terms of the workload he took on. Verlander faced 120 more batters than Price did in 2012 - the equivalent of nearly five extra games pitched. Verlander led the league in strikeouts, yet the two pitchers were just half a percentage point apart in terms of the percentage of hitters retired by strikeout.

Price faced the toughest quality of opponents as the hitters he faced had an aggregate OPS as well as a True Average Value (via BP) a few points higher than what Verlander faced in 2012. Price enjoyed the home field advantage of pitching in Tropicana Field that Verlander did not enjoy pitching in Comerica Park that slightly favors hitters. Price used the advantage to allow fewer extra base hits than Verlander did, but Verlander won the battle of batting average of balls put into play despite playing with a less than stellar infield defense.

Price also led the American League in quality start percentage at 81 percent, marking just the 37th time in the past 22 seasons a pitcher has had at least 80 percent of his starts graded as quality starts and the second time Price has done so in his career joining Felix Hernandez as the only other active pitcher with multiple seasons having 80 percent or more of their starts as quality starts.

In 2010, Price was not able to overcome the battle against WAR as Felix Hernandez took home the hardware. This time around, WAR lost out to the tried and true narratives of awarding 20-game winners and ERA champions as Price became the 18th of 19 pitchers to win the award while leading the league in both wins and ERA. This should not be construed as a slight to either argument since there is no formal criterion for the award, but it is rather interesting to see the traditional statistics surge back into the lead after falling behind the advanced statistics in 2010 despite the influx of newer voters into the selection process and the continued proliferation of sabermetrics into the national discussion.

Just about any way you mix the numbers, David Price and Justin Verlander were rather close in their 2012 performances and that is reflected in the final voting for the award. Price's selection marks stops a four-year streak of the highest WAR according to Baseball-Reference predicting the eventual winner.

In honor of Price's success, we re-live one of the greatest images in DRaysBay history 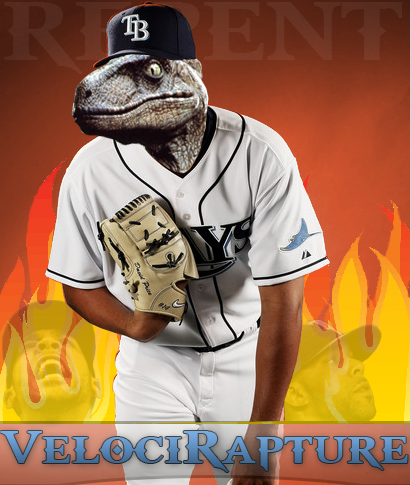