2012 Season Review: Rays Game Of The Month Of September/October

Rays Playoff bid falls short but their were a number of fantastic finishes and a dominant pitching performance to end the 2012 season.

Share All sharing options for: 2012 Season Review: Rays Game Of The Month Of September/October

The Rays finished September/October with a record of 19-11. After going 17-10 in September they pulled to within 3 games of the wild card as the Orioles came to Tropicana Field for a 3 game series but their playoff push was no longer in their control. When the Oakland A's beat the Texas Rangers on October 1st the Rays season came to an end and after taking 2 out of 3 from the Orioles the Rays finished the year with an overall record of 90-72. The end of the 2012 season was just as exciting as it was in 2011 but the Athletics and Orioles would not collapse nor would they pause to allow the Rays to pass them.

The Rays won 10 of their last 11 games in September to trim the lead from 6 games back in the wild card to 3 games back. During that stretch they outscored their opponent 75-28 and out-homered them 23-3 and hit a homer in all 11 of those games to go with a pitching staff that pitched to a 2.48 ERA (98IP, 27ER).

September was quite a month of great games and fantastic finishes. Every night was spent scoreboard watching and nail biting. The best games of the month of September/October are presented below. If you haven't had an opportunity to view the game of the month of April, May, June, July, or August the links are included below:.

Rays Game of the Month: April

Rays Game of the Month: August

James Shields allowed only 3 runs over 8 innings and Chris Gimenez delivered an RBI single in the second and singled in Ryan Roberts with the eventual game winner in the bottom of the 8th. Prior to rallying for the go ahead run Joe Maddon was ejected for arguing a caught stealing of Rich Thompson for the first out of the inning. Fernando Rodney came in to close the door and earn his 41st save. 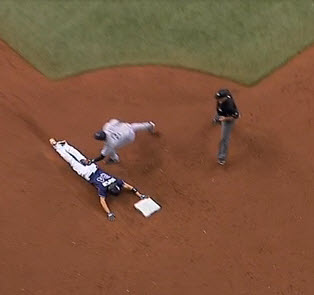 Micheal Young answered Evan Longoria's solo homer in the 4th with a solo homer of his own off Rays starter Jeremy Hellickson in the top of the fifth to tie the game 1-1. The game remained tied at 1-1 into the bottom of the 11th inning when Ben Zobrist connected off of Ranger reliever Mark Lowe for a 2-run homer to give the Rays a 3-1 victory.

The Rays entered the bottom of the 9th with their hopes of a playoff bid in peril trailing the Red Sox 7-4 but in lightning fast fashion the Rays came charging back. Andrew Bailey was in to close the game and gave up back to back singles to Matt Joyce and Jeff Keppinger who both advanced on a Luke Scott groundout to first. Carlos Pena singled in Joyce and was replaced by pinch runner Rich Thompson. After Thompson stole second and Bailey fell behind to Stephen Vogt 3-0 the Red Sox elected to issue Vogt the free pass. Desmond Jennings singled to score Keppinger and Thompson to tie the game at 4-4.

Andrew Bailey's evening was finished and Vincent Padilla was brought into the game to face B.J. Upton. Padilla threw 3 straight fastballs to Upton and fell behind 2-1. With the count in his favor Upton was sitting fastball and got another one and drove it over the 404 foot marker in center field. Only fitting that on Star Trek night the game ended on a blast to outer space.

With the game tied 2-2 Evan Longoria came up and delivered a solo homer to put the Rays up 3-2. Fernando Rodney came in to close the game and make a winner out of Joel Peralta and earn his 46th save.

The numbers tell the story. James Shields strikes out 15, walks none, only needs 106 pitches, and only faces 29 hitters. His only mistake on the evening was changeup that Chris Davis hit for a home run.