How do the Rays find a diamond in the rough?

To put together world championship squads on a budget, the Rays need to find bargains in the offseason. Yes, Friedman and company put in a lot of hard work trying to optimize the team, but the truth about baseball is that there's still a ton of uncertainty in player projections. To actually make a great team takes a little bit of fortune. Sometimes that means pulling Carlos Pena off the scrap heap and watching him become one of the best sluggers in the game. Sometimes that means Ben Zobrist turning into Zorilla. Sometimes it just means a platoon acquisition like Jeff Keppinger stepping in and hitting .325 in everyday action.

The point is, unless you're the Yankees or the Red Sox, you can't count on acquiring top talent that everyone else also knows is top talent.

One of my favorite stats to look at is HR/FB. It's not a perfect representation of power, and it is more affected by park effects than can be comfortable at times, but without actual visual scouting, it's about as close to "observing" a skill through the numbers as we can get. A player with a good HR/FB rate who's not getting a ton of playing time might be a hidden source of offensive punch.

The HR/FB stat stabilizes at around 300 PAs, which is to say that at that point, about half of what we see we can conclude to be true skill. Per the FanGraphs glosssary, league average is about 12.5%, with 15% being a very good rate, and the best players posting a ratio of 20%. To come up with some offseason targets, I pulled from FanGraphs a list of all players with a HR/FB over 15%, and over 250 but under 500 PAs (I figure that players with over 500 PAs are a known, and properly valued commodity). This criteria generates 36 players (click to enlarge image): 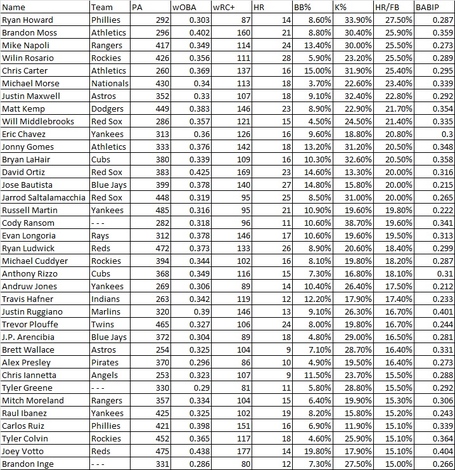 Now, of those players, I feel comfortable discarding Howard, Kemp, Middlebrooks, LaHair, Ortiz, Bautista, Rizzo, Iannetta, and Votto as players we will not be able to acquire, under any circumstances. We already have Longoria. I went ahead and threw out all of the players with a K% over 25% -- It's not that I think they're undesireable (I would love Napoli), but that's a major warning sign. That yields this list:

Now that's more like it. Rosario, Martin, and Ruiz are catchers, so they may not belong here (their playing time is limited by position, not lack of recognition), but I left them on anyway as potential C/DH/1B targets. Morse is one of our favorite players to dream on in these parts already. Same goes for Chavez (as a backup), and Cuddyer (as a starter). Before right now, I didn't know that Trevor Plouffe existed, but now that I do, I want to trade for him. An above average bat, with potential to be better, in a shortstop's body? If the Twins need pitching, he might be an option.

Does anyone else jump off the page?