First of all, B.J. Upton decided on his new contract yesterday, and beat the sports writers to the punch by changing his twitter avatar to reflect his decision: 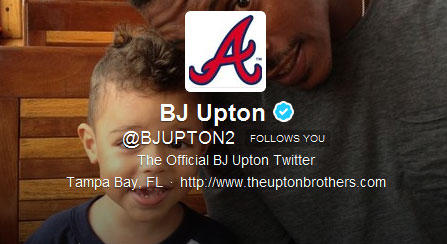 Upton's contract checks in at 5 years, $75.25 million (with no options), slightly above our site's predictions at the beginning of the off-season.

The contract is the largest free agent signing in Atlanta Braves history - leading Derek Lowe's 4 year, $60M deal from 2008. According to ESPN, B.J. Upton is only the third outfielder aged 28 or younger on opening day to sign a free agent contract worth at least $75M. (The others: Manny in 2000, Beltran in 2004) These stats are fun for perspective, but most telling of the cost for talent in the TV-deal era.

While centerfield will not look the same without Upton's lanky frame, I couldn't be happier to see him find a high paying gig - especially outside the American League.

It's safe to say that Bossman should be worth at least 3.0 WAR moving forward - having done so in all but one year since 2007 - and that the cost of 1.0 WAR is around $5M, so this seem's like a fair, market value deal for everyone involved. Even if his bat slips in the latter years, Upton's defense should carry the value of this contract.

For more on the Upton signing, Jeff Sullivan lends his opinion on Upton's value, calling the match with Atlanta predictable and reasonable, and ATL beat writer David O'Brien provides a comprehensive look at the Braves' free agent situation.

The Infamous Hall of Fame

Yes, it's that time of year when the arguments commence over the purpose of the Hall and who should be allowed to vote. The juiced era of the 90's has put a cloud over the ballot. This may not reach a boiling point for five years or so, but as things stand, if you were born in the 80's and you remember a star athlete's name they likely won't find their way into the Hall during the next 20 years. So what are we to do? Ignore the Steroid Era entirely?

Allow me to defer here to Peter Abraham - a ballot holder for the Hall - who has what Jonah Keri called, "an extraordinarily logical take on how to handle the PED era and Hall of Fame voting." Join me, and agree with Pete. Jeff Idleson - writing for the Hall's official blog - also gives an interesting perspective as to the purpose of the Hall of fame, detailing the lens it provides for viewing American History.

Side Note: Why is Tim Raines still not memorialized in Cooperstown?

Speaking of the Hall of Fame, one of the biggest oversights in Hall history might be the exclusion of Marvin Miller - founding leader of the MLBPA - who passed away on Tuesday. Many great writers have leant their thoughts on his legacy, but allow me to offer the memoirs by Grantland's David Hill and mlb.com's Keith Obermann for your consideration.

The Rays inked 2B/3B Mike Fontenot and re-signed OF Rich Thompson (2-for-22, 6-for-8 SB) to minor league deals yesterday - per Baseball America's Mike Eddy. While the speedy Thompson figures to see most of his time at AAA Durham, Fontenot could compete for the starting job at second base. MF batted .289/.343/.340 in 105 PA for the Phillies last year, his age 32 season. Expect more analysis soon.

In other news, Marc Topkin shared the final details on Evan Longoria's contract extension and the recent hires in the Rays scouting department.

Looking for Love in Adderall Places

Last on the agenda this morning is the new drug of choice in professional sports: Adderall. The prescription drug is an amphetamine, commonly used to tread ADHD in youth, and making headlines thanks to a rash of suspensions in the NFL and the recent 25-game ban of Carlos Ruiz.

The sudden rise in popularity prompted BP's Russell A. Carlton and the USA Today to each publish an excellent exposé on the drug. The only professional sports league to not currently allow Adderall for medical use is the NHL. Most other sports permit use of the drug, an allowance that players seem to be abusing.

- Dave Cameron offered his two cents on the Wil Myers trade rumors, not understanding the logic for the Royals.

- Deadspin: "Drawn by the scent of death and decay, coyotes prowl Wrigley Field."

- Finally, James Harden returned to Oklahoma City as the leading man of the Houston Rockets last night. In case you're wondering how that went...

Have a Rays-related question? Feel free to e-mail the masthead at: draysbaymailbag@gmail.com.