Dear Rays, please do not pass on Wil Myers

Wil Myers is apparently available, and the Rays are said to be involved. Passing up on a superb talent like him at a reasonable price would be a mistake.

Share All sharing options for: Dear Rays, please do not pass on Wil Myers

Over the past few days, crazy rumors have hinted that the Royals are discussing moving top prospect Wil Myers for starting pitching, with both James Shields and Jon Lester mentioned by name. This is crazy because:

a) The Royals are considering trading Wil Myers;

b) The Royals think Shields or Lester is worth trading Myers for.

First of all, let me offer a brief introduction about Wil Myers. Drafted out of high school in the third round of the 2009 MLB draft, Myers signed with the Royals for $2 million, which was far above slot. Myers destroyed his competition in a brief 2009 showing, hitting for a 1.106 OPS in 22 games. Since he was a catcher and a significant draft prospect, he earned the third spot on Baseball America's 2010 top 10 prospect list for the Royals. Baseball America noted his strengths, writing:

Capable of turning around a quality fastball with a flick of his wrists, Myers has excellent raw power. His swing isn't textbook and he'll sometime shift his weight to his front foot too early, but he manages to keep his hands back and hit line drives all over the park. He should hit for average as well as power. He has a plus arm and can rip off 1.85-second pop times even when his footwork isn't perfect. He threw out five of the 12 basestealers who tested him in his pro debut. He has average speed and is a better athlete than most catchers.

Promoted to AA in 2011, Myers struggled with injuries, shifted positions, and performed relatively poorly. His .745 OPS signified his injury and positional switch issues. The shift from catcher to the outfield was an attempt to quicken his assent to the majors and keep him healthy. Teams are not enthused about great hitters squatting down and ruining their knees, which is what also prompted the Nationals to move Harper off the catcher position.

Following the regular season, Myers played in the Arizona Fall League, where he tore the cover off the ball (even by AFL standards), hitting .360/.481/.674. He seemed poised for a breakout in the 2012 season. To the surprise of few, Myers, now healthy, dominated AA and AAA in 2012, hitting .314/.387/.600 overall. Most top prospect lists have yet to be released, but Myers is expected to land in the top 5.

Baseball America recently said, "He projects as an eventual No. 3 hitter in the lineup because of his batting eye and power potential."

Suffice to say, Myers has the makings of a superstar. He profiles as a corner outfielder with a fantastic bat. If Myers were to join the Rays, it would be hard not to be enthusiastic about him and Longoria hitting in the middle of the order for years to come.

For such a highly esteemed prospect to be available in a trade is a very rare occasion. For said player to be available for anything short of a superstar is even more rare. One could go so far as to say a comparable situation is unprecedented. The opportunity for the Rays to acquire a young bat with 6 years of control is something very hard to pass up, especially if the asking price is to be believed. Less than a year ago, I conducted some extensive research to determine the value of top prospects. By looking at previous top prospects and how much value they provided for their club and using them as a loose comparison, we can assign a baseline to judge a top prospect's value.

According to my research, here is how valuable top 5 overall prospects, such as Wil Myers, are. 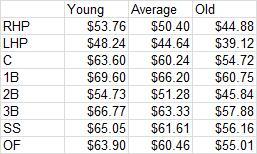 Simply put, elite prospects are very valuable for their clubs. Most of them turn out to be good players, some become superstars, and a very few become merely okay players. On the positional player side, players rarely fail if they are rated in the top 5 with guys like Chipper Jones, Alex Rodriguez, Andruw Jones, Vladimir Guerrero, and in more recent years Mike Trout, Bryce Harper, Jason Heyward, and Giancarlo Stanton dominating the lists. All prospects carry risk and we all have reservations about trading proven talent for potential, but a top 5 ranking practically ensures success.

According to the chart, Myers should produce approximately $63.9 million for his club, not including off the field value associated with star players.

Beyond the simple fact that the Royals are willing to listen to offers on Myers, the apparent asking price is also fascinatingly low. If what is being reported has any truth, the Royals are looking to move Myers for a package headlined by Shields or Lester (Or R.A. Dickey, according to more recent reports). A player like Myers, on his own, is arguably worth more than David Price (For the record, I am not suggesting that David Price would not yield Myers in a trade. I am speaking from a value perspective). Myers should net far more than a James Shields type of player.

For example, if we consider a win worth 5 million dollars and consider Shields about a 4.5 WAR pitcher, then he is worth around 45 million over the next two years. Subtract the 21 million dollars Shields is owed, and he has the surplus value of about $24 million. As stated above, Wil Myers should be worth over $60 million.

You can be emotionally attached to Shields, think WAR is an awful stat, or use the present value argument. However, the basic principle still stands: Wil Myers is worth far more than James Shields.

If the opportunity is available for the Rays to acquire Myers while surrendering only Shields, they should pounce on it. Heck, they could throw in a guy like Alex Colome and the trade will still be drastically unbalanced.

I do not know why the Royals are considering moving Wil Myers, or why the asking price is in the rumored range. They could be overly desperate for pitching. They could be low on their own player (though that is unlikely). They could have a mega crush on Jeff Franceor and consider him a long term option (incredibly unlikely). Most likely, it is just Dayton Moore being Dayton Moore. Regardless, it appears that the young, middle of the order bat the Rays need is available at a cheap price. If it is true, the Rays should not pass up on the Royals' offer.

For further reading: RJ Anderson already took a quick glimpse at potential concerns with Myers that would make the Royals willing to explore trading him. Nothing stood out. Myers is not coming off of an injury or a disappointing campaign, and has no known makeup concerns.