Should the Rays dip their toes in the water one more time and risk acquiring another aging slugger?

Andrew Friedman and the Rays will approach the winter meetings in search of bat(s) in a quest to generate offense. Friedman is quoted as saying:

"I would have no issues saying that we're trying to figure out what we're going to do at DH and first base, potentially [seeking] an outfielder," Friedman said. "There are different ways we can go because of versatility. We can look at different things." - mlb.com

There has been a lot of focus on the Rays acquiring a younger, controllable, power bat that by trading a starting pitcher and that may very well happen at some point during this offseason but would you be disappointed if the Rays dipped their toes into the water and acquired another aging veteran in Alfonso Soriano?

Since the winter of 2007 the Rays have taken their shot on the 30's something player in hopes that they would either rebound from injury or abide by the age old saying that a light bulb is always brightest before it goes out. Cliff Floyd was signed prior to the 2008 season, Pat Burrell prior to 2009, Manny Ramirez and Johnny Damon prior to the 2011 season, and Carlos Pena and Luke Scott prior to the 2012 season. Overall the Rays paid out a total of approximately $37.5M for this collection of players and in return the group combined to produce a total 2.1.fWAR for them. 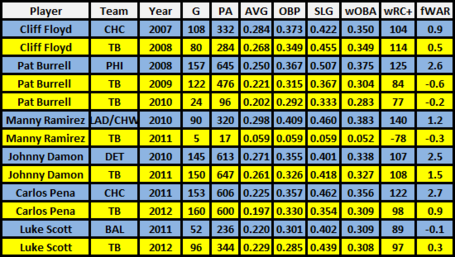 When discussing a trade for Alfonso Soriano it is important to make two assumptions.

Assumption One: Waiving The No-Trade Clause - The Cubs still have Soriano under contract for two more years at a staggering $18M per season and he has a full no-trade clause which would have be waived in order for any deal to be consummated. Although I'm certain that he would much rather stay in a large market, he is also going to be 37 years old come opening day and the taste of post-season baseball has eluded him since 2008. The Rays have a dominant pitching staff and are poised to make another playoff run after barely missing out on their 4th playoff appearance in the last 5 years last season. The Rays also play in the AL East which means Soriano would have an opportunity to showcase his talent on some of the largest stages in baseball. For these reasons I believe that he would waive his no trade clause and join the Rays.

Assumption Number Two: The Return - The Cubs will not be acquiring one of the Rays top tier prospects in exchange for Soriano. The return may be a high ceiling pitcher from the lower levels of the minor leagues packaged with another player but the deal would focus mostly on how much salary the Rays would assume. For trade purposes we'll use the number $10M.

Soriano is coming off a season in which he posted a slash line of .262/.322/.499, a wOBA of .353, a wRC+ of 116, a fWAR of 4 and hit 32 homers. Anytime we evaluate a Chicago Cubs player we have to look at the home/road splits to discern how much of his success can be attributed to the favorable conditions at Wrigley Field. As the numbers below demonstrate he posted nearly identical numbers on the road as he did at home.

The next question is whether or not Soriano is showing signs of decline - was 2012 his light bulb burning bright moment? He did strike out 24.9% of his plate appearances which is a career high (minimum season of 100 PAs) but he also maintained a walk rate of 7% which is greater than his career average of 6%.The result is a BB/K ratio of 0.29 which is his career average.

The numbers seem to suggest business as usual for the aging Soriano. There doesn't seem to be any glaring red flag other than his birthday and natural regression that comes along with each passing year. Overall, I do believe the Rays should pursue Alfonso Soriano and utilize him as their full time DH and part time LF.

Unfortunately for the Rays the health of Jeff Niemann is going to prevent them from getting value in exchange and in order to build that value up they will need to have him pitch. With David Price, James Shields, Jeremy Hellickson, Matt Moore, Chris Archer, and Alex Cobb already stretched out and ready to compete and Wade Davis chomping at the bit to rejoin the rotation it may be difficult to find room for him. Even if one of them is traded Niemann would still have to win a starting job in spring training. For this reason, the Rays should use Jeff Niemann as a lever to lower the cost of acquiring Alfonso Soriano from the Cubs.

The approach the Rays should take is an offer that centers around Jeff Niemann. In exchange the Cubs would agree to pay Niemann's salary which would reduce the total dollars that the Rays are paying Soriano to $7M for two years.

By acquiring Niemann the Cubs get another starting pitcher to add to their rotation along with Scott Baker, Jeff Samardzija, Scott Feldman, and Matt Garza. If Niemann avoids the disabled list and pitches effectively the Cubs could flip him at the trade deadline and acquire a prospect or two to expedite the rebuilding of their farm system or negotiate a long term extension prior to hitting free agency following the 2014 season.