Chart of the Day: RISP Production

We all know the Rays struggled to score runs, but how did they do compared to the league average?

Share All sharing options for: Chart of the Day: RISP Production 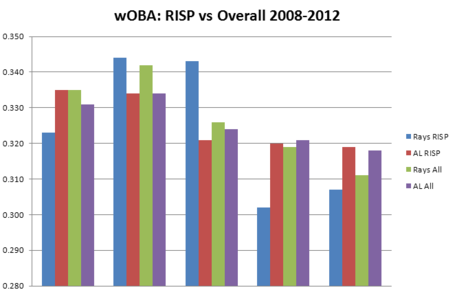 A couple of things stand out on that graph. Most noticeably, the American League as a whole is trending downwards as production with runners in scoring position has dropped each of the past five seasons with a bit of a leveling off over the last three. Secondly, after three seasons of outperforming the American League in one or both splits, the Rays have failed to do so in each of the past two seasons