A dive into the home run rates of primary catchers and the supporting cast behind them.

We already know that using catcher ERA as a meaningful stat is a fool's play simply because there is no correlation there. There are simply too many variables in play from the pitcher involved, the ballpark, the lineup, and even weather to make the statistic very predictive.

Yesterday, Sandy Kazmir shared some research in a daily thread about how Jeremy Hellickson pitched when Jose Molina was behind the plate compared to when the others were back there. It appears to be a sample of some of the larger work in a fan guide project he is spearheading, or, at least I hope it is as his initial posts on the topic look promising.

To that point, I thought it would be fun to look at the home run rates when a team's primary catcher is behind the plate compared to when the back-ups are in the lineup. 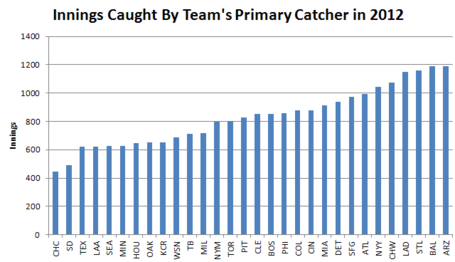 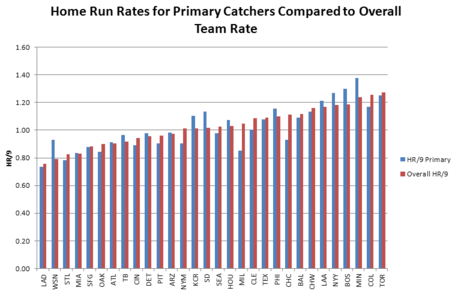 For the most part, the numbers lineup but a few teams had some noticeable differences. Wilson Ramos of the Nationals and Joe Mauer of the Twins had rates well above the overall team rate while Geovany Soto and Jonathan Lucroy had rates well below the team rate. Jose Molina came in just slightly above the team's home run rate; his rate was 0.96 while the overall team rate was 0.88.

The chart below compares the home run rates of the primary catchers for each club against other catchers on the team: 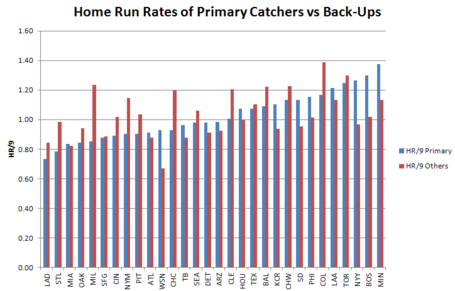 The final chart shows the net gain or loss in home run rate between the primary catchers and back-up catchers sorted in order of rate increase: 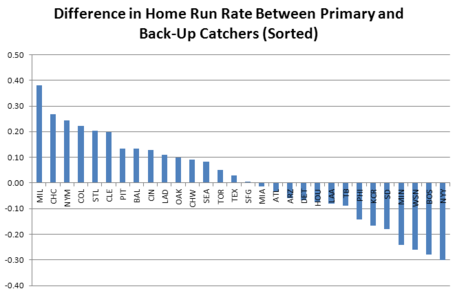 It would be worth the exercise to see if these differences come from the calling habits of the catchers (or managers) to see if some rely heavily on the fastball more than others. Kurt Suzuki would make an interesting case as his home run rate was lower than the other catchers in Oakland, but he was traded to the Nationals in mid-season. When Wilson Ramos was the primary catchers for the Nationals, the team allowed 71 home runs in 687.2 innings for a 0.93 rate. When Suzuki took over the primary catching duties for the team, that rate dropped to 0.67 when he caught games as 26 home runs were given up in 364.1 innings of work.