The Rays have had a busy 2013 off-season so far, but where do they go from here? What holes do they still have on their roster?

A couple weeks ago, I put together a post on projecting the Rays 2013 payroll. At the time, the Rays had roster holes at first base and shortstop, and they still had all the players they've recently traded: Burke Badenhop, Wade Davis, and James Shields.

Since that time, things have changed a bit -- to put it mildly -- so I figured it'd be worthwhile to take an updated look at the Rays projected 2013 roster: 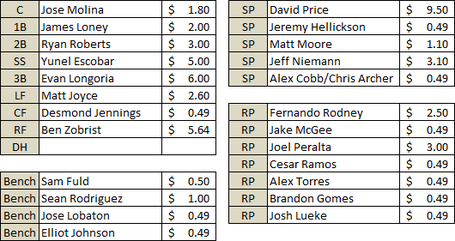 *Salaries taken from Cot's Contracts.
**For players eligible for arbitration, I plugged in the salaries projected by Matt Swartz at MLBTR.

First of all, I assumed that Wil Myers would not start the season in the majors. In fact, after reading around some more today, I feel it's most likely he remains in the minors until the Super Two date has passed in July. He's an absurd talent, yes, but he could use some more work on his strikeout rate, and if there's one thing we know about the Rays, it's that they do not rush prospects.

As such, I'm filling in the Rays roster under the assumption that Myers won't be with the team for at least half the season. Even then, though, the Rays have filled most of the holes on their roster by acquiring Yunel Escobar and James Loney. They allow the Rays to slide Ben Zobrist into a dual platoon at second base and the outfield, or simply play him and Matt Joyce full-time-ish in the outfield if they desire. Either way, the Rays can fill most of their positions internally and only need to make one more major signing (DH).

The current roster above has a total projected salary of $52 million. If we assume the Rays can have another payroll like they did last season, that leaves them with about $10-11 million in room to sign additional players. What else do the Rays need to do this off-season with that money? Here's my guess at their remaining To Do List:

Any thoughts on where the Rays may go from here?