The DRaysBay staff collectively reminisces about their favorite memories of James Shields.

To see more memories of James Shields, check out Part 1 of this week's roundtable.

Chris: The first Rays game I ever attended was on May 9th, 2008. I'd been following the team since 2006, but not being from the area, this weekend series against the Angels was the my first time in the Trop. Well, nothing much happened in this game except Shields pitched a fantastic one-hitter and came away with the W after Evan Longoria hit a two-run walk-off (his first career) in the ninth. Yeah. It wasn't even that flashy of a performance. It was just pure cruise control. The only downside was that Shields was 2 K's short to get "Free Pizza!" (Rather, a drive to a furniture store to get a coupon to drive to a Papa John's to get a "Free Pizza!")

Like most blue seats, I get my Rays fix through Dewayne Staats and Co., and I'm just fine with the TV experience. But, I'd like to think that attending this game--and the ensuing three-game sweep--truly instilled the Rays in my heart. Or to be a bit more cheesy: James Shields made me the Rays fan I am today.

Ian: Fans of any team share a common pool of experiences and a special set of sports knowledge. Thanks to James Shields (followed up by Fernando Rodney, Alex Cobb, Joel Peralta, Joe Nelson, Alex Torres and others), we Rays fans know about the changeup. We know that a changeup doesn't need to just be a change of pace, hiding in the fastball to keep hitters honest. A changeup can dance. It's possible to dominate at 84 mph.

Big Game James has been doing his thing for so long that it's tough to pick out a single moment, but there's one illustrative at bat that sticks out for me. I don't recall if it was last year, or the year previous, but the sequence is still clear. Juego G on the mound facing Jose Bautista in Toronto. Maybe there were runners on base, maybe not, but Bautista is a monster and every pitch thrown to him feels high leverage.

Pitch two is a changeup. It probably starts off looking like that fastball just above the knees that Bautista was sitting on. You can see Bautista's eyes narrow as he watches the ball in, lets it travel deep over the plate, and uncorks his incredible bat speed. Yes it's a changeup, but Bautista hasn't seen a fastball this at bat. He's watching the pitch and he's timed it up. Unfortunately for him, while a James Shields fastball can have nearly 15 inches of rise, a James Shields changeup can have two to three inches of drop. That's 17 inches of difference. The pitch is also in the dirt. 0-2

Pitch three is another low changeup, but this time Bautista is ready. He's an aggressive swinger, but not an idiot. He recognizes the pitch. He probably predicted it. He spits on it. Except it doesn't drop. You see, while a James Shields changeup can drop three inches, it doesn't always. Sometimes it rises. It may rise as much as eight or nine inches. In this case, it does, and it crosses the middle of the plate right at the knees. Strike three, and the best hitter in the league is retired.

Royals fans are about to learn what we Rays fans already know about changeups. Enjoy, KC. Thank you, James.

Jason: I don't really have a single moment. I just knew that I could count on Shields to get to 200 innings and not miss a start for six consecutive seasons. That kind of consistency is damn near impossible to find in this sport in this day and age. Justin Verlander may do it with more pizzazz, but Shields is every bit as impressive in his own way.

Did anyone else notice that Shields' K/9 has increased each of the past five seasons? What he did in 2011 after that awful 2010 was amazing to watch as he dominated his craft in front of the same fans that booed him loudly in 2010 and wondered why he was even included on the post-season roster.

If I have to pick one thing about him, I love how he made the change-up cool again. Pitchers pile up strikeouts on blazing heaters or nasty curves, but he piled his up with one of the more deceptive change of speeds in the game. It is going to be weird to go to the opening series in 2013 and not see #33 on the mound.

Steve: There are far, far too many great memories of Shields to choose just one. He was one of my favorite players on the Rays, and it hurts like heck to have to see him go -- far more than it hurt when Matt Garza or Scott Kazmir were traded.

I suppose my favorite memory should be something Shields did on the field, but right now, I can't stop thinking about all the hi-jinks and personal moments. The way him and Price would joke around on the bench. Wearing that fake beard during Spring Training. The way he mentored the entire pitching staff, and instilled in everyone a desire to go out there and pitch as long into the game as possible. The way he would get so pissed after allowing a home run. That emotion could get him into trouble, but it's also part of what makes Shields Shields.

And speaking of emotion, who could forget this? 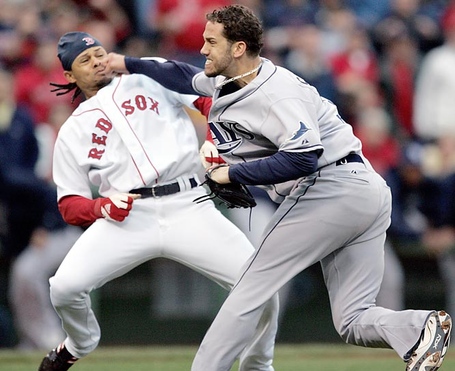