No, not THAT Roberto Hernandez!

The player formally known as Fausto Carmona - now Roberto Hernandez - is reportedly near a deal to joining the Rays in 2013.

Roberto Heredia Hernandez would presumably be signed as a ground ball specialist, taking the place of the recently traded Burke Badenhop as the staff worm-burner. The 32-year old Domincan has only played for the Cleveland Indians, previously with the club from '06-'12 as a starting pitcher. As such, RHH should be available as a long-man or to spot start, which would make him the first free agent starting pitcher signed under Andrew Friedman.

Hernandez once finished fourth in the Cy Young voting after the 2007 season, but has since fallen from grace. He missed the entire 2012 season due to identity-fraud, and has a reputation for mental breakdowns on the mound.

Here are some thoughts from the DRB Masthead:

Ian Malinowski: I love this. Assuming he's for the bullpen and not starter AAA depth, he's an intriguing project. Nothing obvious about him like there was with Rodney (drop the slider, throw more changeups), but I think he's got possibilies.

His stuff is truly unique. Not many sinkers like it. His success is pretty even between sinker, slider, and changeup, which means his pitch mix is close to optimal, but he does throw a four seam fastball which does worse than everything else. Just dropping that entirely will make him a bit more effective if he's not overexposed (in the pen). Throw a few more mph back onto everything too, and he'll be back at his 2007 velos. I'd expect an uptick in effectiveness across the board from that, too.

Sometimes his problem has been wildness and walks, sometimes it's been wildness and predictability inside the zone leading to getting rocked. I don't know jack about how to fix that, but obviously the Rays do (Benoit, Rodney, others).

I think with guys like Fausto, who are pitch-to-contact types, there's a hump. If they rely on inducing GB's, only giving up singles, and getting double plays, they can survive or even thrive with a normal BABIP. But when their control or their skills deteriorate to a certain level, they stop living by the rules of "Major League Players," and get more into the territory of a minor league guy where they can just get rocked, and high BABIP and HR/FB isn't bad luck any more, it's real. (I'm thinking of Fausto and Wang, in particular.)

All of this is to say that if a few incremental improvements across the board can get Fausto back over that hump to majore league quality, I think he could actually be really good out of the pen.

Steve Kinsella: Hernandez throws a heavy sinker and generates a lot of ground balls. With the Rays defense and shifts and his heavy grounder, he may be an effective mulit-inning reliever as well and may be able to fill the Davis/Badenhop roles. Jose Molina and framing can greatly enhance the value of his sinker. He did well when he had a veteran like Mike Redmond handling him.

He also is a head case. When he loses his temper things go south in a hurry. Second problem is his HR/FB problem And I've seen several times where he is frustrated and throws a get me over fastball that goes a long long way. One game the great Saber manager Manny Acta started that defensive wizard Orlando Cabrera at 3B (with a groundball pitcher on the mound) in his first EVER start at third.

Well, with runners at 1st and 2nd and 2-outs, the grounder came towards Cabrera to end the inning. It was more of medium high chopper, the type you cruise in on and either scoop on the run and throw, or get around a favorable bounce and step on 3rd, or throw to first. Cabrera kind of moved in and waited... the ball hit the bag... a run scored, and up comes Jason Giambi. Carmona, obviously pissed off, lays a fastball right down main street and I think it's still going...

Hernandez can compete for a starting job in ST and if he looks good a team desperate for pitching may try to acquire him. Baseball is a funny game. Guys like Archer who have a rough spring find themselves back in AAA and guys like Niemann who ended the year banged up suddenly remain banged up (Farnsworth).

One has to wonder how confident the Rays are with Niemann's health. Could the Rays have a trade for Niemann or Cobb in the works? Carmona is justifiable added depth in the short term while Odorizzi and/or Archer work in Durham.

A team can never have enough pitching. So much can happen between now and opening day its almost silly to try and forecast where Carmona will or won't be. All we could probably hedge our bets on is that he will be stretched out as a starter in Spring Training, that he will pitch from a full windup, and that a decision will be made then.

Note: The signing is not to be confused with this Roberto Hernandez. 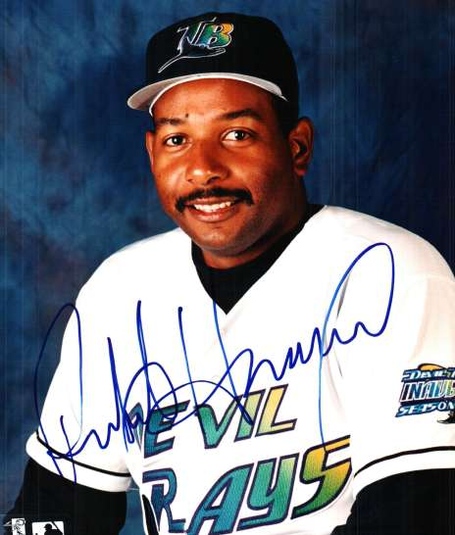 The pictured Hernandez is the Rays' all-time saves leader, and pitched for the club from 1998-2000.