Yesterday, the Rays traded their groundball specialist for a player who is best known for either his father's name or forgetting to step on home plate while playing in rookie ball last season. Badenhop brought a skill that the Rays have had in the bullpen each of the past few seasons: a right-handed reliever that had a high likelihood of generating rally-killing doubleplay groundballs when needed. Much like the "closer" role with the team, that groundball specialist has been a revolving door with the likes of Lance Cormier, Chad Qualls, Adam Russell, and Badenhop doing their work and moving on. Who might fill that role in 2013?

According to Matt Swartz of MLBTradeRumors, Badenhop was projected to make $1.6M in arbitration as a groundball specialist capable of pitching in key double-play situations, facing right-handed hitters that were prone to groundballs, while pitching in mostly low leverage situations. Not that $1.6M is a crazy figure for those skills, but those types of skills are rather replaceable on the open market.

Badenhop was essentially a two-pitch pitcher last year throwing sinkers and breaking balls with the occasional show-me change-up. It is a recipe that he has used now for four full seasons in the major leagues which has resulted in the following outcomes:

The data at BrooksBaseball shows his results and averages for his pitches each of the last four seasons. When examining that data, Badenhop's BABIP by pitch type is rather interesting:

The sinker is his primary weapon and his BABIP for that pitch for his career is .319. The 2011 batted ball results as well as the ERA-FIP were likely two of the things that attracted the Rays when seeking out Badenhop last off-season when it was rumored the Marlins were going to non-tender him. Despite moving from grass to the Astroturf at Tropicana Field, Badenhop saw his sinker's BABIp drop 90 points last season to a career-low .278. This improvement was in no doubt driven by the excessive defensive positioning the Rays do on the infield compared to most other teams. In 2011, Bill James calculated the Rays used 216 shifts when a ball was put in play, which is at least three times more frequently than the Marlins.

One option the Rays could consider to fill the groundball machine vacancy is free agent reliever Jamey Wright. The 38 year old reliever has pitched in the major leagues since before the Tampa Bay franchise came into existence, and has spent the last six season as a groundball specialist for the Rangers, Royals, Indians, Mariners, and most recently, the Dodgers. He was granted free agency after this past season, the third straight season he had been paid $900K by an employer. His most recent contract was a minor league deal with an invite by the Dodgers who added him to the 40-man roster just before the end of Spring Training.

Wright is a three-pitch pitcher who uses a sinker, breaking ball, and a cut fastball. The table below shows his BABIP by pitch type over the past four seasons:

Wright's 2012 season looks similar to Badenhop's 2011 season in terms of the outlying BABIP. While last season's .354 is close to 2009's .339, it is important to note that Wright pitched for the Royals in 2009 who had the league's worst UZR/150 rating by a significant margin that season. In 2012, the Dodgers were in the middle of the pack.

Wright does have some swing and miss capabilities as well, particularly with his curveball. Last season, he struck out 18 percent of the hitters he faced, a rate he had not approached since working as a starter for the 2003 Royals. 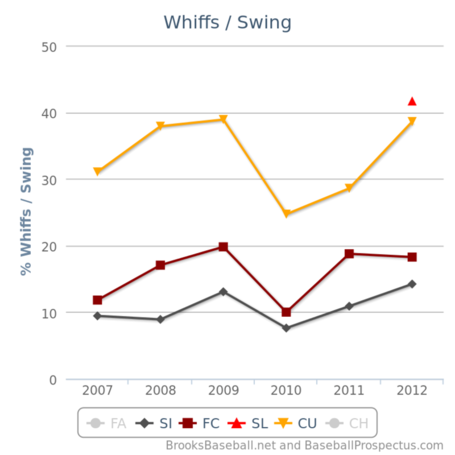 Wright has made a transition of sorts in the past two seasons as he, like Fernando Rodney last year, has moved on the pitching rubber, but in the opposite direction. Wright now pitches off the third base side of the rubber and the move lines up rather well with the improvements in his whiffs per swing rates. 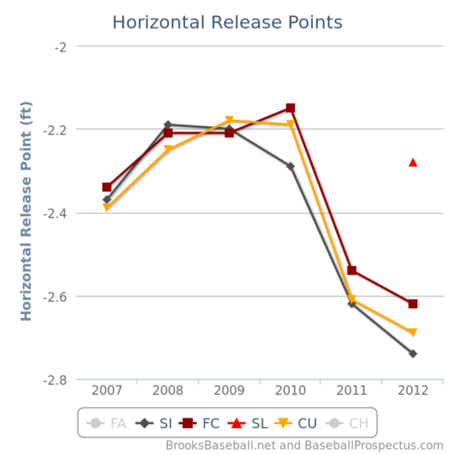 Wright has signed a minor league contract with an invite to the major league camp each of the past four seasons. Odds are, he will do that for a fifth straight off-season sometime in the next few months and once again make less than $1M for whoever he works with. His high groundball tendencies certainly fit the profile of the turn 'em and burn 'em approach the Rays have used for low leverage/groundball specialists in recent seasons and the defensive prowess of the club could be another perfect match for a groundball specialist coming off some batted ball misfortunes in the previous season. The Rays could also be thinking about handing the role over to Josh Lueke, but an experienced Wright would be a rather cheap insurance policy to have in camp in case that plan does not work out.