Share All sharing options for: Thoughts on James Shields, Part 2

In this two part series, I will look at various aspects of James Shield's 2011 performance and how if could affect his 2012 season. In the first part, historical comparisons to Shield's workload increase will be examined. In the second part, I will attempt to see if James Shield's success in 2011 is sustainable.

Sabermetrics (and reasoning) always teach us to regress to the mean. Did player X have the best year in his career? Expect regression. Did player Y play dismally compared to his career numbers? Expect regression. Our objectivity depends on it, because our emotions often want us to believe that James Shield's 249.1 innings in 2011 are far more important than the 977.2 other innings he has pitched in his MLB career. Don't worry, though,the topic of this post is not an extensive, monotonous, and repetitive discussion regarding regression analysis.

The real issue at hand is to determine whether Shield's 2011 numbers, a year in which he posted his highest WAR, lowest FIP, and best K%, must be heavily regressed. As will be seen, the answer to that question is no. Regression to the mean is to be expected. But the real question is the following: what is the mean (average) for James Shields?

In 2010, Jose Bautista mystically transformed from an average hitter into an absolute freak of nature, slamming a whopping 54 home runs and posting a 166 wRC+. So naturally, he should have regressed in 2011, right? Nope. Instead, Bautista went on to have an even better year, performing to the tune of 8.3 WAR.

Does this mean that regression is wrong? Not at all. However, when a player significantly transforms or develops his game in a physical manner, there is a reason to try to identify a new mean to regress towards. In Bautista's case, a certain change in his swing or alteration in his approach led him to become a superb hitter. James Shield's present standard lies in his new curveball.

The graph speaks for itself.... 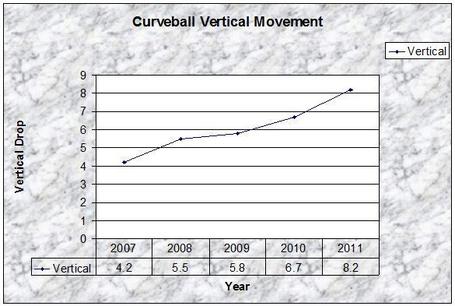 As shown, Shield's curveball maintained its velocity and horizontal movement while adding quite a bit of depth in 2011. I can't find Shields mentioning that he consciously changed the pitch, so its development may be more of a natural occurrence than an actual plan.

Has his new curve, which features greater depth, had better results? Absolutely. Below are two stats used to gauge the effectiveness of his curveball. The first is self-explanatory, since it looks at the percentage of times a batter whiffed when swinging at the curveball. The second chart looks at "Pitch Type Linear Weights." Briefly, it can be stated that this method attempts to place a value on a player's certain pitch. 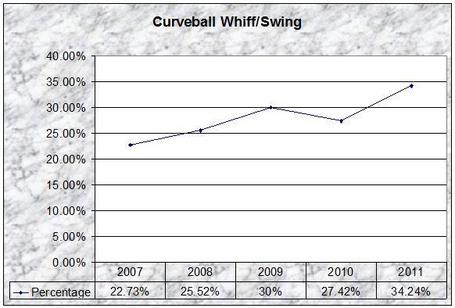 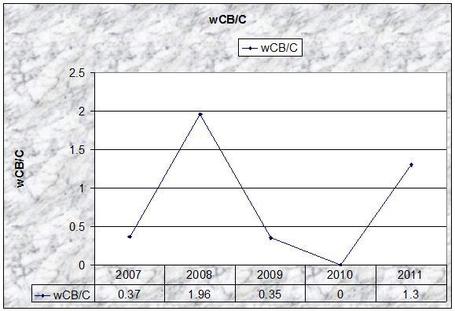 Excluding a fluky 2008 (his curveball didn't change at all and his Whiff/Swing% doesn't correlate with his wCB/C, so the results are probably a result of luck and random variance), his curveballwas at its best in 2011. He threw it differently (more vertical movement), getting more swings and misses(Whiff/Swing)and getting better overall results (wCB/C).

These factors all helped play into his excellent FIP (FIP is a stat along the lines of ERA, except in that it neutralizes defense) in 2011. Possessing two lethal pitches (both his curveball and changeupwere among the top 15 in their categories using linear weights), James Shields wisely adjusted his approach. If you lack a good fastball and have two lethal offspeed pitches, why rely on your fastball? The chart below shows the change in approach. 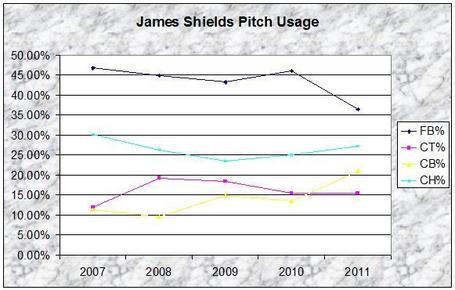 Better overall results were a product of this changed approach. In addition to having his lowest full-season FIP, the most innings pitched in his career, and the highest WAR of his career, Shields also showed improvement in overall contact numbers, as shown below. 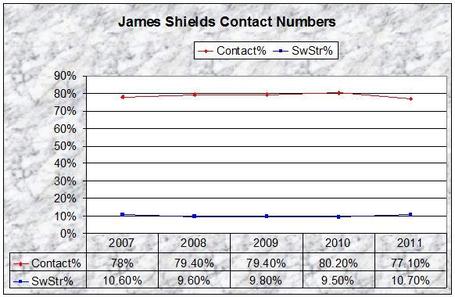 So is Shield's 2011 success sustainable? It should be. It seems logical that the addition of his excellent curveball makes his 2011 success sustainable. Barring the sudden loss of his curveball, there seems little reason to believe that James Shields shouldn't have comparable success next year. So while the projections may forecast significant regression, do not be surprised to see Shields enjoy similar success in 2012 as he did in2011 due to theaddition of his outstanding curveball.