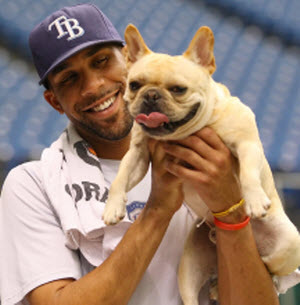 Rays pitcher David Price (@davidprice14) is one of the most twitter friendly professional athletes on the internet. He is also the proud owner of a French Bulldog named Astro (@Astro_DPsDOG) .

Astro will be turning 3 years old on May 21st of this year and has already appeared in an interview with David Wells, has attended a game where he was being honored with his own bobblehead that included his dad, and allowed his dad to escort him as a Grand Marshall of the Gasparilla Parade.

He has also gained popularity over the past two seasons with the Rays and their fans and looks forward to watching his dad and the rest of the Rays chase down a World Series Championship in 2012. Astro (who will only shake with his left paw) was gracious enough to answer a few questions about his role with the Rays and how he handles the season of watching Rays baseball.

Q. You have gained quite a following on Twitter and I see you recently broke the 1000 follower milestone. Do you have any goals that you are looking to achieve regarding social media?

A. Yes! I want to get to 1,500 followers by the All-Star break and 2,000 followers by seasons end. Anything the Draysbay readers can do to help me out would be greatly appreciated.

Q. You are only 2 1/2 years old. How did you learn to speak and communicate in English well enough to maintain a Twitter account?

A. My dad got me a French Bulldog to English dictionary and a Rosetta Stone CD to listen to. It really does work. I am considering doing a testimonial for the Rosetta Stone people.

Q. What is your favorite food?

A. Bacon. I love the stuff. If real bacon is not available I absolutely love Beggin' Strips. If fans want to sent me Beggin Strips they can send them to Astro the Dog c/o David Price at 1 Tropicana Field, St. Petersburg, FL 33705. I often get gifts sent to me and it is one of the things I look forward to when my dad comes home and it makes Evan Longoria (@Evan3Longoria) really jealous.

Q. What are your favorite leisure time activities?

A. I consider myself a gamer. I especially like playing FIFA with my dad and I constantly beat him. Even though he doesn't acknowledge my dominance on his Twitter account...I let it slide. I also like to play with empty Gatorade bottles, sunbathe, chase my dad's nephew around the house, practicing my warrior stance, driving around town with Grandma and Grandpa, but the my favorite leisure activity is far and away long belly rubs.

Q. You have certainly gained media exposure over the last two years. Is there anything that you really want to do which involves the media?

A. Yes, I'd like my dad and me to be on the cover of MLB2K13 or at the very least I'd like to be included in the game in some way. I'd also love to be on the MLB Network and be interviewed by Jon Heyman (@JonHeymanCBS). I've also been asking over and over again to be interviewed on Intentional Talk (@intentionaltalk). I guess the folks over at MLBTV (@MLBtv) haven't figured out how to spike ratings yet. I've asked the good folks at RaysBaseball (@RaysBaseball) to help but I haven't received a response from them yet.

Q. You don't travel on the road with your dad. What is the hardest part of the separation.

A. Well, it's much easier when my dad gets a hottie to look after me but more often than not I'm stuck with some dude. Other than that, just being without him for 10-12 days is difficult. I can't stand when I see him packing the black bag knowing that I'm going to be on my own. But watching the Rays on SunSports (@SunSportsRays), catching an update from Todd Kalas (@ToddKalas), or putting the earphones on and listening to my main man Dave Wills (@DaveWills34) cover the games is always a welcome treat.

Q. What is your favorite thing to do at Tropicana Field?

A. I like to race anyone at anytime. I have a lot of energy and bolt around the warning track and dare anyone to challenge me. After I get done embarrassing guys with my speed I like to chill out in the bullpen with Jose Molina (@JoeyCatch8), Jose Lobaton (@JoseLobaton31), Sam Fuld (@SamFuld5), and Ben Zobrist (@TheZobrists).

Q. Speaking or running around the warning track -- this question is a little more on the serious side and I'm just looking for a bit of the truth here. Back in 2010 Marc Topkin of the Tampa Bay Times (@TBTimes_Rays) wrote a story about an indiscretion during a pre-game workout. Is there any truth to the story?

LHP David Price running in Trop outfield w/his dog, Astro. Looks like Price had to do a little "clean-up" on the warning track, and got no help from the bullpen.

A. {Rolling Eyes} Absolutely not! I can not be more emphatic about this. Topkin was sitting near the warning track scribbling away in his little notepad and missed the whole scene unfolding right in front of him. There are these two squirrels that travel around MLB stadiums. They come out as in game entertainment and they were in town to work the playoff game. They were out rehearsing their routine when one of them couldn't hold it and crouched down on the warning track. Afterwards, they immediately sprinted off the field leaving me standing there looking guilty. My dad came over and didn't know any better and that's when Topkin heard Matt Joyce (@sweetswing20), Reid Brignac (@reidbrignac), and Sean Rodriguez (@SeanJRodriguez1) cackling and guffawing like school girls. Against my objections my dad cleaned up the squirrels mess. Through the whole conspiratorial mess my dad and Joe Maddon (@RaysJoeMaddon) have supported me. Topkin should really check himself and quit publishing these unsubstantiated claims.

Q. We have heard from both Topkin and Bill Chastain (@wwchastain) that you like to run around the warning track. Have you raced any of the Rays players? If so, who won?

A. Well, I don't want to brag but I did take on BJ Upton (@BJUpton2), Desmond Jennings (d_jennings8) and Sean Rodriguez in a 100 yard dash last year and the results weren't even close. I smoked all three of them. To this day they all seem to have a problem making eye contact with me. What I find most insulting is their assertion that I only won because I got off to an early lead and had gas.

Well Astro, I want to thank you for your time here today and I'll see what we can do about getting you some more followers on your Twitter account. I'd like to leave you with a little interview that your dad gave a local tv station. He had some very kind words to say about you.

"I've got a little French bulldog named Astro," he explained. "He's a big part of my life. I enjoy him a lot. It's good to go home every night and know you're going home to someone happy to see you, pumped up. I like Astro a lot." -myfoxtampabay

This interview concluded with Astro wiping a tear from his eye and taking his paw and double tapping his chest while saying "that's my dad...that's my dad."