Share All sharing options for: Fan Fest Special: Can the Rays Draw 2 Million Fans in 2012?

The Rays attendance has been and always will be a heated debate. Some will suggest the economic downturn plays a major role in the Rays inability to draw people. Others will cite the stadiums location or lack of corporate support. Inevitably, someone will chime in with the opinion that the Tampa Bay area just can't support major league baseball. As the chart shows below there was a considerable drop in attendance in 2011 but there were many reasons for this. So, why do I feel that the Rays are going to break the 2 million mark in attendance for the first time since their inaugural season in 1998? 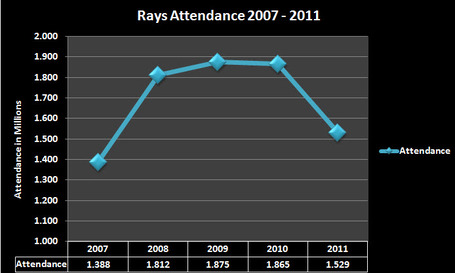 The average fan loses contact with the Rays over the winter. The only time many fans are exposed to the team is when they sign a player, make a trade, or lose a player. Often, their exposure is from the print media, main stream internet blogs, or *gulp* from a couple certain local sports talk radio airwaves. The 2011 offseason served as a sledge hammer to the average fan in terms of excitement as the fan was treated to one recognizable name after another departing either through free agency or trade. The team that had just won the AL East was, if you listen to sports radio, in a full rebuild mode. Who was going to be traded next and how long will it take for the Rays to get back to where they were in 2008-2010?

The energy was briefly restored with the signing of recognizable names Johnny Damon and Manny Ramirez. The press conference with the pair was as entertaining a press conference that a fan can ask for and ton the heels of the due signing the 2011 Fan Fest was also a huge unanticipated success as it was estimated that close to 25,000 fans showed up.

Any energy or momentum generated leading up to opening day seemed to fade after about the first 6 games of the season. The Rays lost their first three games at home against the Baltimore Orioles and lost 3b Evan Longoria to a strained oblique. They proceeded to lose their next two contests at home to the Angels before heading to Chicago where they lost the first game of the series to drop to 0-6. Not only were the Rays losing they were boring to watch, the offense was held to a single run in 5 out of 6 of the games.

Manny Ramirez who started the year with a miserable 1-17 performance and had been booed by the home crowd wasn't in Chicago for the first game of the series as he had to stay in Tampa to attend to a "family matter". Manny would never make it back to the Rays as the next day it was reported that the slugger had failed another drug test and was going to retire rather than serve his 100-game suspension. The Rays averaged 17,276 per game in April.

The Rays finally gained some momentum in May and June and crawled back into contention. Unfortunately, they were not able to capture the fans attention as the Tampa Bay Lightning had made a surprising push to the playoffs and were pitted against the high profile Pittsburgh Penguins, Washington Capitals, and Boston Bruins. By the time the Hockeybay magic had worn off it was nearly June. The Rays averaged 18,875 per game in May.

On June 1st the Rays were 29-26 and only 2.5 games out of first place. The local media spotlight should of been shining directly on them especially with the lack of NFL news due to the labor strife. Unfortunately, on June 2nd the Rays headed out West to begin an 11 game road trip. Even though they survived the 11 game trip with a winning record they had lost an additional 2 games in the standings. The Rays were only home for a week before heading back out on the road for a six game trip to Milwaukee and Houston. By the end of June the Rays were 45-36 and only 1 game out of the wild card and 3.5 games behind the Red Sox for the division lead.. The Rays averaged 20,729 per game in June.

The Rays started to win again by playing 18-10 baseball in August but they ended the month they had a record of 74-61 and were 9 games behind in the wild card. At this point most fans figured the team was still in play out the string mode. No team had ever come back from such a deficit in the history of baseball. The Rays averaged 15,672 per game in August.

September was a magical month at Tropicana Field but not many people truly believed the Rays had a chance at the playoffs until the latter part of September. Of course, the Rays did come all the way back and captured a playoff spot in the final game of the season. The attendance in September did rebound back to 18,943 per game.

Last offseason there was a term bantered about the "Nightmare Scenario" which dealt with the worst possible outcome for the Rays in terms of compensation picks depending on where Rays free agents signed. In terms of attendance, momentum, energy, or any other phrase that can be used to describe what forces attract the average fan to the park the 2011 season was the nightmare scenario for the Rays.

This past offseason has been void of trading any of the well known Rays. The Rays even got the band back together and re-signed Carlos Pena. They brought in veterans Luke Scott, Fernando Rodney, and Jeff Keppinger. Every fan of the Rays got to see the special ability of Matt Moore in full display as Joe Maddon started him in Game 1 against the Rangers in the ALDS and the Rays signed him to a long term contract which all but guarantees that he will begin the year as a member of the rotation.

The front pages of the paper, sports radio, mainstream media blogs, and the four letter network have not been touting the New York Yankees or Boston Red Sox offseason transactions as moves that guarantee one of them their rightful spot as the representative for the American League in the World Series. Many experts are touting the Rays as the team to beat in the AL East!

The Rays are in excellent position to push the attendance back up to the 2009/2010 levels of 1.875 million. With the events that transpired this past offseason, a fast start out of the gates, and a first place lead as they approach August the Rays should be poised to break the 2 million mark in attendance in 2012.