Ben Zobrist: The Guy We Should Have Predicted

Share All sharing options for: Ben Zobrist: The Guy We Should Have Predicted

When the Tampa Bay Rays traded for Ben Zobrist in the Aubrey Huff deal, the young shortstop was in the middle of an impressive season at Double-A, but many of us Rays fans figured Mitch Talbot was the biggest prize -- the 6'2" righty whose career has since spiraled back to the minors.

Zobrist, to us -- or at least myself -- was an infielder with good patience, not the doubles mashing, homer tatering, multiple position fielding, God-thanking Zorilla he is today. And when he did transform into that, it was only after two of the most miserable season in his career, a precipitating event that not only caused him to move away from shortstop, but also put our (read: my) Ben Zobrist expectations six feet deep.

After he shattered our early, gray and disappointed impressions, we began to look for reasons as to how and why. When my colleague and friend Tommy Rancel uncovered news that Ben Zobrist had used a newfangled hitting coach in the offseason between 2007 and 2008, I and many others began to think Zobrist embodied the model of the turnaround player -- the guy who truly incarnated the hope of being able to go from puke to hulk overnight (y'know, without the cream and such).

Somehow, through all of this, we were just not being terribly honest with Zobrist's numbers. The truth is: He was good all along.

In behavioral economics, there is a phenomena known as framing. When we go to a swanky restaurant or shop for purchasable goods online, many smart business owners lure us into spending with this technique -- they will introduce a number to us to start our reference point to make something seem cheaper or more expensive by comparison.

In one of my graduate economics classes, our professor asked us to all write down the last two digits of our respective social security numbers and then had us conduct a silent auction for some hypothetical gift package. Almost invariably, those with SS numbers ending in 00 to 49 underbid those with 50 to 99 ending digits -- our bids correlated directly with our SS numbers.

The mere sight of the other number on paper, sitting there, giving a mental reference point -- even though it was completely unrelated to the value of the gift package -- obfuscated the otherwise admirable mental capacity of the students.

I cannot speak for everyone else, but this is certainly what happened with me for Ben Zobrist.

Zobrist hit the majors like a bird hits a window pane. He slapped weak grounders at eye-rolling infielders, he flubbed balls at short, he swung at bad pitches, he looked like he had no control over his body -- he simply looked hopeless. Maybe his time in the batting cages between 2007 and 2008 really did help him calm down and focus, but if we want to be free of framing, we need to look at the entirety of his numbers.

First of all, to do so, I'm going to employ the services of Weight Runs Created Plus (wRC+) and Should Hit (ShH). I would probably prefer to use wRC+ for all of this -- because Zobrist's doubles power gets largely undervalued by ShH -- but unfortunately FanGraphs does not have his first two years in the minors.

Despite that, ShH -- which has a nice simple formula and only requires PAs, BABIP, HR totals, BB%, and K% -- serves as a pretty decent proxy for wRC+, as we can see here using FG's abbreviated stats: 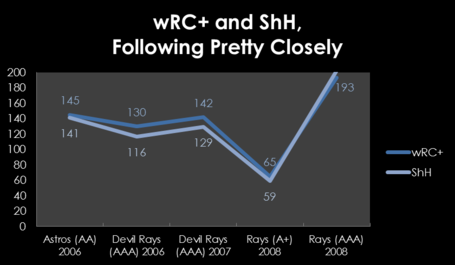 We can see how ShH sticks a few points under Zobrist, but in general, it stays within 0 to 15 points away from his wRC+.

Anyway, thrust your eyeballs upon this: 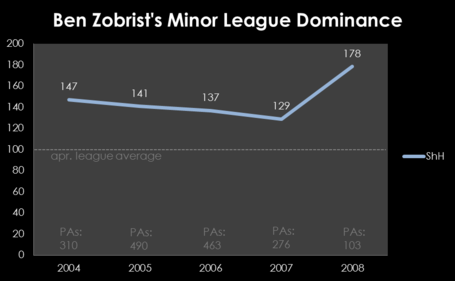 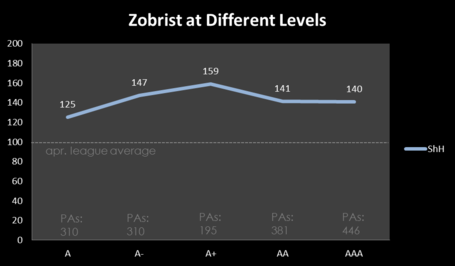 Overall, Zobrist finished his some 1600 minor league PAs with an ~140 ShH -- that's 40% above the approximate league average (approximate because ShH is not actually using any league numbers). Was he older than some of his leagues? Yeah. But he was also playing shortstop and simply crushing the minors.

Let us return to those first two years for a moment:

In other words: the surprising part of Ben Zobrist's career did not occur in 2008 when he became the late inning lightning, the Zorilla, but rather the 2006 and 2007 seasons where he played part time and played part crap. 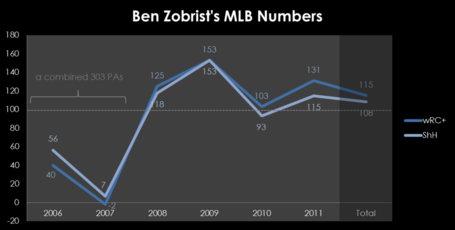 Zobrist has had rough spells in the majors -- including his 2010 season, though he still hit better than the average second baseman that season -- but when we look at the whole of his career, his minors included, we should be relatively unsurprised he has performed well.

Which brings us to Reid Brignac. Last year, the Cajun looked hopeless. He looked Ben Zobrist bad, hitting a 23 wRC+ with a .254 BABIP. But does that mean he's not cut out for the big leagues? No. His minor league numbers -- and his previous time in the majors -- suggest he can and should hit in the 80 to 89 wRC+ range, which is acceptable for a shortstop with strong defense.

Does that make him a better shortstop candidate than Sean Rodriguez? No. Probably not; at least not with B.J. Upton still on the roster.

And consider Elliot Johnson too: Many of us have already written him off after just 200 MLB PAs -- and this is a strong defender who over the last 6 seasons only once hit under 100 wRC+ in the minors! Including his lowest levels in the minors, Johnson has a 98 ShH -- well above average for a strong-defending shortstop.

His age and seemingly stunted development (why else would the Rays leave him in Durham so long?) makes him an unlikely candidate for a starting role in the majors, but he certainly fits the backup infielder role perfectly.

So we might be wise to give more leeway to Brignac and Johnson and other who get cold early -- they may just turn into the next guys we should have predicted.