Share All sharing options for: Robinson Chirinos and Premature Judgement

Objective: To determine if Chirinos struggled controlling the running game by looking at the process instead of the results.

Conclusion: Chirinos still needs some work behind the dish, but his throwing is not nearly as bad as it is often portrayed, and the addition of Jose Molina should benefit Chirinos's development.

Yesterday, Bradley Woodrum posted an excellent article about Ben Zobrist, explaining that Zobrist never recieved the credit he deserved in the minor leagues as a shortstop who could mash (think hit well). One bad year from Zobrist clouded the objectivity in analyzing him. It seems so often that in sports the last or most recent year receives the most focus and attention in evaluation when a larger sample size is endlessly more meaningful. And, once again, it appears it may be hampering the fair judgement of a certain player, this time Robinson Chirinos.

Heading into the 2011 season, optimism abounded for Chirinos. Rated the 16th best prospect in our community prospect list, Chirinos was praised for his ability to both hit and defend. Only his age (or more specifically, Age Relative to League) dimmed his prospect status. Yet, it seemed that the switch to the catcher position, not age, ignited his bat, leading him to hit for a .407 wOBA over two years (2009 and 2010) and 692 PAs. In addition to showing an aptitude at the plate, Chirinos also shined with the glove, nabbing 30% (a little above average) of potential basestealers while drawing positive reviews for other aspects of his defensive game.

Kevin Goldstein (who rated him the 12th best prospect in a solid Cub's system):

"This converted infielder is improving defensively, and he can really hit."

Chirinos is a recent convert to catching -- 2010 was the first year he played nowhere but behind the dish -- and projects to stay behind the plate; his offense the past two years has been inflated by his age relative to league, but the standard at catcher is so low it seems hard to believe he can't be a starter for someone in the majors.

Baseball America, after ranking him the best defensive catcher in the Cub's system, overviewed the Garza trade and noted this about Chirinos:

Though we pegged him as a good option, Chirinos passed through the Rule 5 draft in 2009, and he responded with his best pro season in 2010, earning a spot on the 40-man roster. He has a chance to be an excellent utility player as a converted infielder who has become a good defensive catcher. He threw out 30 percent of basestealers with Double-A Tennessee this year, posting 1.95-2.05 second pop times, and is good enough defensively to contribute at that position in the majors in 2011. His speed is his only below-average tool, and his plate discipline helps his average power come out in games.

So why has Chirinos fallen off the radar?

Despite having an excellent spring training, Chirinos was sent down to AAA Durham to get more experience behind the plate. Surprisingly, Chirinos scuffled in Durham, showing ineptness both at the plate and behind it. Despite this, a Jaso (and then a Lobaton) injury forced Chirinos to the major leagues, where he hit to a tune of .218/.283/.309 (68 wRC+).

However, it wasn't his bat that disappointed many; moreover, his inability to control the running game became glaringly obvious. The opposition stole 21 bases in 20 games while only getting caught twice.

Was Chirinos that bad at controlling the running game, even though his prior minor league SB% numbers were fine and scouts positively rated his defense? Thanks to MLB TV, I looked back at every stolen base attempt, clocked his pop times, made notes, and gathered together the data that is represented in the following charts.

The numbers are not easy to read, but they give a simple breakdown of the data, including the pop times. I gathered the numbers by using a stop watch and timing the amount of time it took for him to make the throw (the time starts when the ball "pops" in his glove and ends when the shortstop, second baseman, or third baseman recieves the ball).

Admittedly, the times could be slightly off. However, I can't imagine that these times are off by much more than .10 seconds. With a 1.95 total average, these numbers are similar to the numbers Baseball America mentioned in their scouting report (1.95-2.05). If 1.95-2.05 is correct, his pop times are a tick below average (45 grade on the 20-80 scale). 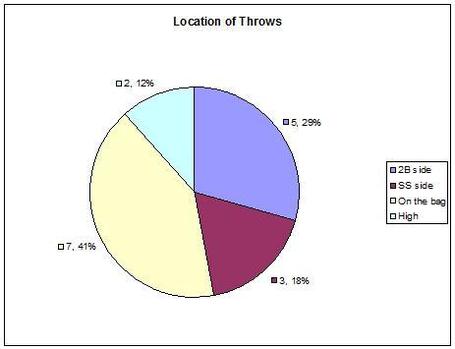 Green is high, blue is to the 2B side, purple is to the SS side, and tan is on the bag.

Besides for the time of the throw, the location is also a critical factor towards success.To clarify, these are the general directions of the throws. A few of the ones labeled "on the bag" may have been a tad low. Hopefully these relay a general sense of where he was throwing the ball, and, if anything, show that his accuracy was not a major issue.

So if his pop times and accuracy were not major issues, what caused him to be stolen on so much? Other factors included the pitcher during the throw and the number of throws made. These are illustrated in the charts below. 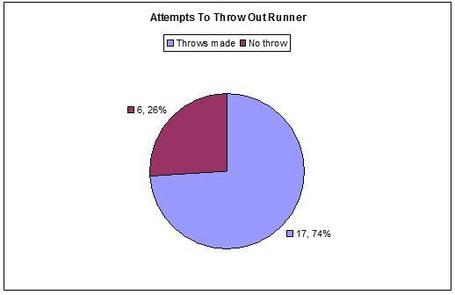 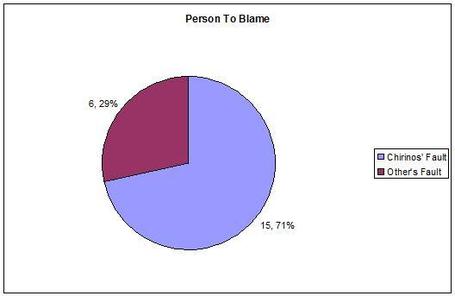 Five of the six "no throws" can directly be blamed on the pitcher, since Chirinos had absolutely no chance of throwing out the runner because the pitcher failed to keep runner close. The other stolen base faulted to "other" was the direct result of Rodriguez bobbling and fumbling a perfect throw. It is important to remember that Chirinos is still faulted with the occasions in which his pitcher was slow and unhelpful. 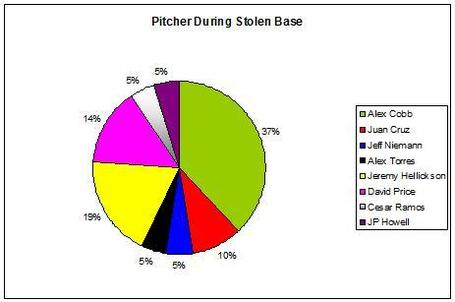 Cobb is green, Cruz is red, Niemann is blue, Torres is black, Hellickson is yellow, Price is pink, Ramos is white, and Howell is purple.

So we can see that Chirinos is not to be fully blamed for the numerous stolen bases. His pop times and location of the throws suggest he is only slightly below average.

An important factor to consider for Chirinos's future is the addition of Jose Molina. John Gregg, an analyst here at Draysbay and also the Publisher and Senior Editor of Rays Digest interviewed Robinson Chirinos this Spring Training. John asked Chirinos about Jose Molina, and a few quotes are listed below (the full interview can be found here).

You know what is funny? I always say you can't know what happens. Last year, when I was up, we were playing against the Blue Jays at home. I was having trouble throwing to second base. So I saw him... he give me some secrets, some advice..... when I saw we signed him, I was so happy because I know he is going to help me a lot this year."

Chirinos is being severely underrated, and he may currently be the best catcher on the Ray's roster. Can you imagine the Rays having a catcher with average defense and an above-average bat? I'm psyched and extremely eager to behold what Chirinos can do in 2012.