For those that didn't know, I spent a couple of days last week down in Port Charlotte catching Rays' spring training.

There wasn't a lot going on. A lot of stretching, throwing and conditioning work. Perhaps not the most interesting stuff to most people. It wasn't really to me either, but it provided me a great opportunity to play around with my new fancy camera.

If you haven't checked out all of the photos I took, the links to the galleries on my FaceBook page are here, here, here.....and here.

Some photos are better than others, but a professional photographer I am not....yet.

I focused on talking to and watching the guys who are in camp as non-roster invitees or are on the bubble for making the squad, because my goal on Rays Digest this season is to cover the minor leagues. In that vein, the majority of the notes after the jump are on guys who likely won't break camp with the team, but who very well may get their opportunities later on the year.

Jose Molina: A lot of articles have been written the past week about Molina's presence in camp including a fine one here on DRays Bay by mr. maniac on how he might help potential back-up Robinson Chirinos and one written by Chris Girandola on Rays Digest. So at the risk of beating a dead horse...Molina is going to make a HUGE impact on this team.

He definitely stood out on an otherwise uneventful first day of workouts. I saw Matt Bush, Jeff Niemann and James Shields throw bullpens to him and he was coaching, encouraging - and at times - even chiding all of them. And they were listening.

A lot has been discussed on this site and others about his framing ability, but it is still worth mentioning that not only does Pitch/fx data show that he is a master at it, but the pitchers themselves can tell the difference Molina makes behind the dish....even in bullpens.

Consider the following quote from Matt Bush (who I'll talk about in a moment):

""I could definitely tell. His body position and the way he kind of surrounds the plate - even though he’s setting up away - it’s almost like even if you don’t hit that spot you can tell that you’re going to get calls because of the way he positions himself. Where he wants the ball - if you hit it there - his glove doesn’t move. You can definitely tell that he has been doing it for a very long time."

So we all know that he can frame pitches and that that very well may be his biggest asset behind the plate, but it his approach to catching and his willingness and desire to teach and mentor that I believe are even more important.

Robinson Chirinos was literally gushing about the opportunity to work with Molina and called it "a gift".

Joe Maddon called him "a technician" who "takes his craft very seriously."

And there were plenty of others that raved about him as well including Shields and Niemann. And I don't think any of these comments were your standard "party-line" quotes.

The upgrading of the offense and bullpen may have gotten the most attention this off-season, but the under-the-radar signing of Molina is just the kind of Friedmanesque move that could be the deal-breaker in how much this team truly improves in 2012.

It is pretty impressive that one player can stand out so much when essentially all the players were doing was just conditioning and drills....but Molina did just that.

Matt Bush: First off...Matt Bush throws VERY hard. I knew this, but had never seen him live. Even though it was just a bullpen and there was no radar gun, his velocity was impressive just to the naked eye. I also saw him throw some nasty breaking pitches as well. (It's worth mentioning that on the the first day of camp, media members were allowed to stand along the right-field wall of one of the fields that offered a clear view of the bullpen area. The next day that area was off-limits and my personal feeling is that the media the day before had seen or heard a little too much of Molina working with the pitchers. You could hear him very clearly.) 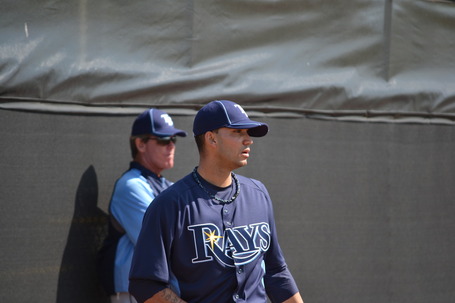 It was my interview with Bush after workouts though that stood out.

Forget whatever you have seen or read about him with his previous franchises (Padres and Blue Jays), Bush is not the entitled and immature guy he was then. He is genuinely humble and soft-spoken and I literally left the clubhouse saying to myself: "That was Matt Bush?"

Of course for all I know it was a show for the media, but by all accounts his off-field issues and problems with booze are behind him and six years have past since he was the number-one-overall pick with the Padres. The guy I talked to was happy to be in big league camp and even mentioned that AAA Durham would be just fine with him to start the season as "it's as far as I've ever been."

Matt Bush sounded to me like a guy who has turned the corner personally and has been humbled by his past experiences. People DO change and I believe Matt Bush is a guy who has.

For what it's worth I can very easily see him and Lenny Linsky at the back-end of the Rays bullpen in a few years.

Will Rhymes: I have a full-feature planned on Rhymes for Rays Digest either today or tomorrow. But he told me that the deciding factor in his signing a minor league deal with the Rays was their "merit-based" approach. In other words, the fact that guys like Carlos Pena and Casey Kotchman have come to the franchise on minor league deals and then ended up not only being regulars, but key contributors to play-off teams, was not lost on him.

It remains to be seen if Rhymes will see any time with the big club in 2012, but I think it is interesting to note that the word is out in the league on the Rays and the opportunities that can exist for players coming to Tampa Bay.

Alex Torres: Torres's career minor league walk rate is troubling (5.0 BB/9) and his command is seemingly the last hurdle for him to clear to become a dominant major league hurler.

For what it's worth - Torres told me that he worked on his release point extensively in the off-season and that his goal this season is to cut down on his walks because "they killed me the last couple of years. If I do that, I think I should be fine."

Torres is on the outside-looking-in at a spot on the Rays Opening Day pitching staff, but he also re-iterated that he is fine pitching in any role saying: "I'm gonna be there. Any situation, any day, any inning, I'm gonna be available for that situation."

Torres seems destined to start the year in Durham, but he figures prominently in the team's future plans and any efforts on his part to improve his command should be viewed as a good sign. Let's just see of he can actually do it.

Matt Joyce and Luke Scott: Two left-handed swinging outfielders who are key components of this season's offense. I'm just going to let the following picture speak for itself. But let's just say the two spent about 10 minutes comparing notes on their swings....with Scott doing most of the talking. 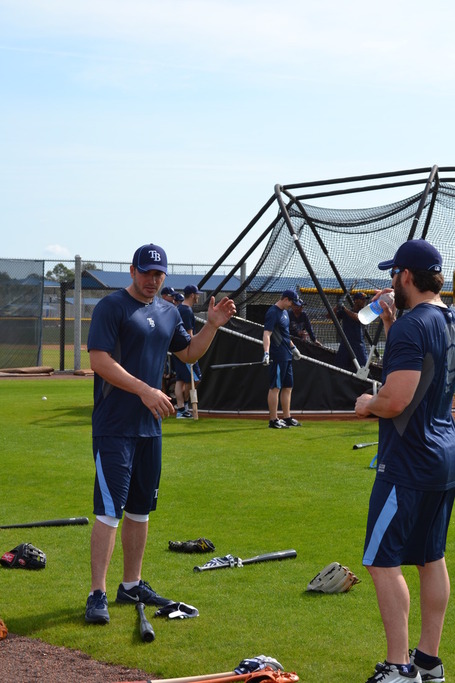 Tim Beckham: I'd be remiss if I didn't report on Tim Beckham. I've never seen so many varying opinions on a player's future outlook and I'll be willing to bet a buck that somebody says something about him in the comment section.

Unfortunately, I didn't see much.

He is a crappy first baseman...I can tell you that much. The position players were working out on their own and when I was there neither Carlos Pena or Juan Miranda was in camp yet, so the guys were all taking turns taking throws at first. Beckham missed every throw in the dirt that came his way. Not mind-blowing reporting I know...but it's all I got.

He did however give Rays Digest writer Chris Girandola a fist-bump and bro hug and said "thanks for the love" in the clubhouse. This no doubt refers to Chris's article on him last week.

I mention this because it's pretty obvious Beckham reads stuff that is written about him (as I'm sure a lot of players do) and apparently approved of the piece.

I'll say this once again for all of the detractors...the jury is till out on Beckham. I think we have all analyzed him to death. If he lays an egg at Durham this year, then maybe it will be time to pull the plug. MAYBE.

But for the love of God...what do people want to see from him? A 21-year old Alex Rodriguez? Not gonna happen. But the tools are there and players develop at different rates and I for one hope that he finally puts it all together and becomes a star.

Fernando Rodney: He has personality. At the end of his run around the complex he was doing kung-fu moves and karate chops. Therefore I have already dubbed him Fernando "Kung-Fu" Rodney and hope the name sticks. I didn't see his bullpen session, but Maddon and Hickey like what they saw apparently. 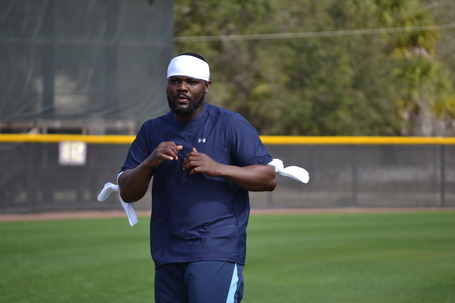 Some other notes: Sam Fuld claims that he can touch the rim on a basketball hoop (he is generously listed at 5'8" so that's some hops) and dunk a tennis ball. He also said that Grantland approached him about writing his now legendary piece for them.

There were about 100 or so fans there and most players spent time signing after the workouts. So if you are an autograph hound, it might be worth the trip down to Port Charlotte to snag some.

If you go....wear sunscreen. It wasn't hot, but my huge forehead is currently peeling from the sunburn I got.

I also spoke with Matt Mangini, Jhonny Nunez, Chris Gimenez and Josh Lueke. I'll have stories on them on Rays Digest this week. So you'll have to wait for news on them (from me anyways). I will say that Gimenez has a very engaging personality and that Matt Mangini talked a lot about cigars.

One last note on a player and this isn't so much a scouting report as it is a gut feeling.

EVERYONE I have talked to about Stephen Vogt - players, coaches, broadcasters - simply loves the guy.

I love him too. I can't for the life of me figure out why more analysts don't talk about him and the role he could play for the Rays in the very near future. He has hit at every level he has been at and although he isn't going to win any Gold Glove awards, has the positional flexibility that the Rays place a premium on.

I'm going to go out on a limb here and say that he plays at the Trop sometime this season and turns some heads. This isn't based on any sort of statistical analysis or reasoned argument - so feel free to fire away - but on good-old- fashioned instinct. We'll see I guess.

But they spelled his name wrong above his locker (Steven instead of Stephen) and when I asked him about it...he shrugged it off.

The guy doesn't even get enough respect from the guy who makes the nameplates.

Come on man! At least spell the guy's name right!

I leave you with a shot of Dane De La Rosa and his awesome mohawk.... 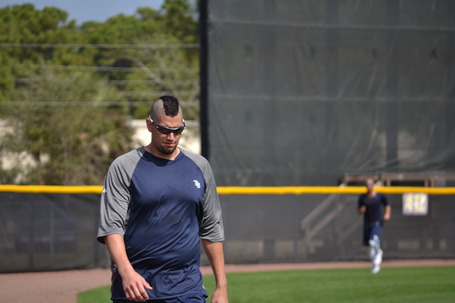