BK: A View From Behind the Curtain

Share All sharing options for: BK: A View From Behind the Curtain 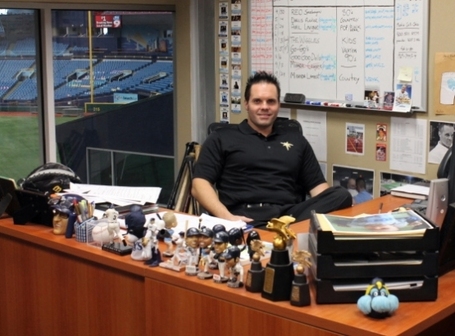 The other day, Rays Renegade had a wonderful post about departing Marketing Director Brian Killingsworth (BK to those that know him), who left the Rays for a Vice President role with the St. Louis Rams. Killingsworth has been a driving force behind the promotions you have enjoyed throughout the years and someone who has been reading this site since it has started as a way to keep a finger on the pulse of the fan base. It was not uncommon for him to drop us a note, chat us up about the strengths of social media, or come by and say hi when he saw any one of us at Tropicana Field.

We thought it would be a good idea for you to learn more about BK from another site reader, Kevin Orris, who had the pleasure of working under him during the first half of this past baseball season as part of an internship.

As a personal aside, BK was a great guy to get to know over the past few seasons and I wish him nothing but the best in St. Louis. If he can help facilitate trading the St. Louis draft pick to the Redskins so they can take RGIII, all the better!

December 10, 2009 was a day that I will never forget. After staying up late into the night preparing myself for the biggest day of my life, I was finally ready to depart for the Winter Meetings in Indianapolis, though I didn’t really know what to expect. I was just a nineteen-year-old kid looking to work in sports and hopefully land an internship to bridge the gap between my sophomore and junioryears of college.
After a three-hour drive through a dense blizzard and strong winds, I paid my $30+ to park and entered the Marriott Hotel lobby. I entered the room as a young baseball blogger looking to make a few connections. Instead, I spent the next six hours walking around in a circular pattern, trying to get my face on the MLB Network, and texting agents and various front office employees in hopes to meet up with them in their free time. It was closing in on 4 p.m. and the room was beginning to empty out, as did my hopes for talking to anyone of significance.
Then my phone rang. It was Doug Rogalski, an agent who arranged an interview between me and one of his former clients, Billy Butler. I was pretty nervous, but I managed to answer the call and arrange a quick meeting on a wooden bench on the second floor of the hotel. "Rogo" as I came to know him, did two important things for me that day. First, he told me that very few people work in baseball operations who failed to play the sport past middle school. Then he placed a call to Brian Killingsworth, the Senior Director of Marketing and Promotions for the Tampa Bay Rays. Killingsworth, or more commonly known by his peers as "BK," was a former catcher at Jacksonville University, one of the many schools Rogalski managed against in a stint with the University of North Florida.
Fast forward one year and four phone calls later, I once again found myself at the Winter Meetings, this time at Disney World in Orlando, Florida. Rather than standing alone, I found myself in the hotel lobby alongside Jason Collette when my phone rang. It was BK. He just finished dinner with Rogo and wanted to personally introduce himself to me. Just fifteen minutes later, I became a member of the Rays front office.
-----------------------
I always dreamed of working in Major League Baseball, especially with the Rays to help draw more fans to Tropicana Field. Although I had never actually traveled inside the concrete monster, I was sure that it couldn’t be that bad. It didn’t take more than a week of working under BK, when I came to a stark realization. The person that I always dreamed of becoming was exactly who he was.
I quickly learned that he was one of the lucky ones with an office facing the inside of the stadium; his resting directly above the Ray Tank in right-center field. His office was full of bobbleheads, figurines, signed photos, and a whiteboard that contained the names of musical artists including Avril Lavigne and Darius Rucker.
He created the entire promotions schedule, booked all of the concerts, assisted with social media, and serve as the mastermind behind Fan Fest. He had his hands in everything. His schedule was constantly booked with phone calls with various promotional vendors and meetings with other departments within the organization seeking his opinions. After all, he was in his 10th year with the organization and started as the lone employee in the Marketing Department.
In my five months with the organization, I don’t recall a day that passed in which I didn’t stop by BK’s office to talk about the latest baseball news or absorb information about the organization’s marketing tactics. We often discussed emerging trends in social media, ways to get the unconventional (a.k.a. DRays Bay) media more involved, and strategies other teams were employing around the league to draw fans.

Although it was never publicized, he was the mastermind behind ideas like the Gold Glove Replica Trophies that have become a staple on many promotional schedules, innovations like the David Price Superhero Action Figure (with Astro of course), the Summer Concert Series, and the Super Sam Fuld Superhero Cape.

He was the one who brought in the Long Haul Bombers, selected and designed the throwback uniforms, and most recently presented the "Zim Bear."

While BK spent most of his time entertaining the public with his various promotions, he managed to spend plenty of time keeping the internal staff entertained. In my first week on the job, he organized a flag football game including actual officials on the old turf before it was replaced. In May, we played an inter-office baseball game at a local diamond with local umpires. He absolutely loved to compete, no matter what the event was.

He also served as a family man. His two-year-old son, Cruz, would often stop by the office and take hacks with a small whiffle ball bat. In fact, if you ask BK, he’s going to be a left-handed catcher in the big leagues sometime around 2032.

When I first met BK at that Disney hotel, his first piece of advice was to learn everything I could about Bill Veeck. In the coming weeks, I read multiple books and articles and always walked away inspired to work in marketing. What I didn’t realize though, was that on January 10, 2011, I would begin working with a more modern version of Veeck.

No matter what sector of business you search, you won’t find someone who tried as hard as BK did. I speak for every past and current Rays employee when I say that BK played one of the most important roles in the Rays front office. Although he recently left the organization to join the St. Louis Rams as the Vice President of Marketing and Brand Strategy, I can assure you that his impact on the organization will last for years to come.