Share All sharing options for: The Rays 2012 Bullpen Competition

After the conclusion of the 2010 season the Rays front office was faced with the unprecedented task of having to replace six pitchers who appeared in 55 games or more during the season as Rafael Soriano, Joaquin Benoit, Grant Balfour, Randy Choate, Dan Wheeler, Chad Qualls signed elsewhere for contracts totaling roughly 68 million dollars. In meeting this challenge the Rays front office had to assemble a whole new cast of men for Joe Maddon to cobble into a bullpen for 2011. The amount of new faces and personalities in spring training caused Joe Maddon to quip that he felt more like a social coordinator than a major league manager.

As spring training progressed at least four spots were secure: Kyle Farnsworth, Joel Peralta, Adam Russell, and Andy Sonnanstine. There was a healthy competition for the remaining three spots which were eventually won by Juan Cruz, Cesar Ramos, and Jake McGee.

The big question surrounding the Rays as they departed spring training was if Joe Maddon would name a closer or if he were prepared to go the closer by committee route. Neither Andrew Friedman nor Joe Maddon tiped their hand:

"It's much more about having enough high-leverage guys that can get big outs late in the game," executive vice president Andrew Friedman said, "whether that's the seventh inning or the eighth inning or the ninth inning." - Tampa Bay Times

"I'm not going to declare one," manager Joe Maddon said, "because I think if you are not absolutely certain, then you shouldn't do that because you're only setting yourself up for problems later on." - Tampa Bay Times

After the first 6 games and 8 innings of play, Joe Maddon and the Rays were still looking for an opportunity to a) take a lead in a game and b) get the final three outs for a victory. Thanks to two errors by the Chicago White Sox and a key 3-run home run by Dan Johnson the Rays streak of not having a lead in a game ended at 62 innings and Joe Maddon had an opportunity to go to his bullpen for the final three outs. He turned to Kyle Farnsworth who retired the side in order and recorded his first save since June 13, 2008.

True to his word, Maddon never named Farnsworth his closer (he did call him a reliever extraordinaire) but he turned to him to finish 51 games during the season. The next closest relief pitcher in games finished was Joel Peralta with 18. Farnsworth did his part to maintain Maddon's trust by delivering his best season of his career. He posted a 5-1 record with an ERA of 2.18/FIP of 3.16 and was credited with 25 saves. His BB/9 rate of 1.87 was a career low and his K/BB ratio of 4.25 was a career high.

With Farnsworth assuming the 9th inning role Joe Maddon was free to mix and match the high/medium leverage situations as he saw fit. The following is a breakdown of high/med leverage (based on Fangraphs) innings pitched : 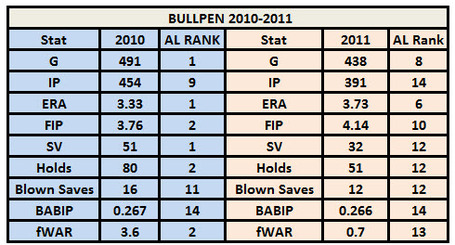 The pitching staffs in 2010 and 2011 had approximately the same number of games when leading after 6,7, and 8 innings and had nearly the same success.

Unless the Rays starting staff continues to go deep into games, the 2012 Rays will most likely have to rely more heavily on their bullpen. Fortunately for Joe Maddon, unlike last spring, he will not have to be spend his time in Port Charlotte filling the role as social coordinator. Kyle Farnsworth, Joel Peralta, J.P. Howell, Brandon Gomes, Cesar Ramos, and Jake McGee are all returning. He will have a few new faces to introduce as over the winter the Rays traded for Burke Badenhop and Josh Lueke and signed Fernando Rodney as a free agent. There will be more on each of these relievers as spring training progresses. For now, a quick look at who is in camp competing for the 7 spots.

Nine pitchers will battle for the 7 bullpen spots. As of today, the bullpen looks to have 5 spots secured. Kyle Farnsworth, Joel Peralta, Jake McGee, J.P. Howell, and Fernando Rodney.

The remaining spots will be decided between Brandon Gomes, Cesar Ramos, Josh Lueke, and Burke Badenhop.

The biggest concern with the construction of the 2012 Rays bullpen are the two words that were most often associated with Kyle Farnsworth at the end of the 2011 season--Tender Elbow. The bullpen competition certainly takes on a different complexion if that elbow flares up and the Rays are faced without having their reliever extraordinaire at the back end of the bullpen. The Rays have proven that they can fill that role in the past but the question will shift to whether or not they have the depth to maintain the 80-82 game frequency of having a lead after 8 innings if they bump everyone up one notch.