Share All sharing options for: Thoughts on James Shields, Part 1

In this two part series, I will look at various aspects of James Shield's 2011 performance and how if could effect his 2012 season. In the first part, historical comparisons to Shield's workload increase will be examined. In the second part, I will attempt to see if James Shield's success in 2011 was sustainable.

Last year, James Shields pitched 249.1 innings, faced 975 batters, threw 3576 pitches, and started 33 games. Back to 1925, that type of line wasn't so impressive. However, the game of baseball has evolved, and by today's standards, James Shields was a pitching machine last year -- a model of durability.

While Shields is praised for his endurance, there are some concerns that he could experience regression next year due to the heavy increase in his innings and pitch totals. Is there a need to be worried? A quick historical look tells us not to panic.

From 1996-2011, I examined all starters who pitched at least 235 innings and who saw a 12% or more increase in their inning totals. Those numbers are similar to the numbers Shields experienced in 2011. Seventeen seasons fit these guidelines. Their averages for IP and totals for FIP are in the graphs below.

"Top Year" is the year in which the starter threw at least 235 innings and had a 12% or more increase from their previous high in innings pitched. "Year After" designates the year that directly followed the "Top Year." 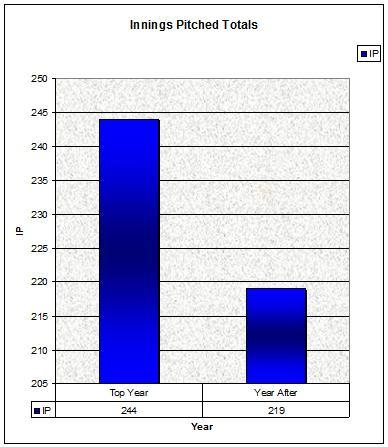 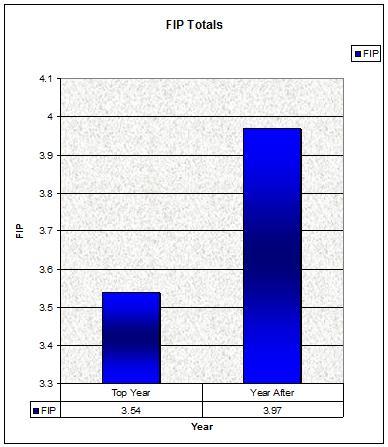 As can be seen, the results do show some reason to be concerned. Starters with comparable seasons to Shields' 2011 (in terms of an increase in innings) did show quite a bit of regression in FIP. However, these numbers are a bit slanted because a few mediocre pitchers (such as Carlos Perez) had only one fantastic year, making them eligible for this study. Shields, on the other hand, has had sustained success over his career.

Another reason to not be overly concerned is because Shields only threw 7% more pitches in 2011 than in 2012. In fact, Shields didn't even lead the staff in pitches thrown. That honor belongs to David Price, who threw 3% more pitches than Shields. The charts below depict the numbers in terms of pitches thrown instead of innings pitched.

The "Top Year" were all performances from 2002-2010 in which the pitcher threw as many or more pitches than Shields (3576 pitches) for the first time in their career. 29 seasons fit this bill, including ones from Halladay, Sabathia, Arroyo, Livan Hernandez, and others. 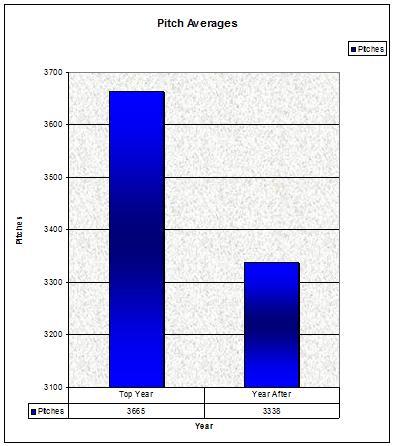 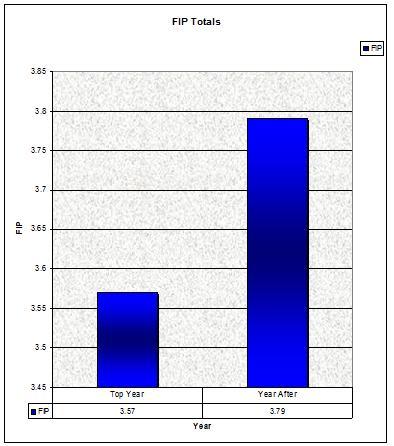 As can be seen, the decrease in workload after the "Top Year" is very similar to that of the innings thrown. However, Shields is at the absolute bottom of this spectrum (all of the pitchers needed to have at least 3576 pitches, Shield's highest amount in his career), therefore having the smallest workload which would presumably lower the wear and tear on his arm compared to the other pitchers. The FIP numbers also offer more hope for Shields, as pitcher's FIP went up by only 6% compared to the 12% number in terms of innings pitched.

Even if these raw numbers are averaged (so the average of the innings and the pitch count numbers) and applied to Shields, he should be in line for 226.1 innings and a 3.73 FIP, which is an excellent and respectable total.

From all of this, we can take away a few things. First of all, there is a reason to be mildly concerned. A majority of the starters became worse after pitching higher inning and pitch totals. On the other hand, many of the starters who have had years of sustained success, such as Sabathia, Verlander, Halladay, Carpenter, and Hernandez, did not experience much regression, if any at all. So while we should expect some regression due to 2011's workload, the effect should not be drastic.

In conclusion, if history is to teach us anything, Shield's 2012 season should be another successful year with his heavy workload causing only minimal regression.