Small sample sizes, such as 161 PAs, are essentially meaningless in evaluating the true talent level of a baseball player. They terrorize the minds of baseball fans, convincing these fans that a definitive conclusion can be drawn from them. Spring Training is a fine example, as is a prospect's September debut numbers. Attempts are made to disregard small sample sizes, but often even the most objective and analytic baseball fans still fall into the trap.

However, Matt Joyce has displayed a weak spot in the major leagues, his inability to hit left-handed pitching. Already, Joyce has been deemed a platoon player by many, even the most astute analysts. All of this craziness is based on a measly 161 plate appearances.

One hundred sixty-one plate appearances is not a large amount, and it certainly isn't a large enough sample size to conclusively deem Joyce a platoon player . So why not expand the sample size some to get a more accurate view of Joyce's true talent level versus lefties by looking at his minor league numbers?*

If his diminutive sample size in the major leagues is ignored, Matt Joyce appears to be a solid hitter against lefties. While he didn't hit them as impressively as righties, Joyce was not a prospect with notable platoon issues. In fact, there wasn't really any concern about Joyce's bat against LHP as a prospect. Instead, most were concerned with his plate discipline. Here is a Baseball America report from January, 2008.

Weaknesses: Like many of the Tigers' top position prospects, Joyce needs to cut down his strikeouts. He chases low changeups from righthanders. He doesn't use his average speed as well on the bases as he does in the outfield.

Left-handed pitchers never were an issue for Joyce until a poor 161 PAs. Once again, it was only 161 PAs. Conclusions about a player should not be definitively drawn from that small of a sample size. In fact, history tells us the same thing.

A historical glance can offer some perspective on Joyce's MLB struggles versus lefties and see if similar players encountered these struggles. It can then be observed whether or not these comparable players succeeded against lefties in the rest of their career.

I decided to look at left handed hitters who hit right-handed pitchers as well as Joyce (133 wRC+ or better). To eliminate any outlier seasons, the hitter had to post a wRC+ of 133 or better twice during the time period. After narrowing down the results using these parameters, the stats of these players versus left handed pitchers in a very small sample size (around Joyce's 161 and directly after reaching the majors) were found. The chart below displays them.

For this study, players labeled as "good" were those who posted solid to good offensive statistics versus left handed pitchers immediately upon arrival at the MLB level (during their first 160 or so PAs).

Does this mean that Joyce is not in good company, and that he won't have future success against left-handed pitchers? No. It is important to remember than many of these players were excellent hitters. The following players are a few of the more prominent members of the "good" section: Barry Bonds, Adrian Gonzalez, Chase Utley, Brian McCann, Bobby Abreu, Jason Giambi, Jim Thome, Joey Votto, Ken Griffey Jr., and Todd Helton, among others. To even be included with such names puts Joyce in elite company.

The graph really demonstrates the strength of the group more than it reveals anything about Joyce's struggles against lefties. After eliminating these players from the study, the group has been narrowed down to those who fit the following categories....

It seems like the perfect Joyce comparisons, right? Now it can be noted whether or not these players performed better versus LHP during the rest of their careers in comparison to their initial small sample sizes. 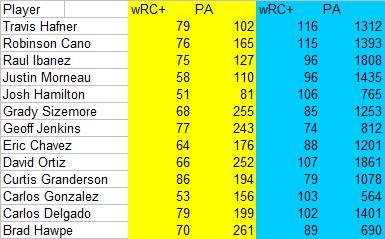 Only two out of the 13 players did not improve significantly versus left-handed pitchers, and one of these players (Granderson) looks like he might have turned the corner, posting a career-best 151 wRC+ versus lefties in 2011. Based on these results, I am confident that Joyce can post solid numbers (85-100 wRC+) against southpaws.

Joyce's struggles versus left handed pitching appear to be the result of small sample size more than an indication of his true talent. Joyce has displayed an uncanny ability to hit right handed pitchers. Historically, players with similar ability have managed to fare solidly, if not better, versus left handed pitchers during their careers, even if they initially struggled. While Joyce may not get too much playing time against lefties in 2012, it seems very reasonable to expect him to hit lefties solidly from this point forward. It is unfortunate that Joyce has become the victim of small sample sizes. Had the 161 PAs been seen as insignificant to begin with, the assumption that Joyce is a platoon player would never have occurred.