Share All sharing options for: The Rays Tank: Fortune Favors the Bald Edition

If aerodynamicness were a thing by which teams were measured, the Rays would be head and shoulders above the competition after yesterday's events. As Steve noted in Wednesday's Rays Tank, members of the organization took part in a fundraiser for the Pediatric Cancer Foundation by shaving their heads. In all, roughly 70 were brave enough to join in, including Joe Maddon, Stu Sternberg and Andrew Friedman. It seems like the guys had fun with it:

There were plenty of jokes, from third-base coach Tom Foley requesting some hair gel, to pitcher David Price asking Friedman if without hair he now would be under 5 feet tall, to James Shields suggesting he now looked more 23 than 30, to Sternberg wondering is they'd score more runs since the players would be faster, but also the serious nature of the effort.

Seeing Maddon without his trademark locks takes some getting used to, but as a balding gentleman myself, I dig it. 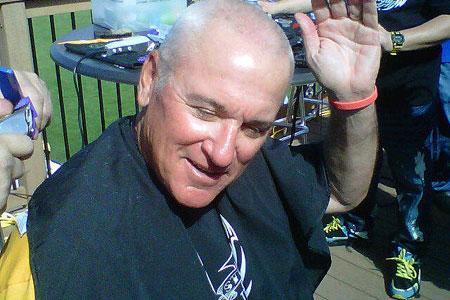 You can still donate by clicking here.

In on the field news, Wade Davis had another rough outing, giving up eight hits and four runs in four innings of work.. The bright side is he did not allow any walks and struck out three. He doesn't seem worried, as you can see in this video. He was pleased with how aggressive he was in the strike zone and how much weak contact he induced. I wasn't able to see the game today, can anyone out there confirm his sentiments?