Jeff Niemann comes into the 2012 season actually having to fight to hold onto his spot in the starting rotation as the Rays have more starting pitching depth than at any other time in history of the organization. The former fourth overall draft pick has shown many things in his first three seasons as a starting pitching, but he has not shown much durability. What can be expected from NIemann in 2012?

When you look at Niemann, the term workhorse comes to mind. He is a walking human eclipse at 6'9" and 260 pounds but his size belies his production as he has never thrown more than 180 innings in a season and has seen his innings total decline each of the past three seasons. His player card at Baseball Prospectus shows four different stints on the disabled list during his professional career:

That does not include his issues at Rice University where he battled a groin strain and needed minor arthroscopic surgery on his elbow or the fact he missed the entire first half of the 2006 season recovering from an off-season surgery to shave the joint between his collarbone and shoulder.
The health risks have been not been the only consistent issue with Niemann as he has also been very stable from a skills perspective as well.

The one change in his skillset is a rising groundball rate that gained a lot of steam in the second half of this past season. In the first half of the season, Niemann toed the rubber from the far left end of the rubber as illustrated in the image below from a game on May 4th against Toronto: 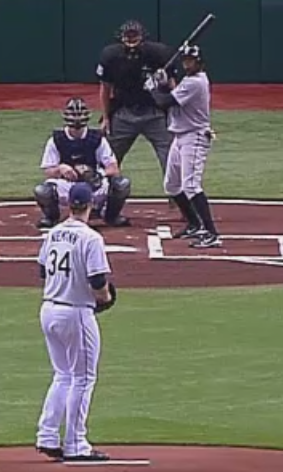 He maintained that position on the mound until a start on July 2nd against St. Louis when he changed his starting position to a more right of center spot as shown in the image below: 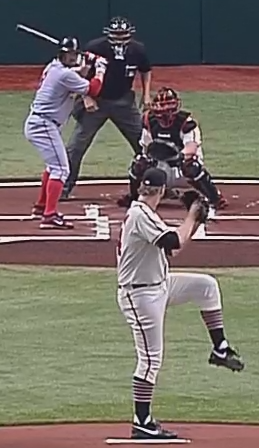 Brooksbaseball.net notes the change as Niemann appeared to be someone that toed the extreme first base side of the rubber for most of his career until mid-2011. 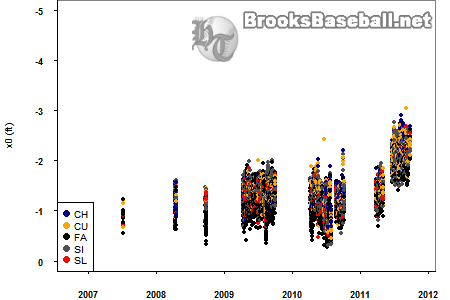 The change on the mound led to a noticeable change in his pitch locations, most notably to left-handed batters. 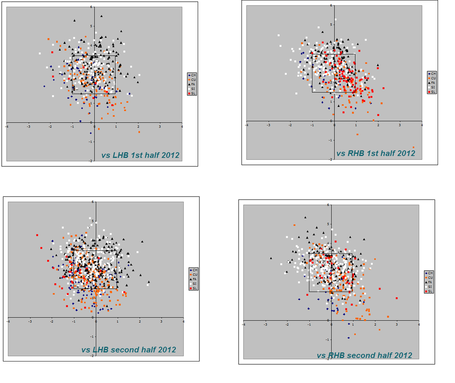 His pitch outcomes by half show how the change in his pitching process affected his results in the second half of the season. In the season's first half, Niemann had a slash line of .291/.309/.468 against lefties in a small sample size of 79 at bats including a 14 percent (5.4 K/9) strikeout rate. In the season's second half, Niemann's slash line against lefties dropped to .238/.292/.419 while his strikeout rate spiked to 24 percent (7.7 K/9). His batted ball splits were noticeably different as well:

The increase in groundballs coincides with Niemann's increased usage of his two-seam fastball in the second half to both righties and lefties as well as more usage of his curveball. The table below shows the results by half against both types of batters: 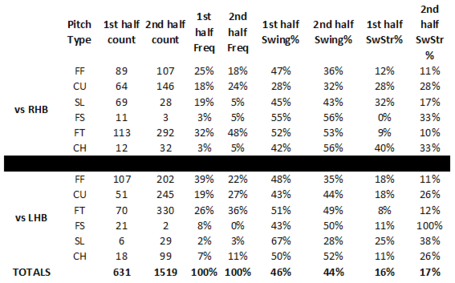 In yesterday's discussion in the Rays Tank, Sandy Kazmir was kind enough to share his graphical work which shows Niemann's running record from last season. The primary (left) axis shows pitch frequencies represented y the solid lines while the secondary (right) axis shows run values represented by the dashed lines. The dashed lines are best when they remain below the solid black line which is the league average run value. 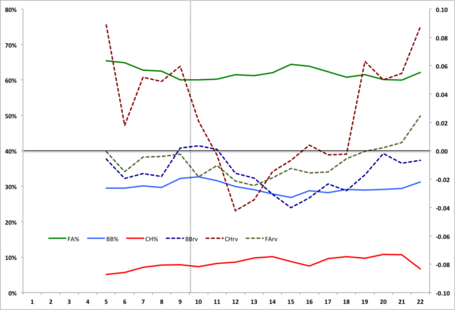 Kazmir's graph shows how excellent Niemann's curveball was nearly all season while his fastball (a combination of 2 and 4-seam) was slightly less and his change-up was a mostly unusable pitch for most of the season in terms of effectiveness. While the second half of the season was encouraging, Niemann did struggle with the longball despite the spike in groundballs as he had a second half home run rate of 1.2 per nine innings as 15 percent of his flyballs became souvenirs.

The change in process and results were pleasantly surprising, this is not the first time that Niemann has flashed periods of dominance followed by periods of disaster. The competition for the final spot in the rotation is now down to he and Wade Davis since Alex Cobb has already been shipped out to minor league camp. Niemann and Davis take a back seat to the potential of the other four pitchers in the rotation, but either would arguably be one of the best fifth starters in all of baseball. Given the strength of the infield defense and Niemann's transformation into a groundball pitcher, he would seem like a better fit for the role and that decision should come sometime in the next 10 to 14 days.