Earlier today on Twitter, Sky Kalkman (@Sky_Kalkman) posted some information on a bullpens and how their values compare by role within them. Using crude estimates of ERA's and leverage index totals for a seven-man bullpen where each member pitches at least 75 innings, he found that closers carry a significant amount of the value within a bullpen. 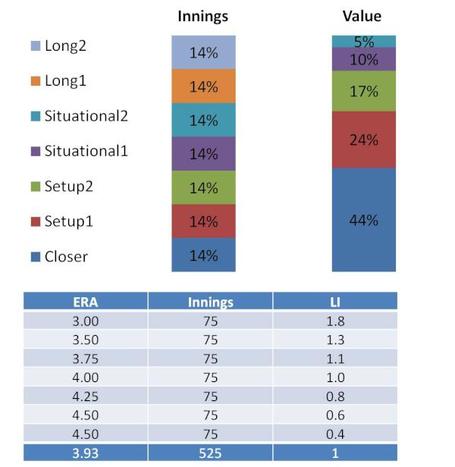 Using the handy worksheet Kalkman provided online, we are able to see how the Rays bullpen worked out in 2011:

The green cells represent the variables in the equations and were the final totals from last season. Kyle Farnsworth and Joel Peralta certainly did a fair share of the heavy lifting in the bullpen last season as they were 84 percent of the group's value last season while throwing 39 percent of the innings represented on the chart above. If you compare the first image to the second image, you can see how much better Farnsworth and Peralta were at their roles compares the crude averages used in Kalkman's table.

Four of the seven names on the second table are either already gone or are unlikely to make the opening day roster but here is a peak at a projected opening day bullpen using the 2012 Steamer projections and the leverage index totals Kalkman used in his graphic:

If anything, the 2012 bullpen does not project to be as top heavy as it ended up being last season but also projects to be ten less runs above replacement as a group.