Share All sharing options for: Josh Lueke's Case For A Bullpen Spot

One and a half years removed from losing nearly their entire bullpen to free agency, the Rays have a ridiculous surplus of relievers. There are a number of pitchers that could easily slot into their 2012 bullpen, and that's without even considering that Wade Davis or Jeff Niemann may need to move to the 'pen to start the year.

There are nine names on that last, and assuming Davis/Niemann start the year out in the bullpen, the Rays will need to select six names from this list at the end of camp. You could probably scratch off Cesar Ramos easily enough, but even then, which other two players do you leave off? That's no easy decision.

For the last couple weeks, my assumption has been that Josh Lueke will end up as one of the players sent down to Triple-A to start the season. Lueke will be paid the league minimum this season and has two more options left, while Badenhop, Howell, and Rodney are guaranteed over a million dollars each and would be difficult to demote. Meanwhile, Jake McGee and Brandon Gomes could both be demoted, but they are also two of the best pitchers in the mix for a spot. One of them may get demoted, but I don't see that happening to both of them.

So Lueke may be out of luck. No matter how well he performs this month, he's likely going to head to Triple-A due to the guaranteed money going to other pitchers. His 6.06 ERA from last season seemingly makes this an easy decision, but not so fast -- Lueke may be one of the best relievers the Rays have.

Lueke initially caught my eye when I was looking at the 2012 Steamer projections for the Rays. The Steamer projections are relatively new -- they were invented in 2010 -- and they consistently rate as one of the best projection systems for pitchers, likely because they are the only model that includes fastball speed in their projections. And according to the Steamer projections, Josh Lueke projects to have the fifth-best ERA (3.79) and third-best FIP (3.84) in the Rays' bullpen.

How is this possible? Underneath his ERA, Lueke looked like a heck of a pitcher last season. He struck out 20% of the hitters he faced while only walking 9%, and he generated swings and misses on 10.3% of his pitches -- higher than anyone in the Rays' bullpen last season outside Joel Peralta (10.8%). He also kept the ball in the yard (6% HR/FB rate), while suffering on balls in play (.327 BABIP) and on stranding baserunners (56.6% LOB%). With some regression this year in those categories, he could turn into quite the stud.

When it comes to relief pitchers, though, we should be hesitant to draw too many conclusions from projection systems or raw stats; relievers only throw 40-60 innings a season, and their results bounce around and are difficult to predict. Lueke has only thrown 32 innings in the majors, so while the stats make Lueke look attractive, we need to see if some scouting data backs this up.

What should we trust more: Lueke's ERA or his FIP? Does his pitch repertoire look impressive, or is he nothing more than a fringe reliever?

A couple weeks ago, I compiled a list of the "nastiest" pitches on the Rays' pitching staff based on how often a pitch generates a swinging strike (Whiffs/Swing). I concluded that Fernando Rodney's change-up (46.1%) and Kyle Farnsworth's slider (38.8%) were the best pitches on the Rays, but when compiling this list, I made the mistake of leaving off Josh Lueke.

If I'd included Lueke, he would have had two of the top four pitches on the Rays' staff: his curveball (43.1%) and his splitter (39.5%). He is the only pitcher currently on the Rays that had two pitches that generated whiffs 35% of the time last season. When looked at through this lens, his pitch repertoire is among the best in the Rays' bullpen:

I don't believe this is a small sample size fluke, either. Lueke's fastball averaged 94.4 MPH last season, making him quite the power arm, and both his out-pitches averaged around 80-82 MPH. That's a huge drop-off, making it difficult for hitters to sit on one pitch and hope to square up on it. If Lueke throws you a fastball when you're sitting on a splitter...well, good luck catching up with that.

And then there's the matter of the movement to Lueke's curveball and splitter. The pitches are so similar, it may be difficult for batters to tell one from the other until it's too late: 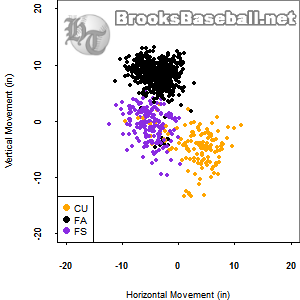 Like mentioned above, both the splitter and changeup travel at around the same speed, and their movements are quite similar. Both pitches drop around the same amount, but his curveball has more horizontal movement. I'm no expert on what types of pitch movements complement each other well, but this looks like a good combination to me -- two off-speed pitches that have great velocity separation from his fastball, may be difficult to tell apart out of his hand, and still have notably different movements.

Lueke may be the odd man out this spring, but even if so, the Rays have him under team control for five full seasons. With pitches like this, he's surely going to be a valuable asset out of the bullpen -- the only question is when he'll get a shot.

Hat tip to Brooks Baseball for the Pitch F/x data in this post.