A Detailed Look At Prospect Values

Share All sharing options for: A Detailed Look At Prospect Values

A few days ago, Rob Neyer hosted the highly anticipated Sloan Sports Analytics Conference in Boston. Many highly analytical and meaningful baseball conversations surely occurred. But the question that carried the most weight, in my opinion, was Neyer's question concerning the next frontier of baseball analysis. The baseball panel, including Scott Boras, Mark Shapiro, and Bill James, offered interesting and stimulating answers. Most were complex, ranging from sports psychology to medical matters. Most assuredly, the were fine, astute answers, worthy of recognition and discussion. But the most noteworthy answer came from the Ray's very own Rocco Baldelli, a former player. His question was simple: why do some players hit while others don't?

In the evaluation of prospects, scouting and performance generally tend to dictate a player's ranking on a Top 100 list, such as Baseball America's. By reviewing the results of prior lists, a better understanding of certain players' values can be gained. For example, certain positions have undeniably fared better than others, despite similar rankings. It is later revealed in this post that a 1B ranked in the Top 40 has similar value to a LHP ranked in the Top 5. Different rankings serve as cutoff points between a major discrepancy in value. Another example is that prospects labeled as "older" tend to perform worse than prospects labeled as "younger". Hopefully this post can offer some insight into these subjects, helping to clarify the general understanding of prospects, and how different aspects have made specific players more valuable than others.

In the following three sections (ARL, positions, and ranking), the same method is used. The effects that different factors have on prospects will be examined before being aplied in the final section.

The data includes all prospects that appeared in a Baseball America Top 100 from 1990-2002. If a player appeared multiple times, each year is recorded. For example, both the 2001 and 2002 lists receive credit for Josh Hamilton.

In order to quantify the value a prospect produces for his respective team, the value a player gathers (using fangraph's WAR) is measured for his first full 6 years of team control and then averaged annually.

By looking at the average WAR over the player's years of control, the success rates can be observed. The following chart is the guideline for the success rates (it is the same as Scott McKinney's***, so credit goes to him): 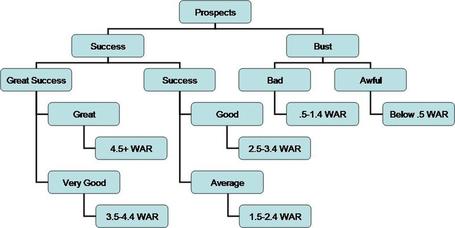 Throughout this post, I will also be grouping prospects by their ages. Below is the guide for the age categories (Old, Medium/Average, and Young).

What is age relative to league (ARL)? Age relative to league is a players age in comparison to the rest of the league. However, since this comparison here is only among top prospects (those in Baseball America's top 100 from 1990-2002), the definition is a prospect's age in comparison to other top prospects at his level. For example, a 20 year old in AAA is "young", while a 22 year old in A is "old". While Baseball America already factors this (ARL) into their rankings and judgement of players, the amount of importance and attention it receives may not be accurately measured. For example, Tim Beckham is given "extra" value because he is young for his level. However, the amount of additional value given to him may not be accurate.

Here is the data on ARL: 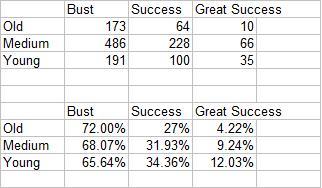 Below is the average WAR totals instead of the success rates. 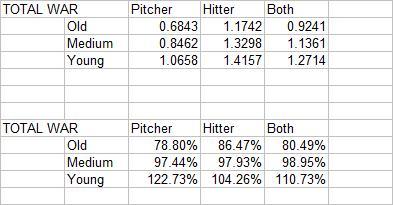 However, I'm not willing to definitively conclude that ARL is more important for pitchers. The numbers very well could be the result of variance. In my opinion, the column on the far right ("Both") is the most important piece of information since it has the largest sample size.

Please also note that not all of the information gathered regarding ARL is listed, in order to shorten the post. Below are a few interesting notes....

When creating a prospect list, a player's position is factored into the equation. After all, different positions have different degrees of importance defensively. If two players are equivalent hitters, then the player with the better defense on the better end of the defensive spectrum should be ranked higher. If not for defense, a player like Hak-Ju Lee would not be ranked as high as he currently is.

However, do certain positions have a better track record of developing into valuable MLB assets?

The results are a bit surprising. First base leads this section, even though it accumulates little defensive value. On the other hand, first base seems to be a position where stars, such as Pujols, are developed.

Below are the success rates for the individual positions. 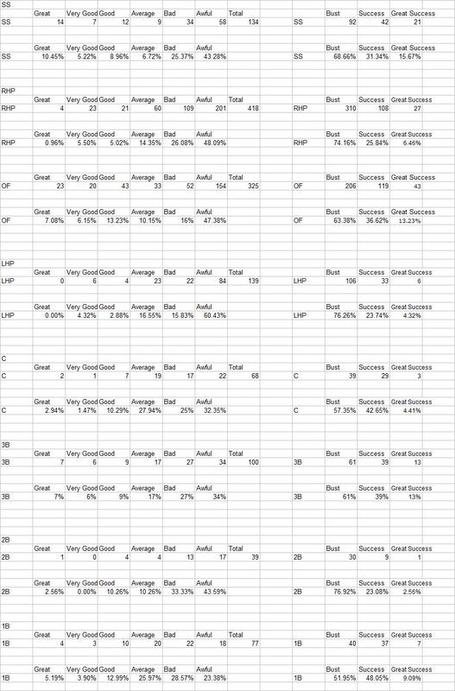 The numbers are a bit difficult to read, but their point is less for accuracy so much as to convey an overall idea: prospects at different positions have drastically different success rates and value.

Ranking is the position in which the player was rated in the Top 100 list. For example, Matt Moore was rated the #2 prospect in Baseball America's most recent list.

The following chart shows the average WAR values per each individual ranking. The numbers vary notably from each position. 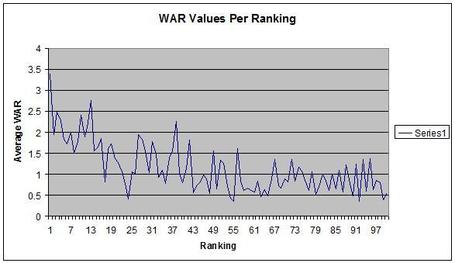 Using individual rankings does not paint an accurate picture for finding values. For example, there is a steep drop from ranking #56 to ranking #57, which is more of a testimony of previous success than an accurate view for finding future values. 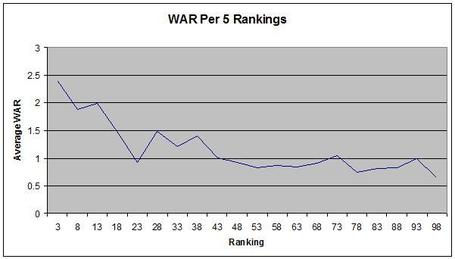 After collecting and examining the data, it can now finally be put to use. The goal is to find dollar values for each specific type of prospect based on ranking, ARL, and position.

The first step is to divide the prospects into the ranges based on their ranking and to give them an average WAR value that corresponds with their ranking. Once that is completed, the prospects are given weights to account for ARL and their position. The weights are reduced to help account for both variance and ranking. Variance may be partially to blame for the struggle of LHPs. Lower rankings may also have played its part. By using reduced weights, these variables are minimized.

After applying the weights, the net WAR values are then transformed into dollar figures. Here is the formula: WAR*5*6 - 1.2*WAR*5 - 1.2. Explanation: The average WAR is multiplied by five to convert to dollars and then six to find the total WAR accumulated by the player over his first full six years. Then, the player's costs (120% of his performance in dollars using the 20%, 40%, 60% arbitration figures and 1.2 million for pre-arbitration) are subtracted. With this formula, the player's net dollar value can be attained.

Below are the final results. Please note the figures are in the millions. 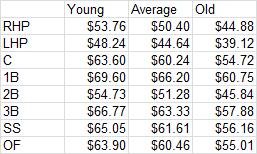 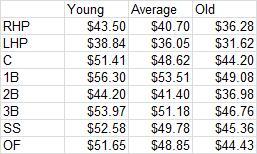 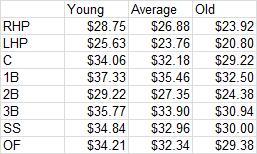 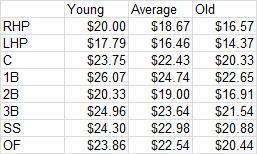 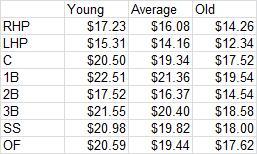 Please remember that there are limitations to numbers like these. Sure, they make the odds of Matt Moore becoming a superstar seem dim. However, the numbers don't judge how effective Matt Moore will be; moreover, they show his worth based on previous results. The numbers have no real effect on Matt Moore. They are a glance at the historical values of similar prospects.

These numbers are useful for a quick overview of prospect values and for examining/creating trades. Using them for anything beyond that is not using the numbers in the way they were intended to be used. Every single category had and can once again have a success story. It is key to remember that these figures tell how much prospects are worth, not who they will become. It will never be found out who prospects will become, even if strides are made in finding out why some guys hit and others don't. The problem is simple. The answer just isn't as simple as it seems.

*** I do not claim to be the first person to assign dollar values to prospects. Victor Wang, all the way back in 2007, gathered data on prospects and assigned dollar values to them. A tad over a year ago, Scott McKinney over at Royals Review looked at the success and failure rates of MLB prospects. I do not claim that the general idea of this post is the first of its kind, nor will I claim that the inspiration of this post was an original idea. Credit for the general idea of prospect values should be assigned to those who studied the idea far before me, and from whom I draw inspiriation.