Share All sharing options for: This Week in Sun Sports: Day Games Edition

Welcome back to This Week in Sun Sports, kids. As always, we'll be looking at the oddities of the Rays broadcasts from this past week. Anything from the announcing, to a crazy video segment, to the fans in the stands. If it's on Sun Sports, we see it. Because--like Gordon Sumner and The Police--we're always watching.

This week covers Tuesday, April 10th - Sunday, April 15th. If you missed last week's, you can find it here.

On the baseball side of things, this week wasn't the brightest of spots in what we hope will be a magical Rays season. The good thing about This Week in Sun Sports--if there is such a thing--is that we don't focus on the actual gameplay, so everyone's a winner!

We begin in the bottom of the fourth inning when we were given a glimpse of two men that you might see at your end. 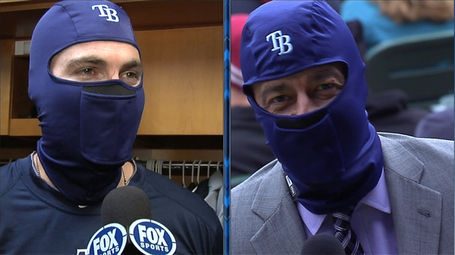 That's Luke Scott on the left and the Todd Kalas on the right. This Ninja Gaiden special has opposite effects on these two gentlemen. This all blue look for Scott has him looking like Sub Zero from Mortal Kombat, which, believe it or not, is less intimidating than his typical Wolverine-chops (h/t Collette). 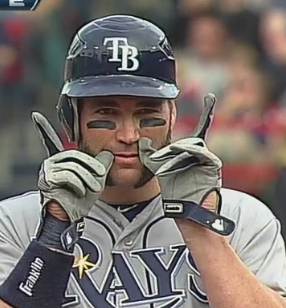 On the other hand, Kalas looks downright scary. Like nude-Kathy-Bates scary. At first I thought it was all about the suit/mask combo, but on second glance, I think it's the fact that Kalas is staring right at the camera in his picture. All we see are his eyes, and they pierce into the cavernous expanse of our collective soul album collection.

I think BA agrees with me:

BA: "The first thing I'm thinking with the guy on the right is: Home Invasion."

Also, is that a pouch in the front? Looks like a protective cup should slot right in there. Scott was riding the pine that day with a tight hammy. You know what they say, "If you can't be an athlete, be an athletic supporter."

A weather forecast, a sabermetric first, and some "pew pew pew" after the jump.

For the purposes of a GIF Free Front Page (GFFP) we're going to move back in time a few innings to the top of the second inning where Todd Kalas is giving the lead in to a clip of Matt Moore talking about Jose Molina's catching prowess:

Look at Todd Kalas just up and leave before the camera cuts away. This is clearly the fault of the editing guy. Really, guy, you think Todd Kalas has all day for this amateur bull-ish? The man is a professional. He has places to be, murder-masks to wear, and young Fox Sports Florida girls to mack on. I do like the 'I Dream of Jeannie' head nod that magically removes the twitter graphic. It's not a Bewitched-esque nose-wiggle, but if he did that then I'd have to imagine him banging Dick Sargent (or York) and that would be scarier than the death-mask.

As summer grows near, and the weather turns from chili today to hot tamale, your friends at Sun Sports have you covered. 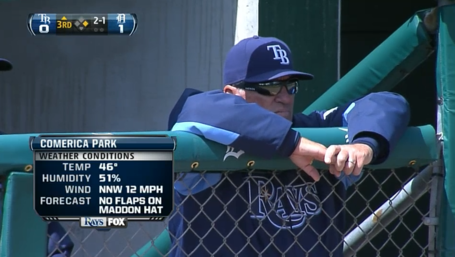 Always nice to play on a 'no flaps' day. It's a nifty little descriptor. The only problem is that when I think about 'Maddon Flaps,' I picture them hanging off the back of a truck: 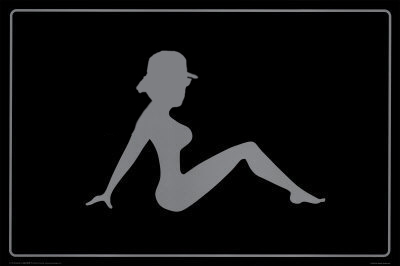 I'd rock a pair of these on my dually. They'd go great with the balls hanging from my trailer hitch.

Hat tip to Bradley Woodrum, who spotted this sabermetric gem in the fifth inning: 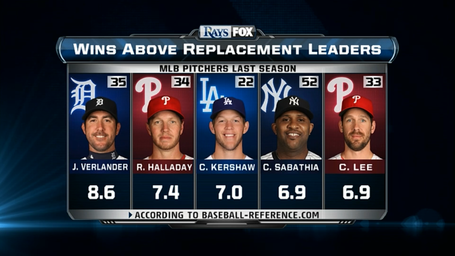 It appears that this might just be the first time a WAR leaderboard has appeared during a Sun Sports broadcast, and just maybe, any game ever. I'll leave the investigation of the world record to the experts, but I'm mostly concerned with the fact that this list is backwards. With a WAR of 6.9, both CC Sabathia and Cliff Lee are the clear winners here. And as much as I hate the Corpulent Carsten Charles Sabathia, he clearly has the edge because he is 420% larger than Mr. Lee.

In the bottom of the ninth, we got a glimpse behind the curtain when Elliot Johnson took the field after pinch-hitting for Matt Joyce: (h/t Collette) 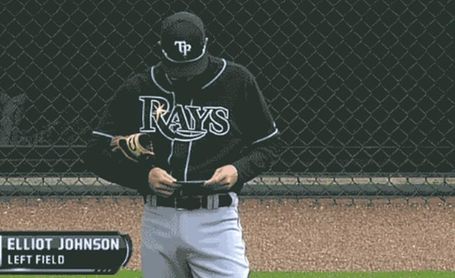 Elliot seems to be getting in a last minute cram-session on the positioning against the Tigers' sluggers. Either that, or he's so stunned that pretty girl wearing a leopard-print mini gave him her number that he's not focusing on the game at hand. Her name is Alabama. She said she loves Elvis and wants to go see Kung-Fu movies sometime. What a catch. A True Romance.

Either way, this is a pretty cool thing that Rays fans get to glimpse this season. In football, we expect the quarterback and sometimes the receivers to have tiny playbooks on the field, but we never see it in baseball. It feels more like a cheat sheet than a playbook. Quick, hide it before Joe West sees it and makes up some rule to throw you out of the game.

I know we don't generally get into on-the-field chicanery, but I don't think we've seen this clip enough. In the bottom of the sixth:

I know it's painful to think about how Shoppach went on a tear this past weekend, but this should transcend the fact that he now plays for the Sox. Not much else to say on this, except I love the way his helmet goes flying off at the end. There are better quality (and larger file size) screen grabs across the interwebs if you so desire.

In other news, don't you love how fickle Red Sox fans are? How they go from "tongue kiss a stranger" happy to "hacksaw a hobo" rage-sad when they realize that 210 foot pop-up just isn't going to make it "ovah tha monstah?" It's what makes them the best fans in all of sport.

Well it's not just for pop-outs anymore! In the seventh inning, Luke Scott(!) snared a piece of trash by home plate: 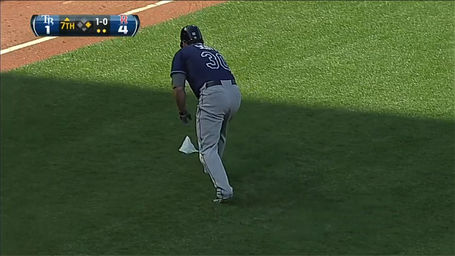 Those Pesky Red Sox fans, who had been booing Scott because of his on-the-nose comments about Fenway Park being a dump--albeit a nostalgic one--erupt in a cheer when he helps pick up the trash that proves his point. That would be like a guy on the Maury Povich show saying the baby isn't his and he won't have anything to do with it, then erupting in a joyous cheer when Maury reveals that He. Is. The Father. Basically, the opposite of this.

Apparently Luke Scott and Evan Longoria are getting along famously. We got a sneak-peek at their super-cool, BFF handshake after Scott's 3-Run bomb in the first inning. (h/t everyone in the GDT for spotting and Collette for the GIF)

If you can watch this clip and not say "pew pew pew" as the pair wiggle their hands at one another, you are a stronger person than I. I love how Burke Badenhop looks at them like, "I thought pitchers were supposed to be the weird ones."

In the bottom of the third inning:

Ever since that Saved by the Bell episode where the gang learns about subliminal messages, I've always felt like people were trying to tell me something through the TV. When I look at this image, I feel as though that's the case, but I just can't put my finger on what the fine people at Sun Sports are trying to tell me about Dustin Pedroia. 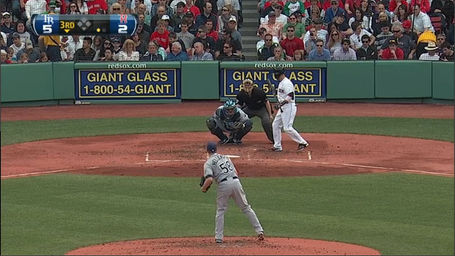 There's a message here, I just know it. I feel like it's staring me in the face. If you can figure it out, please let me know.

We finish up the week having gone full circle. Remember that we here at This Week in Sun Sports are always watching. Well, thanks to commenter 'BornAKardiacKid' we've learned that Dewayne Staats is as well: 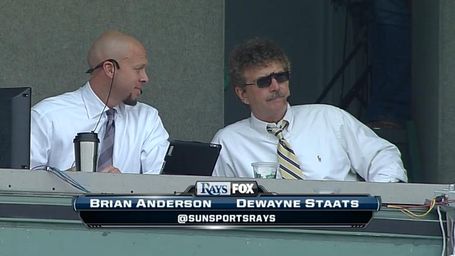 Anyhoo, that's it for This Week in Sun Sports! Special thanks to all of you who helped out and emailed and hashtagged stuff this week. It was a huge help with all the day games. Also, r/a to the point of a c/j for Bradley Woodrum for keeping that eagle eye all week and pointing out almost everything on those weekday games.

If you see something during the game that would fit "This Week in Sun Sports," please help us out and tag it (#TWSS) in the GDT or email a description or screencap (including inning and outs) to ThisWeekInSS@gmail.com. See you next week!