Ed note: With this many rec's, this gets bumped to the front page. Good job!

After Sunday's loss to the Red Sox, there was some debate about whether or not Matt Moore was tipping his pitches. Jim Hickey is sure that it wasn't a problem, and it was only a matter of misplaced fastballs. You may be familiar with Kevin's commentary on this issue from last July. In short, on a number of fastballs, Moore pumps his hand into his glove right before delivering the pitch. He does not do this on every fastball, and he never does it with an offspeed pitch. Check out some of the GIFs from the start that Kevin made below the jump.

That's a particularly egregious example of the pump followed by a fastball. Did Ross know it was coming, or was it just a really, really bad pitch to a hitter that only hits fastballs?

Here's another pump. If Pedroia knew what was coming, I think he would've been able to time his swing better because Moore missed his spot pretty badly.

Here's a fastball with no pump.

If a loser sitting on his couch drinking an Arizona iced tea (like me) can spot this, I'm sure major leaguers see it too. Moore says he's never been told that pitch tipping is a problem with him, but this isn't the first time people have seen this pattern. Because he doesn't do it on every fastball, there are a couple things to take from this. One, since it's not totally consistent, it's harder for batters to just sit on the fastball waiting to see the pump. Two, it shows that he doesn't have to pump before throwing his fastball, so it's very possible to get rid of the habit entirely.

My opinion is that while he may tip some of his fastballs by doing this, it's not the reason he struggled on Sunday. If Red Sox hitters were waiting to see the pump to hit fastballs, they let a number of them in hittable locations to go by without swinging. Jim Hickey attributed the poor outing to bad fastball location, and that was clearly an issue. 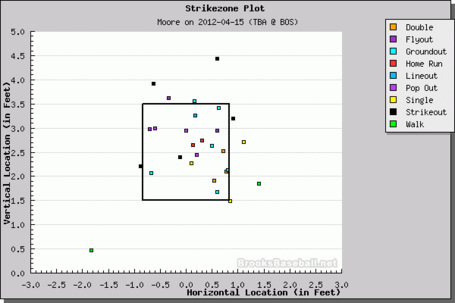 Check out the yellow, orange and red pitch locations. He allowed eight hits on the game; all of them were on fastballs except one, the single to Kevin Youkilis. That can be seen on the bottom right corner. It was a changeup and actually probably one of his better pitches of the game, and Youkilis had to put a good swing on it to hit it up the middle. That leaves seven fastballs, all in hittable locations. The ones that weren't right over the plate were either low, inside or both. Those are pitches that left handed batters traditionally crush. His stuff is great, but he wasn't able to pitch inside effectively on Sunday.

His offspeed pitches were not very effective, and that probably allowed Boston to wait for fastballs. About one third of his 101 non-intentional balls were offspeed, and while it will certainly be possible for him to succeed throwing 67%+ fastballs (David Price does), it's tough to do so when batters don't have to respect his other pitches. He threw 33 changeups and curveballs combined, and only six of them were for called strikes. If a batter identifies the pitch and knows there's a great chance it's missing for a ball, why not wait for a fastball? Command of the strike zone and pitch selection have been foundations of their powerful offense for years, and Moore's command just wasn't up to par on Sunday.

His curveball should be a big swing and miss pitch for him, but on Sunday it wasn't: not once. Of the 11 curves he threw, only five were strikes. Three of them were called strikes, and two were either put into play for an out or fouled off. In this game, the Red Sox didn't seem to think the pitch was much of a threat. There likely isn't anything wrong. It just appears that in this particular start, he didn't have a feel for commanding the pitch and putting it in places that entice batters to swing.

He used his changeup much more than his curveball, and I'd imagine that Boston using seven right handed hitters probably has something to do with that. He did get a handful of swinging strikes with this pitch, and his 16:6 strike:ball ratio works. The velocity difference was just over 9 MPH, and that's good enough to get batters out in front. To me, the movement on the pitch wasn't there. Cement mixers are breaking pitches that don't break, and and a lot of his changeups seemed flat to me. 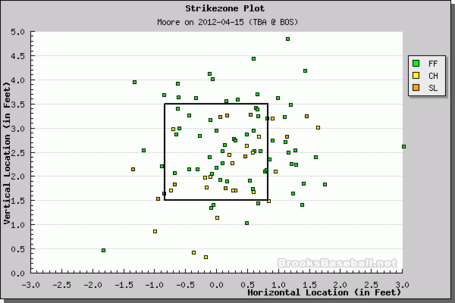 Look at the yellow pitches. There are some that are low in the strike zone near the outside corner for righties that are in good locations, but there are just as many that are way too low to entice batters or some up in the zone and very hittable. The Red Sox were only able to foul off these pitches off, but just being able to do that allows them to extend at bats and wait for more fastballs.

In conclusion, while Moore might be tipping his fastball again, it probably wasn't an issue in this game. His fastballs were in great places to hit, his curveball had no command or control, and his changeup probably only had the latter. His stuff is so good, but if the offspeed pitches aren't located well, then batters can lay off them, and his mistake fastballs will get hit, no matter how good his velocity is. Moore is a notoriously slow starter, and it may just take a little more time for him to have the necessary feel for all of his pitches.