Rays 3, Jays 7: Are We Almost To Minnesota Yet?

Share All sharing options for: Rays 3, Jays 7: Are We Almost To Minnesota Yet?

Understanding sample size is important. According to Pizza Cutter’s iconic study, it takes 300 PAs for HR/FB to stabilize. It takes 200 PAs for BB% to stabilize. Good analysts understand this concept and stick to it, plying their trade on meaningful data. They also know that they aren’t scouts, and don’t attach undue weight to what they think they see.

But sometimes one video really is worth a thousand plate appearances.

I’m pretty sure that if I found a lonely Pacific island, never before contacted by the outside world, and showed them this swing, their elders would be able to wisely tell me, "That man will lead the American League in home runs." If their elders were as old as ours is here on DRaysBay, they’d probably also point out that he was likely to lead the league in walks, as his swing is "scarier than the burp of the Volcano God."

And then their elders would mercilessly troll me about how our third baseman can’t field his position (three errors) and should be DFA’d.

Bullets below the jump. 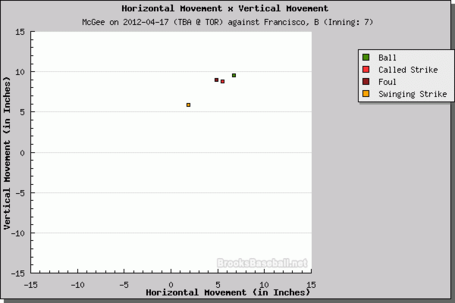