The Danks Theory Against Ricky Romero

Share All sharing options for: The Danks Theory Against Ricky Romero

If you're a regular reader of this site then you're likely familiar with the term "The Danks Theory". If not allow me to explain. The Danks Theory is a term coined by Tommy Rancel, former Editor in Chief of DRaysBay, to describe a certain lineup strategy employed by Joe Maddon and the Rays. In said strategy the Rays construct their lineup to neutralize a specific above average pitch from the opposing starter. It was first employed in 2010 against White Sox starter John Danks. It's since been used numerous times against pitchers such as Shaun Marcum, Dallas Braden, Tim Wakefield and Ricky Romero.

The main weapon it's designed to take away is the changeup. Braden threw a perfect game against the Rays utilizing his changeup against a right handed heavy lineup. Never again shall they let that happen. I mentioned Ricky Romero, whom the Rays faced off against tonight. Over the past three seasons he's thrown his changeup over 20 percent of the time, by far his second most used pitch. He faced the Rays five times last year with mostly good results. Last night was their first meeting of 2012, and the first time the Rays employed The Danks Theory this season. How did it work?

The lefties Maddon started, Carlos Pena, Luke Scott, Matt Joyce and Reid Brignac, went a combined 5-11 with a home run and a ball Pena smashed to the wall in right, but he got thrown out on while trying to stretch it into a double. Joyce hit a hard liner in the second inning, unfortunately it went right to Adam Lind at first, who stepped on the bag for a double play. Only Scott looked lost against Romero, going hitless in two terrible at bats.

Romero was most effective working down and away to the quadrant of left handed batters, getting a lot of swinging strikes on those pitches. In fact, left handed batters didn't make contact on one pitch down and away, as the plot below indicates. He got in trouble when he left things up and in, which is the case with most pitchers.

It's a small sample, but Romero seems to be throwing his changeup differently to left handed batters this season. Looking at the HeatMaps on FanGraphs you can see the location of them this year compared to 2011. 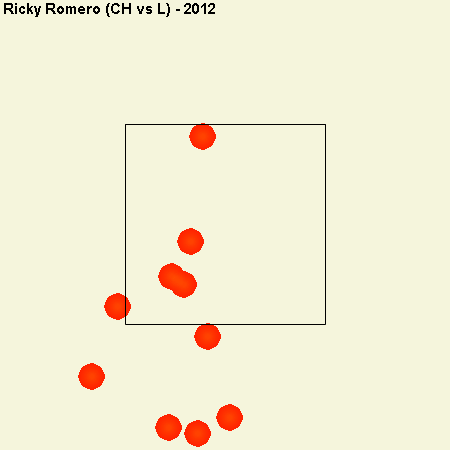 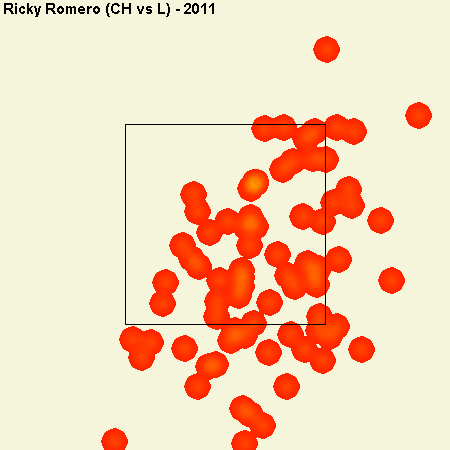 Not that it mattered last night against the Rays. Romero threw exactly one changeup to a lefty, to Carlos Pena in the fifth inning, but threw 10 to righties. Instead he relied heavily on a sweeping curveball to tame the southpaws. The goal of The Danks Theory is neutralize a pitcher's best offering. The Rays did more than that, they virtually eliminated it, allowing their left handed hitters to exploit Romero's reverse platoon splits. The rest of the Rays lineup may not have had much success against Romero but for at least one night The Danks Theory worked exactly according to plan.