Rays 12, Jays 2: Season Not Over Edition

Share All sharing options for: Rays 12, Jays 2: Season Not Over Edition

The book on Brandon Morrow is that he’s a dominant pitcher from the windup who falls apart when he has to pitch from the stretch with men on base. There’s some evidence to back this up. Early on in this season, the book on the Rays is that they can get men on base, but once they do, they fall apart. There’s very little evidence to suggest that this is a chronic flaw. Still, it stacks up as a [flawed] immovable object versus a [flawed]irresistible force. Who would win?

Well, to start the first inning, Desmond Jennings hit a dribbler up the middle, but Ben Zobrist made the mistake of homering to clear the bases (rally killer), and Morrow was able to get out of the inning (although Longoria did send Bautista crashing into the wall to make a double saving catch).

In the bottom of the first, we had our first look at another interesting battle: David Price’s power against Jose Bautista’s power. With a man on second, Price started with a fastball in for a called strike. He then threw a beautiful changeup right on the outside bottom corner for another called strike, sending Bautista into a fit of obscenities. Now Bautista was angry, and I don’t like him when he’s angry. He fouled off an inside fastball, and hit a fastball that must have been a foot off the plate straight up the middle for a single, scoring the run. That’s plate coverage. He’s the best hitter in the world.

After Encarnacion lined a pitch the other way for a single, Price got mad. I doubt the Blue Jays like him when he’s mad. He upped his velocity to 97 mph to strike out Adam Lind on a good fastball looking, and then absolutely overpowered Brett Lawrie on three straight fastballs.

More Titanic Matchups below the jump. 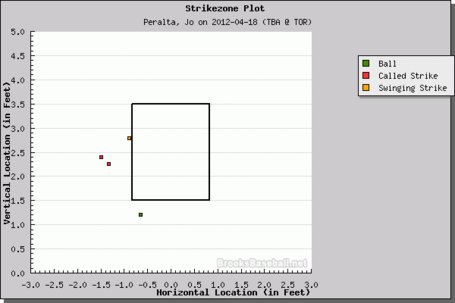 This was a friendly reminder that the season is not over. Sometimes the wins come easy. Today we were on to Morrow, now on to tomorrow.