Nearly one year ago, this site released its three-part stadium (pt 1, pt 2, pt 3) proposal series which provided some of the best discussion on the site during the 2011 season.

Since that time, there have been several updates, a lot of which contain a lot of re-hashed material mixed in with some new tidbits from time to time and our friend Noah Pransky does a fantastic job at his Shadow of the Stadium blog updating those news items as they happen.

There have been several interesting news items of late related to the stadium situation that deserve a bit more attention as fans wait for the stadium discussion to stop spinning its wheels and start showing some public progress.

Michael Sasso of the Tampa Tribune had a piece last weekend which described how Brooklyn, NY is using the EB-5 program to raise money to help offset the costs of the new basketball arena complex for the New Jersey Nets. The EB-5 program has brought in more than $2.2 billion, with approximately $1 billion coming in the past fiscal year according to reports on Bloomberg.com The way the program works is affluent foreigners can qualify for a green card for themselves and their families by investing at least $500,000 into Targeted Employment Areas designated by the EB-5 program. If someone wishes to invest in the program in a non-TEA area, the fee doubles to $1 million.

According to the latest report from the program, neither Pinellas or Hillsborough County qualify for TEA designation in 2012 so any efforts of either county to tap into the EB-5 funds would have to come from those willing to front $1 million to get involved. According to Sasso's article, 776 foreigners took part in the program in 2007 but that figure has nearly quintupled as 3,805 foreigners took part in the program in 2011. Chuck Sykes, the co-chairman of the Chamber of Commerce in Tampa admitted to Sasso that the group has looked into the funds just as folks spearheading new stadium efforts in Oakland have done.

The attractiveness of these types of funds is that they do not cost the local taxpayer anything so the more EB-5 funds a project can attract, the less the local government would have to ask of its taxpayers or the less ownership would have to put into the project. The city of Tampa stated as recently as six months ago that it could contribute $100 million toward a new stadium effort through tax increment funding plans. We know from discussions in 2009 related to the waterfront stadium plans on the Al Lang site that the Rays were willing to contribute as much as $150 million plus cost overruns to new stadium construction efforts. If we round off the team's contributions at $200 million and the $100 million from TIF funding, that leaves $200 million outstanding. If just five percent of last year's EB-5 applicants went toward a new stadium project in Tampa, that would cover the final $200 million toward a hypothetical new stadium price tag. However, that does not include any monies toward what would likely be required to end the current use agreement between the organization and the city of St. Petersburg. Likewise, a deal could break out similar to the one recently worked out to keep the Vikings in Minneapolis.

The Boyfriend is Back:

Last month, Hillsborough County Commission Chairmen Ken Hagan declared his willingness to be the "boyfriend" in the Rays-St. Petersburg divorce. Hagan held a vote yesterday and by a 6-1 vote, the commission approved a measure to allow the county attorney to review the use agreement the Rays have with St. Petersburg. The one dissenting vote came from Al "Chief" Higginbotham who noted that there have been discussions setting the first dollar amount from any potential lawsuit by St. Petersburg at $100 million. Hagan has been the one guy who has been pushing this issue for a while now. It is his belief that his commission can talk to the Rays about their plans, goals, or the viability of the team staying in the region as long as they avoid negotiations or contracts regarding any specific facility.

Tampa Maymor Bob Buckhorn has not exactly been quiet either. He most recently gave an interview to the Tampa Bay Business Journal and closed the baseball portion with something that echoes against what our stadium proposal said last year:

He still believes the Channelside area is the best place to put a stadium development for its potential to link Ybor and downtown. The development could be "transformative" for the city, he said.

Tampa Bay Lightning owner Jeff Vinik is making a bid to purchase the Channelside area. Our colleagues at Raw Charge explain how this benefits Vinik and the Lightning but putting a baseball stadium in the area makes it a very attractive complex nearly year-round. Re-development of areas is becoming quite the profitable venture in other parts of the country as they better exploit the economics of land use.

BuildItDowntownTampa, a coalition of fans who are concerned about keeping the Rays in the Tampa area, have sent an official letter to Commissioner Bud Selig's offce urging the commissioner to state a position on the stadium debate and set up a committee to review it. This comes before news that the Oakland A's were hopeful of forcing MLB to speak up on their own relocation efforts as they continue to push for a move to San Jose. The Giants are as protective of San Jose as St. Petersburg is of the Rays. Both the group in Tampa and in Oakland wish for Selig to exercise his powers under "the best interests of baseball" to force action but given Selig's glacial approach to first drug testing and now expanded use of instant replay, it does not seem very likely.

The big fancy new website officially launched this project this past Monday and someone has already suggested the city look into the waterfront area for a new ballpark. As the Tampa Bay Times put it last week:

Most of the money for InVision Tampa comes from a $1.18 million U.S. Department of Housing and Urban Development grant. The money had been earmarked to do a corridor study along Nebraska Avenue in anticipation of high-speed rail coming to Tampa. But after Gov. Rick Scott killed high-speed rail, the city received HUD's permission to study an area up to 2 miles from downtown.The InVision Tampa study area now stretches from downtown to Ybor City on the east, Armenia Avenue on the west, and north along Nebraska Avenue to Hillsborough Avenue. The work also will cover land use, transportation and other factors that could play a role in whether a Major League Baseball stadium could ever be built downtown, an idea Buckhorn likes.

This rather large initiative has multiple parts with the next part looking at methods of transit, but not the financing of them as is the Florida way of doing things. Transit initiatives have slowly been gaining momentum in recent months and any stadium solution is going to need alternate transit avenues for fans to utilize to get from point A to point B in efficient manners that do not involve sitting in traffic on bridges and arteries for excessive periods of time. The two proposals below would certainly help move people around the region whether the Rays stay put for the life of their use agreement or were to relocate across the bay. (click all images to enlarge) 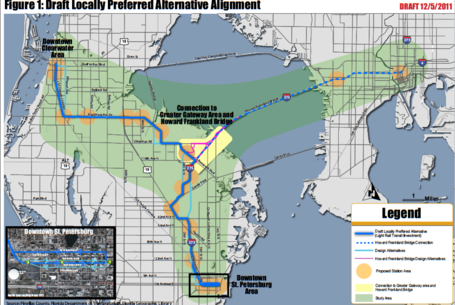 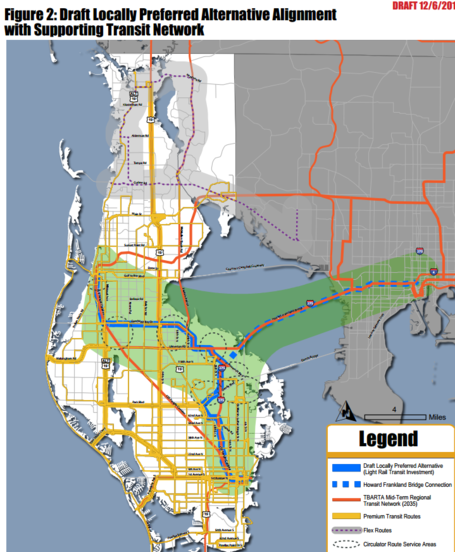 Where are we in this process? Truth be told, this stadium process is not any further along than it was when we first put forth our proposal. Commission Chairman Hagan is the most vocal person in terms of getting something done rather than talking about what cannot be done, but the timeline below is one that must stay in the forefront of these discussions. If that arrows moves to the right again this time next year and the discussions are still stuck in neutral like Jose Molina trying to get out of the batter's box after putting a ball in play, it is time to worry.