This Week in Sun Sports: TK, You Sly Dog Edition

Share All sharing options for: This Week in Sun Sports: TK, You Sly Dog Edition

Welcome back to This Week in Sun Sports, kids. As always, we'll be looking at the oddities of the Rays broadcasts from this past week. Anything from the announcing, to a crazy video segment, to the fans in the stands. If it's on Sun Sports, we see it. Because--like L.B. Jefferies--we're always watching.

This week covers Wednesday, April 18th - Sunday, April 22nd. If you missed last week's, you can find it here.

In regards to the GFFP, we'll start in the bottom of the seventh inning: 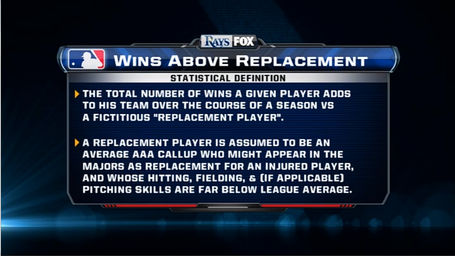 Well, would you look at that? Just one week after giving the viewers a WAR leaderboard, Sun Sports decides to tell us what in the hell it means. In case you thought last week's chart was good for absolutely nothing, Todd Kalas was here to narrate this nifty explanation to you. Regardless of whether this explanation is technically correct or not, I was most impressed with TK's ability to get this out intelligibly in under 20 seconds. Way to go, TK!

After the graphic disappeared from the screen, we were given a shot of Sean Rodriguez, who clearly didn't understand what Kalas was talking about: 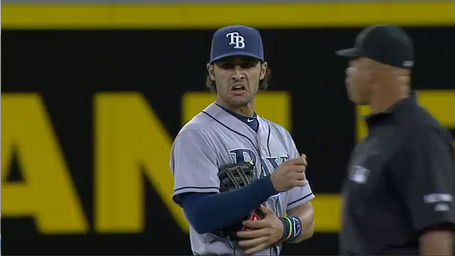 Wolverine, an Irish Jig, and "ToddKalasballingoutofcontrol.info" after the jump.

We flash back to the start of the game: (h/t Collette for the gif)

Carlos Pena is dancing one helluva jig in the center there. Look at his feet go! I think that's Reid Brignac who's getting all pumped when Carlos gives the turn-it-round-flip-it-and-reverse-it encore-ground-pound. Look at the rousing handshake in the background, too. That's a winner.

In the top of the ninth, the crew helps answer the question we've all been asking: "Is BA's goatee the missing link in Luke Scott's 'Wolverine' chops?" 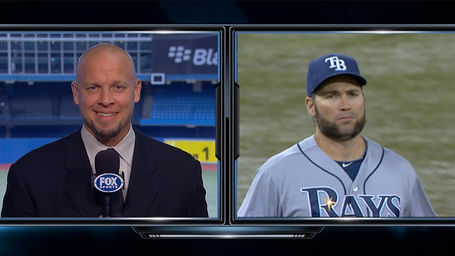 I'll leave that up to you. Here is Brian Anderson's opinion:

The other question, I think, is,"Who farted?" An argument could be made for either picture.

Our one "on the field" segment of the week comes in the first inning when Jose Bautista apparently forgot to swing on a center-cut Jeremy Hellickson fastball:

Helly's going to get a backwards-K for this, but I think he should get credit for the swinging-strike. It's not his fault Bautista forgot to swing until after the call was made. I love seeing a guy like Bautista get flummoxed at the plate. He's been so locked in against the Rays (and everyone else) the last two years. Seeing this makes me think he's actually human. (Unless that's just what he wants us to think.)

In the top of the third is where we get a glimpse of the "mack-daddy" that is Todd Kalas. 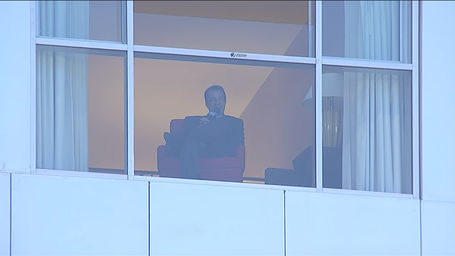 There's TK reporting from one of the hotel rooms that overlooks the Rogers Centre. Not a bad spot to watch the game... among other NSFW things (google it if you dare).

Here, Todd looks like a man just looking for a good time. Dewayne and BA agree.

BA: You gonna stay for a night cap?

DS: And then some.

We expect the innuendo out of Brian Anderson, but when De-Wayne gets in the action, you know we're in for a treat. They kept tabs on Kalas and found him again in the bottom of the third: 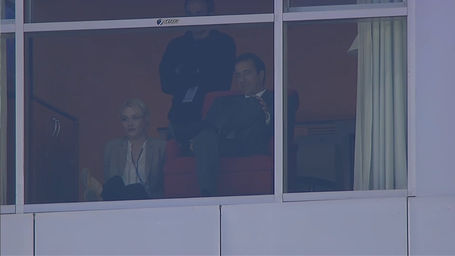 Once again, Dewayne and BA covered this perfectly:

DS: Of course, wherever Todd Kalas is, soon there is...company

BA: With a chaperone

DS: Very seldom is he a man alone with his thoughts

BA: Unless that's her name.

Whew. We don't often see Staats play anything other than the straight-man, but when we do, it's awesome.

We'll have some more of TK's Red Shoe Diaries in a bit, but first, "Hide yo kids, hide yo wife," Rjw123 claims to have found Antoine Dodson rocking a D-Rays throwback: 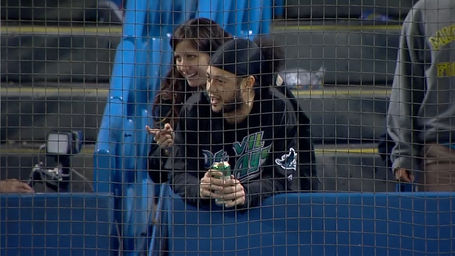 A bit too much beard, in my opinion. Maybe he's been inspired by Luke Scott?

After TK's hotel rendezvous we all knew he'd be in some deep... water? 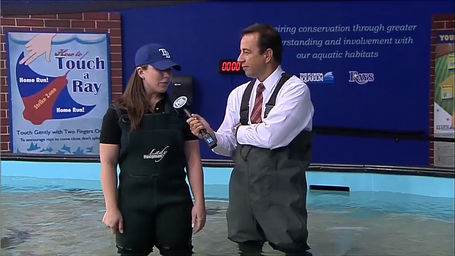 In the top of the third, TK interviewed Katherine, the PR manager from the Florida Aquarium. This is why you gotta love Todd Kalas. The man is willing to go that extra mile to give you those gripping interviews while simultaneously showing the ladies a good time. He absconds to hotel rooms, wades with women in the cool, shallow waters, and, of course, 'talks shop' with the talented Fox Sports Florida Girls. He always listens to what these women have to say and takes it to heart.

Sometimes he takes it too far...

I'm guessing Kalas was just following the instructions of the "Touch a Ray" sign behind him (pictured better above). He's clearly hit a 'home run' here. I'm just glad, for all our sakes, he didn't find his way into the 'strike zone.'

Of course, Dewayne and BA weren't silent on the matter:

BA: Todd Kalas always up to his waist in it.

Most people would think that this would be the wrong way to go about macking on the ladies, but I'm not so sure. Look at this photo from the end of the inning: 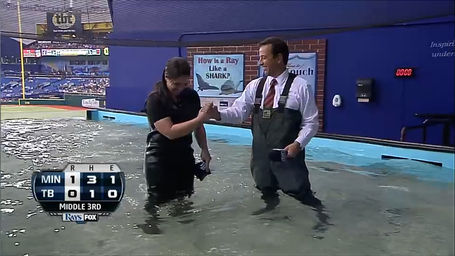 It's tough to see, but notice how Kalas interlocks his fingers with hers as they shake hands.

There's no screen-cap or video for this next one, but did anyone notice what song was played after Evan Longoria's homer knocked Liam Hendricks from the game in the bottom of the sixth? Nsync's "Bye Bye Bye." I don't know if this is a thing at the Trop, but I certainly haven't heard it when I've been there or watched on TV. Either way, it's certainly a "dick move." Guy gives up a huge bomb, gets yanked from the game, and then has to listen to Nsync? At least give him some Backstreet Boys to ease him down. Maybe some 98 Degrees if you're feeling generous. Wait, the Rays lost that game? Forget what I said, RELEASE THE HANSON!

In the bottom of the second, we learned that you DRBers are really getting lax with the photoshopping: 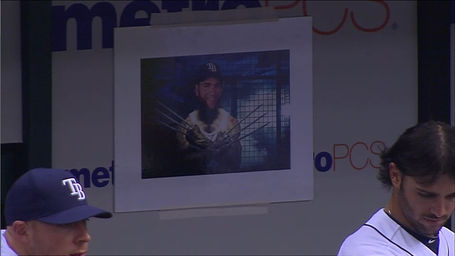 That's a fine job, but how hasn't anyone done that already? With twitter and the spread of social media, that might have been your work on the dugout wall. Get 'em next time, guys.

In the fifth inning, we got a nifty graphic of the last five Perfect Game hurlers (warning, two of them might make you vomit): 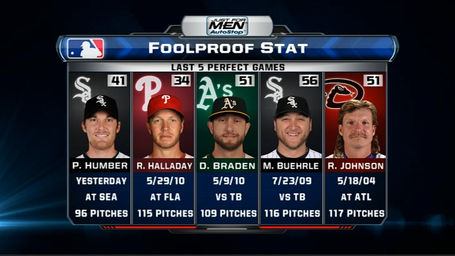 This was, of course, in honor of Phil Humber's completely-expected-and-unsurprising-Perfecto a day earlier. My only question, is: "Why isn't Randy Johnson wearing a hat?" Is it because there hasn't been a decision on which team he'll go into the Hall of Fame representing? Perhaps he has a contractual obligation to Just for Men? Maybe, but I'd like to think that the graphic designer saw those flowing mullet-locks and didn't dare hide them with a CGI ball cap. I can literally smell the musk wafting from his mullet and 'stache. When I stare at that haircut long enough I can hear an eagle screech. It's probably just my brain tumor, but it's a patriotic brain tumor.

After that look at perfection, Todd Kalas admits that he is not so perfect when he estimates the number of Little Leaguers at the park on Sunday: (h/t benderbrodriguez) 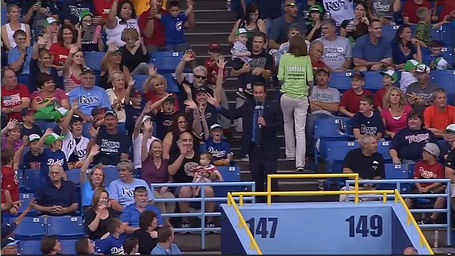 TK: I have no idea the exact number, either six to nine thousand Little Leaguers here today.

If you're going to guess, that's the best you can do. I see a lot of teams represented in here: Twins, Phillies, Dodgers. If I had to guess how many Rays fans were in that section, I'd say between four and 20.

We'll finish this week in the top of the eighth inning when Carlos Pena attempted to make a play in foul territory on Josh Willingham pop-up: (h/t Collette for the gif)

Pena's boxed out by this hulking "Rays Fan," and for good reason: That's former NBA center Matt Geiger. Clearly he's forgotten his playing days are over. Geiger was "relocated" after this fantardation, hopefully to somewhere far from the field of play. I don't care if this guy is a former NBA player, he is radioactive and should be kept away from all Rays-related activities. If only there were some sort of device or 'counter' that could detect his presence. I'm looking at you, scientists.