Does Hideki Matsui Have What It Takes To Be Godzilla Again?

Share All sharing options for: Does Hideki Matsui Have What It Takes To Be Godzilla Again?

As you likely have heard by now, the Tampa Bay Rays signed Hideki Matsui to a minor-league deal quite recently, and he's expected to serve as depth for the Rays in case Brandon Allen doesn't work out or someone gets injured.

As we've covered a few times here, the Rays' bench is woefully weak offensively, and in desperate need of an upgrade. Although Matsui may have only had a .309 wOBA last season -- in simpler terms, he had a .251/.321/.375 slash -- that sort of production would still be a step up over basically anyone on the Rays' bench at the moment. Matsui doesn't have to return to his "Godzilla" form in order to provide value to the Rays; he merely needs to prove that his bat is still serviceable.

So after hearing about Matsui's signing, my interest was piqued. How much does Matsui still have left in the tank? Were there any signs in his performance last year that suggested he might be finished? (And if not, why did so many teams pass over him this off-season?) Or is there a good shot that he could be productive enough to help the Rays? Let's take a quick look.

First of all, some context. Matsui is currently 38 years old, and his offensive performance dropped off significantly last year with the Oakland A's. He went from a .378 wOBA in 2009 to a .356 wOBA in 2010 to a .309 wOBA in 2011. At least at a quick glance, that's what's called "Father Time is a b*tch." He catches us all eventually, and it sure looks like Matsui started to finally feel his age in 2011.

If we look deeper at Matsui's stats, though, we can even see the tell-tale marks of Father Time. Matsui's power was at a career low in 2010, and his .124 ISO was on the same level as Starlin Castro, Delmon Young, and Juan Rivera. His batting average on balls in play was also down (.274 BABIP), suggesting he either got a touch unlucky or wasn't quite hitting the ball as hard as he used to.* His walk rate was also down to 9% (normally around 12%) and he swung at slightly more pitches outside the zone, so again, there are a few possible scenarios: he started pressing, his ability level dropped off a bit, and/or pitchers knew he wasn't as potent and didn't pitch around him as often. It's impossible to tell exactly why Matsui's plate discipline wasn't quite as good, but these scenarios still suggest his power isn't quite what it used to be. 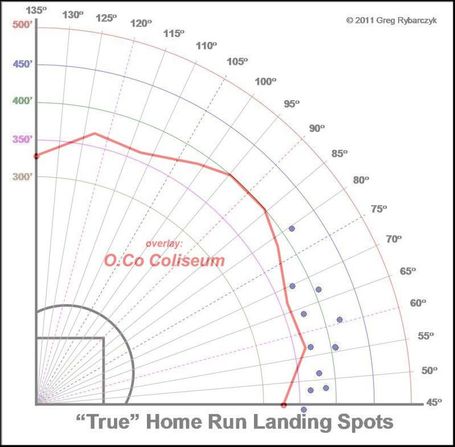 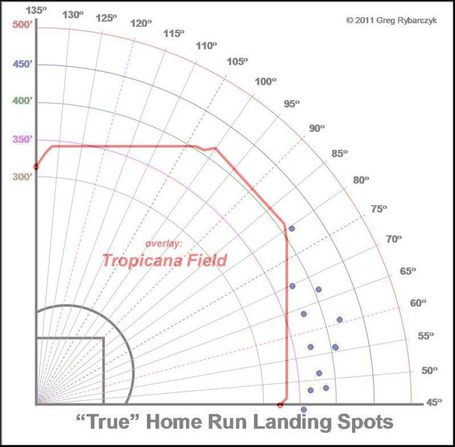 I'm not entirely sure what to think of it, but at least from this, it looks like the Trop might be a bit more homer friendly for Matsui. It's certainly no Yankee Stadium, but any boost that Matsui gets to his power would make him a more valuable player overall. And if he can bring his power up just a bit, it's possible that walk rate shoots up and we're seeing a mini-revival of Godzilla.

In the end, though, only time will tell. Matsui may have truly lost some of his batting eye last year, and he may have fallen low enough that he struggles to hit well in Triple-A. Maybe his power won't return, no matter what park he's playing in. When it comes to forecasting aging, we're all merely throwing darts at the wall; we know generally how players -- as a whole -- age, but damned if we're horrible at predicting how individual hitters will age. Just look at Big Papi, or Jeter for that matter. Both of them have already been written off multiple times over the past few years, and they're still trucking along better than any of would have thought possible at this point.

The Rays likely don't have any better of an idea than we do on if Matsui will become a useful bat for them, but hey, the only way to find out is to try. And with the current state of the Rays' bench, I'm glad they're willing to take some flyers on Question Marks (Matsui and Allen) in the hopes that something pays off. When you roll the dice with Father Time, you're playing against loaded die...but even then, sometimes you win one.