"David Price is a thrower, not a pitcher."

"David Price can’t handle the pressure of the big game."

Well, with all due respect to the playoffs, I’m not sure a game can get any bigger for Price than this. Price has two dates stitched into his glove, each for one of his best friends: 8-17-07 is the date that Nathan Stephens died after collapsing on a basketball court, and 4-24-08 is the date Tyler Morrissey died in a car crash. And on this most personal of occasions, Price treated the rest of us to a demonstration of exactly the type of pitcher he is.

Price lasted all nine innings, allowing five hits and one walk while striking out six batters. He threw 65 fastballs, 11 cutters, 29 changeups, and 14 curves, getting a strike 67% of the time. He only had a 5% swinging strike rate, but I don’t think that accurately describes his dominance. The Angels were befuddled. They were out in front of his offspeed offerings, they were behind in the count all game, they took pitches for strikes that they couldn’t have hit if they tried, and they rarely made good, solid contact.

As an example of how masterful Price was today, let's walk through the Mark Trumbo at bat in the second inning. 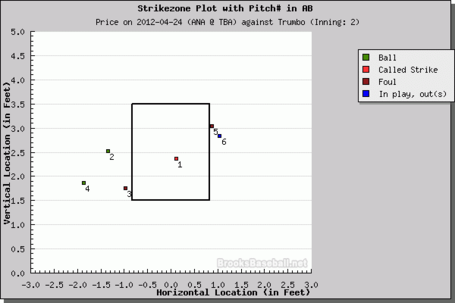 Remember that Trumbo is a righty and that this is from the catcher's view.

This at bat doesn't look dominant if you just read it as six pitches, no swinging strikes, and a ball in play, but the batter never had a chance.