The staff recently had a rather long email exchange about Jeff Niemann to discuss an article that never came together. Instead of scrapping the work, we thought we would share the discussion with you all.

Hahmann: Trying to flesh something out an idea on Niemann. Whats his worth to the Rays and to other teams if he can't get past this 75 pitch wall? Also, whats it do to his career.

Collette: a mid-level prospect at best.

The Niemann/Davis caddy situation has merit since he's the guy in the most danger of failing to make it through 6.
Maniac: I think the Rays can get significant value out of the #5 sot if they caddy those two. Niemann looks awesome through the first 75 pitches.
Mitchell: I like that caddy as well, even if it were Davis starting and Niemann in relief. I wish Maddon would let Davis go three innings after Niemann or in any game the starter leaves after 6 innings with a lead. Would like to see Maddon exploit the save stat and get Davis a handful of 3-inning "saves" and "boost" his value to those who care about that.
Hahmann: Davis working three innings wouldn't boost his value anymore than working one would.Davis playing caddy would affect how Maddon manages the bullpen the games prior.
Mr. Negative: As inviting as the caddy idea sounds it isn't a real solution and shortens the bullpen.
The question in my mind is how can the Rays get Niemann past this 75 pitch wall?
Niemann has pitched 6 or more innings in 51 of 82 starts since 2009. I would guess that would be pretty good for a #5 starter in anyone's rotation.
The numbers on 75-100 are bad in terms of HR allowed. If he could find a way to avoid the home run his numbers would be tolerable to push him to close to 100 pitches.
Pitches 1-25 = 1HR/35.3 PA
Pitches 26-50 = 1HR/39.9 PA
Pitches 51-75 = 1HR/63 PA
Pitches 76-100 = 1 HR/17.8 PA
Could his problem be stamina? Does he get tired and is unable to get the downward movement on his pitches? His walk rate goes from 13.4% to 12.3% to 6.3% to 14.1% through the progression of 25 pitch segments so it's not like he loses control.
Look forward to reading a few theories on how to fix him.
Mitchell: It has to be stamina, no? From the few pitchf/x charts I've looked at he tends to leave the ball up a lot more later in the game. Harder to repeat your mechanics when you are fatigued.
Slowinski: That sounds like a great post idea...I'd love to see some pitch f/x charts backing up some observations about his stamina.
Woodrum: True story: The Rays starters pitched the most innings in the AL and 2nd most in the MLB in 2011, while their relievers pitched 20.2 innings fewer than the next closest MLB team -- the Mariners. Yankees relievers threw almost 100 innings more than Rays relievers -- that's like needing an extra pitcher entirely. 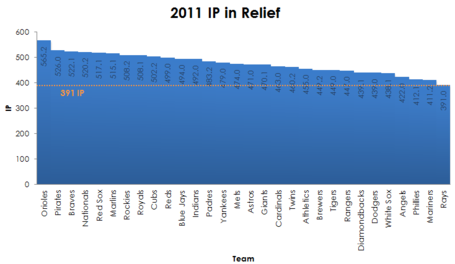 In other words: The remainder of the starting rotation is good enough to allow for a caddie situation. Also, the Rays have made this an option year for Brandon Gomes, Alex Cobb, and a few others, giving them enough flexibility to keep things moving as needed.
Mr. Negative: Woody, that was last year. The great starting pitching work and lack of innings from the bullpen should be viewed by management (for now) as an anomoly and prepare to need extra work out of the pen in 2012.
I believe (and I wrote about this) that the Rays management expected this and it is why they went out over the winter and targeted relievers and ended up with Badenhop, Lueke, and Rodney and had no desire to not tender a contract to JP Howell.
If suddenly guys are giving the Rays more innings over an extended period of time (which should happen at some point with this staff) the caddy system could be used here and there.
Guess what I'm saying is that there is pretty much no way in hell (in my strong opinion!) that Joe Maddon will view a starting situation w/caddie. His bullpen will be dictated by game situation and not scripted to fill the caddie role. For instance, if Niemann is scheduled to pitch on a Wednesday and the Rays starter gets in early trouble on Tuesday he will not keep Davis out of the game for Wednesday Caddie action...he will put Davis in the game as needed Tuesday. If by chance, Davis is fresh and Niemann gets around 75-85 pitches and the game is early in the 5th or 6th then maybe he goes with Davis to work 1+ innings or maybe he goes with a matchup here/there and bypasses Davis.
Woodrum: A 3-year anomaly? 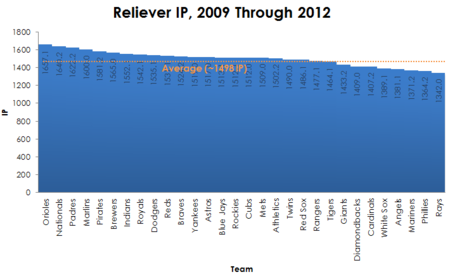 Over the last three years, the Rays have averaged about 80 fewer IP than the league average. And the distribution is right-skewed by the Rays and Phillies. Most teams have pitched ~90 to ~100 IP more than the Rays per season. That's the equivalent of needing an extra bullpen workhorse or swing man.
I agree that Maddon should be and probably will be flexible (and frankly, I'm not sure if we disagree much at all), but we've had guys in our bullpen (Andy Sonnanstine) who've pitched as little as, I believe, twice a month. The Rays have more than enough flexibility -- considering the present state of the team's depth and option usage -- to do a caddie. Does that mean they will pull Niemann after 75 no matter what? Heavens no! If they can use David just for 1 or 2 batters -- or none at all -- then they are going to choose that route. But if they don't dedicate a day for Davis to pitch, he could very well not get many days to pitch at all.
Mr. Negative: Hey Woody...interesting thoughts but I'll say it again...NO WAY IN HELL does Joe Maddon EVER go to a Caddie system with any reliever. You like how forceful I am with all caps? Makes me feel like all powerful even if I'm completely wrong.
Wade Davis will be used regardless of an upcoming start by Niemann - he'll never be slotted to come in ahead of time - end of story.
Now - if it turns out I'm wrong - I'll bow to your greatness!
I just laugh at 6 man rotations, caddies for starters, and uber-platoons...been watching baseball too long to believe in any of them..they are like Santa Clause, Easter Bunny, and Tooth Fairy...all great concepts but not based in reality.
Free Zorilla: That was true of shifts, Keppingers at DH, 6 man rotations, and many other thugs that the Rays have taken to extremes
Woodrum: "Makes me feel like all powerful even if I'm completely wrong."
I lol'd. That's why I write in all-caps, LITERALLY, all the time -- even when using the word "literally" not literally.
Mr. Negative: No...don't use humor...we need to draw a line in the sand and fight this one out for hours/days/weeks and get real personal about it!
Have to excuse me today...I'm a little fatigued at work...been doing fiscal crap since Monday....having an Office Space type week.
BenderBrodriguez: I'm not sure if I buy into the whole "Niemann fatigues after 75" theory. Over his career his K/BB numbers hold strong through that range. I think we might be seeing a little random variation-tough to be certain, but I want more data before I declare him good for 5 innings only.
Whelk: Bender - I'm not sure if I buy the "he fatigues after 75 pitches" thing either, but you have to admit that Maddon has been quick to pull him even before he reaches 100. I wonder if it's so much about Niemann, being especially un-staminaed or if just has to do with Niemann being our 5th starter. If you have Shields going the next day, you can use the bullpen, which will be better than the 5th starter the 3rd/4th time through the order.

In this case, I think Maddon will play the matchups, rather than just assigning a caddie. Funny, because it's challenging the idea of a back of the rotation guy as an innings eater. Maybe he can, but you don't want him to.

Free Zorilla: I'd also be curious at distribution of prices ad performance by month over his career. Is it possible it takes him longer to get stretched out?
Woodrum: This is the first year I've heard about the 75-pitch thing, but for -- LITERALLY -- 2 seasons+, I have advocated we move Niemann to the pen (rather than Davis) because his times-through-the-order splits are reminiscent of J.P. Howell:

Like Howell, the power numbers and BABIP jump in the third time through, thought of course, Howell's starting numbers were much more dynamic:

Mr Negative: I could pick it up on my Friday slot 1PM but it's usually pretty quiet as folks are gearing up for happy hour but the story would (see end of this email) lack the main components of the stats side. Items 1-4 are easy enough to write up for me. Item 5 is the part that I wouldn't be able to be effective.
I don't do the Pitch F/X data mining stuff but damn there is a lot of baseball items to just talk about with Niemann.
1. Are we expecting too much from a 5th starter? 51 of 82 starts of 6 innings or more since 2009, that's 62% of his starts. If I polled 29 other GMs/Managers and asked if they could be guaranteed that performance out of 1 guy as their fifth starter I'd think it be a unanimous hell yeah.
2. The 75 pitch thing. Is this a huge reason for Joe Maddon to alter his bullpen? I say no. If Niemann can get the team into the 6th inning on a consistent basis Maddon can run his bullpen like normal. If anything placing James Shields who routinely gives innings the day before Niemann is about all the protection the bullpen needs.
3. Why does Niemann get burned after 75 pitches. His BB/K ratio doesn't go down but the amount of HR/PA jumps big time. Is this a matter of conditioning more than any pitch selection? Is it simply the core fatigue that doesn't allow him to finish pitches?
4. Was he removed from his last start because of the pitch count? I think not. Joe Maddon has said in numerous interviews that his time is consumed with bullpen matchups. He scripts them out on his bike rides and right up to game time...(he's also said he doesn't want to platoon so much with position players..the added time helps his bullpen matchup time! [no- I don't have a link but it was in a pre or post game audio clip last year]).
In the Twins game Maddon played the role of using his best matchup guy at the most opportune time. He had McGee waiting for Mauer/Morneau and even if it was the 6th inning the time to go to that matchup was then. It's actually kind of refreshing to see a manager not let the inning # dictate when he goes to the matchup. If the game would of been 11-0 Niemann probably would of been allowed to stay in but Joe tried to nip the rally in the bud.
Questions:
How can Jeff Niemann overcome this 75 pitch difficulty?
Most of the story I would write would be about the theory and opinion of why we shouldn't worry about Niemann, how he is an excellent 5th starter, how Joe Maddon doesn't need to alter his bullpen in any way shape or form to accommodate Niemann, how he wasn't removed from his last start solely because of pitch count.
note: Mr. Negative's last comments and bullet points are being turned into two stories on Friday & Saturday.