Share All sharing options for: Season Preview: The Catchers

Let's face it - the catcher position has been a rather large black hole in the lineup throughout franchise history. The only time in franchise history that the catchers on the roster combined for as much as 2.4 WAR was in 1999 when John "Flash" Flaherty and Mike DiFelice combined for 3.4 WAR as they hit .286/.320/.430 as a tandem that season. At an individual level, John Jaso's 2.5 WAR season from 2010 is the best followed by Dioner Navarro's improbable 2008 season at the plate. Those two and Flaherty are the only catchers in franchise history to have a 2+ WAR season.

How bad has the offensive catching numbers been in franchise history (min 200 PA)?

Enter the Jose's, Molina and Lobaton. Molina's highest single season WAR is equal to what Kelly Shoppach did last season while Lobaton has all of 39 very unproductive plate appearances at the major league level. So why should fans show any optimism about this duo in 2012? There are some silver linings worth looking at.

Jose Lobaton was claimed from the Padres organization before the 2010 season and had a .329 wOBA with the Durham Bulls that season in 271 plate appearances. Last season, he surprised many by posting a .398 wOBA in 224 plate appearances with a .293/.410/.489 slash line and a 17 percent walk rate along with a near league average 22 percent strikeout rate.

Those last two rates are important against some recent work by Chris St. John that reviewed what minor league walk and strikeout rates tell us about prospects. He stated that, "the best category a player can fall under to succeed is a high walk rate and an average strikeout rate in Triple-A. Look who sits a top that table for the International League: 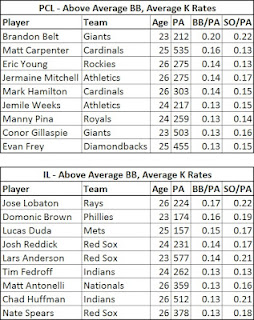 via The Platoon Advantage

He has always had high walk rates throughout his minor league career and his strikeout rate has been rather stable as well. The projections are not very kind to him since he has such a limited data set to work with. Marcels put him at a .299 wOBA in 220 plate appearances while ZiPS shows a .290 wOBA in 318 plate appearances. Given the fact the team has said they would like Molina to catch around 90 games, Lobaton is going to be a critical piece to the puzzle as long as the roster maintains its current shape.

He is considered to be a superior defender to Stephen Vogt despite the fact Vogt was ranked 22nd by Baseball America while Lobaton went unranked this season. Vogt's presence on the roster could be on tenuous ground once Upton returns, or the team could decide to listen to SternFan1 and send Brignac down for regular playing time until that plantar fascia works itself out. Vogt's season preview appeared earlier this month.

Jose Molina's value is wrapped up in his abilities behind the plate much more than his abilities at it. The casual fan will remember Molina with the Yankees and the Blue Jays giving Rays baserunners fits but readers here know that it is all about the framing and run prevention with Molina thanks to the work of Mike Fast and Bojan Koprivica. Molina becomes the best defensive catcher for the organization since Flaherty was behind the dish and should be a welcome sight to sore eyes that have had to watch the efforts of Navarro and Jaso in recent years.

The Steamer projections peg Molina with a .279 wOBA in 355 plate appearances while Marcel is the most optimistic of all giving him a .306 wOBA. If we combine the most optimistic projected stat line for Molina and Lobaton, we get a slash line of .244/.313/.369 and a .288 wOBA.

This is just a friendly reminder that the name of the game in Tampa Bay is more about run prevention than it is run production. When you ball on a budget, you cannot afford to have great production in every spot of the lineup, but the Rays should be much improved at shortstop this season offensively than they were last season. Catcher, the other weak spot last season, will have to settle for the improvements behind the plate and that could help the pitchers as much if not more than a more offensive-minded catcher behind the plate.