Share All sharing options for: Rays Sweep Yankees: Hellickson Celebrates His 25th Birthday With A Victory

Jeremy Hellickson celebrated his 25th birthday by remaining cool and calm in the center of the diamond. He was masterful in shutting out the Yankees and gave the Rays bullpen a much needed breather going 8.2 innings of shutout baseball throwing 118 pitches (66 for strikes) allowing 3 hits (all doubles) while striking out 4 and walking 4. Fernando Rodney who already has a win and a save on the season replaced Hellickson after a 2-out walk to Nick Swisher. Rodney was able to retire Raul Ibanez on a comebacker to the mound to complete the sweep.

Yankees starter Phil Hughes worked the first 4.2 innings throwing 99 pitches (66 for strikes) and gave up a RBI triple to Matt Joyce in the bottom of the first and a solo home run to Carlos Pena in the bottom of the third inning. Hughes took the loss giving up the 2-runs on 5 hits while striking out 5 and walking 1. The Rays scored their third run on a homer by Jeff Keppinger off Boone Logan in the 6th inning.

Sweep Notes: The Rays swept the Yankees to end the 2011 season and also on September 26-28, 2000. Today's sweep marks the second time the Rays have opened the season by sweeping an opponent since 2002 when they swept a 3 game series from the Tigers.

Injury Notes: B.J. Upton is going to begin a rehab assignment tomorrow in Port Charlotte. The hope is to get Upton 25-30 plate appearances and the rehab is expected to last about 10 days: The Rays hope to activate Upton on April 20th against the Twins.

"The big thing is to make sure his legs are well, that he's not going to get hurt running. And also throwing -- when you haven't run or thrown for a while, those are two big concerns, beyond just the fact that you're going to get your timing at the plate. So it's going to take at least that many at-bats or days to come back up here." - mlb.com

Missed Pitch of the Day: (Image From Brooksbaseball.net); Hellickson vs Raul Ibanez 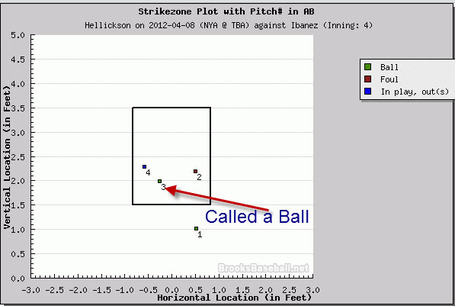