Share All sharing options for: This Week In Sun Sports: Opening Weekend Edition

Welcome back to This Week in Sun Sports, kids. As always, we'll be looking at the oddities of the Rays broadcasts from this past week. Anything from the announcing, to a crazy video segment, to the fans in the stands. If it's on Sun Sports, we see it. Because--like Rockwell's eerie feeling--we're always watching.

This week covers Friday, April 6th - Sunday, April 8th. If you missed last season's, you can find them here

As you can tell, this week will be a short one. With the Rays taking on the Yankees for the season opener, most of the focus was on the actual baseball and not the goofy shenanigans for which you really tune into Sun Sports. But fear not, gentle souls, we've found a little tomfoolery, a skosh of ballyhoo, and a scattering of chicanery to comment on this week.

What an opening day that was for the Rays. The Pena grand slam, the comeback off Rivera. It was the stuff of ages. There was even some serious managing from our favorite spectacled, Merlot-sipping manager, Joe Maddon. The master of the spreadsheet had his hands all over the game. From batting Jeff Keppinger in the cleanup, to safety squeezing twice (even with two strikes), the man did it all with the grace and mathematical precision of a professional. You never see Joe get flustered by a numbers-based decision. Well... almost.

In the seventh inning, after calling in Jake McGee to face the left-handed Brett Gardner, Maddon gave a very universal reaction when McGee issued a walk and was forced to face the right-handed Derek Jeter:

I'm fairly certain baker's dozens of Rays fans could claim to have said this exact phrase when Gardner walked. I know I did. If you aren't great with the lip syncing, try on the phrase, "cat plucking ducks" or "hat shucking bucks." If you're still not sure, I imagine someone can fill you in in the comments. This just reinforces what we all know, but sometimes forget when we put our sabermatrician's hat on: regardless of what the numbers are, on the field of play, anything can happen. And when it goes wrong, it "freaking stinks."

Hat tip to Jason Collette for spotting this at the end of the game: 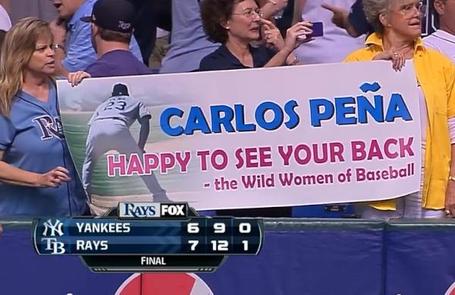 That's former Tampa mayor Pam Iorio and the "Wild Women of Baseball" paying homage to Carlos Pena's triumphant homecoming. These women are so excited by Pena's return that they botched the grammar a bit on the sign--or, wait. Ah, ha, you cagey ladies. I see what you're doing. You're being a bit cheeky, aren't you, Pam Iorio? You're referring to Carlos Pena's taut backside. His torquin' caboose. Did your friend on the left, Linda Hamilton, put you up to this in preparation for Judgement Day? Perhaps it was the lady on your right, Dr. Emmett Brown from Back to the Future (I'm really reaching on that one). I know it wasn't you, just like I know you're just scratching your nose in this shot. Let's hope so, because I'll bet your Seinfeld impression isn't that great.

Let's take a brief aside to talk about the serious issue of pediatric epilepsy. Here at DRaysBay, we care so much about this issue that we ban all anime from our boards for fear that the bright lights and flashing colors might harm some young reader. In the top of the third, our fears were realized:

Oh, the horror! Of course, this is only a few kids doing "The Worm" or whatever they're calling it these days. I'd call it a bag of ice and sitting down to pee for the next week, but I'm old and out of shape. Let's be honest, this kid is miserable. He has no concept of the move. The pioneers of breakdancing are literally rolling over in their graves (because they're still tweaking on speed). It's OK, I'd probably do that too if a bunch of girls cheered me on (or even just said 'Hi' to me). Either way, my favorite part of this is this kid's hands. Look at him wiggle his fingers as he writhes on the concrete. Those spirit fingers really complete the tableau.

Just before the bottom of the sixth inning, this guy decided to get down to the dulcet tones of Julianna Zobrist:

Yeah, the clip was longer live, but MLB.tv likes to cut in late, so this is all I have. I don't have much on this, just that of all the people I imagine dancing to Mrs. Zobrist's music, this is not one of them.

In a play you probably saw in the seventh inning, Evan Longoria hit a ball to right that was called a home run, but was later overturned and ruled a ground rule double due to fan interference. In case you didn't see it, this is the guy:

That is your typical RaYankee fan, for you. Notice his Yankee jersey and Rays hat. I believe the jersey always carries more weight in these cases. If this guy wants to even it up he should don some wristbands, or at least have a cowbell. He does have a glove, so maybe he's an eleven year-old boy and is just super-psyched to be there.

Another thing: What's with the glove raised to the sky in triumph? When you're in the first row and have to lean over to the point that someone has to save you from falling onto the field, chances are you shouldn't be catching that ball. Maybe he's just realizing his mistake and identifying himself for security to escort him to his car. For me, I just wish all fans on the right field wall were like the guy in game 162 who took Dan Johnson's homer to the junk. That's how a man catches a home run!

I was counting on a Kids Sunday goldmine from years past to get me through the game on Sunday, April 8th, but alas, there was nothing. It's times like these where I really miss Kelly Shoppach and Johnny Damon. They were always a bit aloof in answering questions like, "What's your favorite kids cereal?" or, "What's one thing you couldn't live without?" Oh well, there's always next week. You can find some classic Kids Sunday lines by going to the "This Week In Sun Sports" tab on the right of the page.