Share All sharing options for: Catching Up With Rays Outfielder Matt Joyce

It is early May and the Rays are off to a tremendous start in 2012 so its only appropriate to spend a minute and check in on one of the big reasons why. Rays outfielder Matt Joyce is quietly having one helluva good season. Not only does he have an impressive .967OPS (173 OPS+) by hitting .286/.375/.592 but he has an ISO of .306 (tied for 6th in the AL), a wOBA of .413 (tied for 7th in AL), and a wRC+ of 171 (5th in AL) and these numbers are generated without a huge boost from our good friend BABIPPY which is only .313. He leads the Rays with 7 HR, his .967 OPS is second behind injured teammate Evan Longoria, and his .375 OBP places him 3rd behind Evan Longoria and Carlos Pena. He has been a versatile outfielder in 2012 starting 17 games in LF and 17 games in RF during absences of BJ Upton and Desmond Jennings.
Matt Joyce has earned the honorable nickname MOM which is an acronym for the "Month of May". The genesis of the name MOM is traced back to 2011 when he was clubbing nearly every pitch thrown his way (as Sandy Kazmir so eloquently put it Matt Joyce: Takes No Prisoners And Asks For No Quarter) on his way to posting an OPS of 1.229. He accomplished this by setting a club record for batting average in a month hitting .414 (36-87), posting an on-base percentage of .470, and thanks to 5 doubles, 2 triples, and 7 homers he ended up with a slugging percentage of .759. With a month like that it would have been easy to call him Mr.May but that doesn't seem appropriate in a month that celebrates Mothers Day - so the name MOM was born. 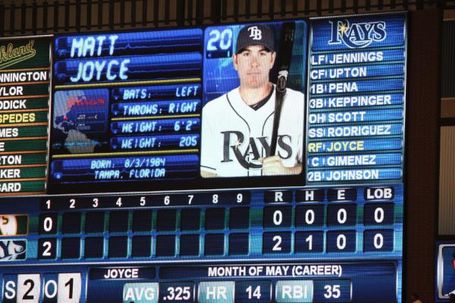 How good was his Month of May in 2011? It carried him to his first ever All-Star game and was the highest OPS ever by a member of the Devil Rays/Rays in team history (players with 70 or more PAs). 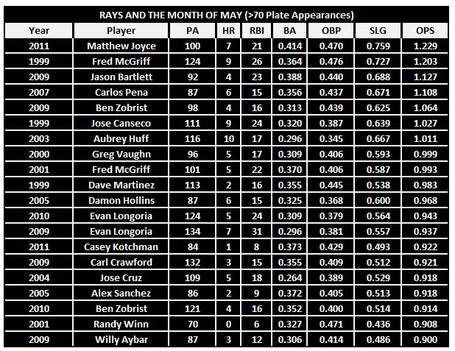 There are a lot of cliches to define when a hitter is locked in - statements like "able to lay off the pitches out of the zone", "able to waste a pitchers out pitch", and "looking for a pitch to drive and squaring up on it". In the numbers world we often use numbers to verify each of these statements (contact rate, line drive rate, etc).

For a more visual look at a hitter being locked in let's look at his plate appearance against David Robertson on Wednesday night.

Game Reset: Game tied 1-1 in the top of the ninth and the Rays have men at 1st and third with 2-out.

First Pitch: 82 mph curveball (slightly outside) called for strike one.

Second Pitch: 80 mph curveball on the outside corner called for strike two.

Third Pitch: 84 mph curveball spiked in at Joyce's feet that he takes for ball 1.

Fourth Pitch: 82 mph curveball again on the inside corner - Joyce waste the pith by fouling it off.

Fifth Pitch: The Money Shot - After 4 straight curveball's Robertson tries to sneak a 94 mph fastball past him but he turns on it and drives it out to right center for a 3-run homer and does a nice pirouette as the ball sailed out.

Last season Joyce got off to a hot start in April and had a scorching May before really cooling off in June and July. The table below shows his decline and in a story titled Is Matt Joyce Fine? a poll question was asked as to whether the decline was due to either regression, a sore shoulder, or a combination of both and 40% of DRB readers chose combination of both.

Joyce had a bounce back in August as shown in the table below from a story titled Matt Joyce Rebounds and the poll question as to whether or not this rebound raised expectations for him in 2012 and 81% of the respondents answered "yes".

Earlier this spring an article was written titled Matt Joyce: Sleeper or Bust and it detailed Scott White of CBSSports Fantasy Baseball opinion that Matt Joyce is a fantasy bust. Of course, this is in terms of Fantasy Baseball but his evaluation steps over to real world analysis but he presents his argument as if Joyce is closer to the June 1st to the end of the season .691 OPS guy.

BUST: Wait, this one is labeled wrong. Joyce was a long-awaited minor-leaguer who did nothing but live up to hype when he finally got to play regularly last year, even making the All-Star team. Surely he's more of a sleeper than a bust in waiting, right? Right? Sadly, no. Most of his production last year stemmed from an exceptionally hot May in which he hit .414 with seven homers and a 1.229 OPS. From June 1 to the end of September -- a full two-thirds of the season -- he hit only .226 with 10 homers and a .691 OPS. For the year, he hit only .217 against lefties, likely condemning him to a platoon role again. And because he's already 27 he has less room for improvement than you might think. Joyce's final numbers may look OK but he was by and large a disappointment last year. And if his struggles prevent him from getting full-time at-bats this year, he'll be a waste of a middle-round pick in Fantasy.

The question was asked of DRB readers if they thought that Matt Joyce would OPS over .800 this season and 76% of the responses were yes. Thus far in 2012 it appears as if Matt Joyce is heading for another possible appearance in the mid-summer classic.