Rays Hang On To Top The Orioles 9-8

Share All sharing options for: Rays Hang On To Top The Orioles 9-8

The upstart Orioles continued to pressure the Rays all the way up til the final out of the game as the Rays held on to a eke out a 9-8 victory. With the victory the Rays ended a three game losing streak and improved their record to 21-14 and they trail the Orioles by one game in the AL East. James Shields improved his record to 6-1 and Fernando Rodney earned his 10th save on the year.

The Rays built a 7-1 lead and James Shields was cruising along into the 7th inning but hit some turbulence with his command and was a victim of some poor defense behind him. Overall he worked 6.1 innings giving up 6R/4ER on seven hits while striking out six and walking two. The Orioles had cut the lead to 7-4 with three runs in the bottom of the sixth and knocked Shields out of the game with one out in the bottom of the seventh.

Shields left the game with two on and one out but both base runners should have been retired on a botched routine double play ball to Will Rhymes at second. Burke Badenhop came in and got a groundball back to the mound but J.J. Hardy beat the throw back to first to extend the inning for Nick Markakis who hit a two run double off Jake McGee to cut the score to 7-6.

The Rays knocked Orioles starter Jake Arrieta out of the game after 3.2 innings. He allowed 7R/7ER on 10 hits while striking out six and walking two. For the third game in a row the Orioles bullpen shut the Rays down until the top of the 8th inning when Elliot Johnson and Ben Zobrist hit back to back homers off Troy Patton. The homers extended the Rays lead to 9-6.

The Orioles still would not go away. In the bottom of the eighth Nick Johnson came to the plate to face Joel Peralta and once again Johnson homered to cut the lead to 9-7. The game moved into the bottom of the ninth and Fernando Rodney came in to close the door. He gave up a leadoff single to Ryan Flaherty before striking out Wilson Betemit for the first out. Sean Rodriguez made a diving stop on a sharply hit groundball off the bat of J.J. Hardy and from his knees he threw to second for the second out of the inning.

Rodney walked Nick Markakis to bring the wining run in Adam Jones to the plate. Jones hit a Baltimore chop off the dirt in front of home plate and Sean Rodriguez charged the ball and while sliding threw the ball to Carlos Pena who had it glance off the glove. The ball trickled down the right field line to score J.J Hardy to cut the lead to 9-8 and put runners at 2nd and 3rd for Matt Wieters who grounded out to Sean Rodriguez to secure the 9-8 victory. 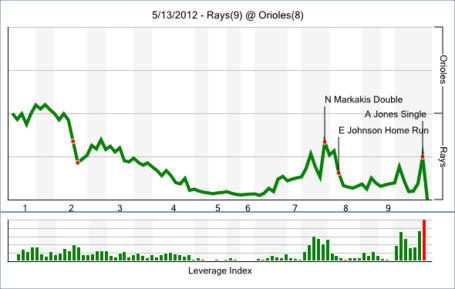 For the third game in a row the Rays scored first. Jeff Keppinger led of the top of the second inning with a leadoff single and Chris Gimenez drew a one out walk to put runners at 1st and 2nd for Elliot Johnson who delivered a single to score Jeff Keppinger and give the Rays a 1-0 lead. Ben Zobrist followed with a 2-run double over Adam Jones head in centerfield to extend the Rays lead to 3-0.

The Orioles Strike Back Cut Lead To 3-1

Matt Wieters led off the bottom of the second inning with a double over the head of Matt Joyce who initially broke in on the ball. Nick Johnson did his job and rolled over on a ball grounding out to second but moving Wieters to 3rd with 1-out. Chris Davis hit a grounder against the shift for an RBI infield hit to cut the Rays lead to 3-1.

Rays Answer the Orioles And Extend Lead To 4-1

With 1-out Carlos Pena lined a double to right field, advanced to third on a Jeff Keppinger ground out, and scored on a Will Rhymes single.

Elliot Johnson led off with a bunt single and Ben Zobrist followed with an infield hit to put runners at 1st and 2nd with nobody out but Arrieta struck out BJ Upton for the first out. The Rays then pulled a double steal with Matt Joyce at the plate and he delivered an RBI single to right. A few pitches later Matt Joyce moved up to second on a ball in the dirt which was ruled a wild pitch. Arrieta struck out Luke Scott for the second out but Carlos Pena delivered a 2-out double scoring both Zobrist and Joyce to give the Rays a 7-1 lead.

With 1-out in the sixth inning J.J. Hardy and Nick Markakis delivered back to back doubles to cut the Rays lead to 7-2. Matt Wieters hit a 2-out two run homer to cut the lead to 7-4.

Robert Andino led off the bottom of the seventh inning with a single and should have been erased on a routine double play ball off the bat of Ryan Flaherty.. Unfortunately, Will Rhymes threw the ball wildly to Elliot Johnson who was unable to stay on the bag and both Andino and Flaherty were safe. Shields came back to strike out Xavier Avery for his last batter of the game. Burke Badenhop came in to face J.J. Hardy and got him to ground back to the mound but was only able to get the force out at 2nd to put runners at the corners with two out. Jake McGee came in to face Nick Markakis who lined a double to deep centerfield. to plate Andino and Hardy to cut the Rays lead to one at 7-6. McGee was able to strike out Adam Jones to end the inning.

The Orioles bullpen had retired 30 of 31 hitters in the series when Elliot Johnson stepped to the plate. Additionally, the Orioles had scored five unanswered runs to cut the 7-1 lead to 7-6. The "momentum" monster was tilting toward the Orioles until Elliot Johnson stepped to the plate and hit a solo homer off Troy Patton. Ben Zobrist followed Johnson's homer with one of his own to extend the Rays lead to 9-6.

Nick Johnson led off the bottom of the eighth and tattooed another homer off Joel Peralta. This time it was only a solo homer and the Rays maintained a 2-run lead at 9-7. 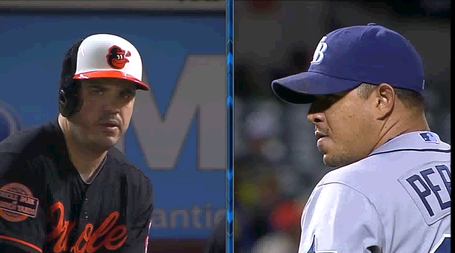 Fernando Rodney gave up a leadoff single to Ryan Flaherty before striking out Wilson Betemit for the first out and J.J. Hardy grounded into a fielders choice for the second out but the Orioles kept fighting. Nick Markakis walked to bring the wining run in Adam Jones who hit a Baltimore chop off the dirt in front of home plate. Sean Rodriguez charged the ball and while sliding side-armed the ball to Carlos Pena who had it glance off the glove and trickle down the right field line to score J.J Hardy to cut the lead to 9-8. With the wining run at second Matt Wieters grounded out to Sean Rodriguez to end the game.

Missed Opportunities: Normally missed opportunities aren't a big deal when the offense scores 9 runs but the Orioles kept coming back so let's take a look at the opportunities lost.

First Inning: The Rays had Ben Zobrist at 3rd and Matt Joyce at 1st with one out in the first inning but Jake Arrieta struck out Luke Scott and Carlos Pena to end the inning.

Second Inning: Ben Zobrist knocked in two runs with a one out double but BJ Upton struck out and Matt Joyce popped to center to strand Zobrist at 2nd.

Third Inning: After driving in a run with an RBI single Will Rhymes stole second base to get into scoring position but was left stranded as Chris Gimenez flew out to center.

Fourth Inning: After driving in two runs with a double Carlos Pena was left stranded after Jeff Keppinger grounded back to Kevin Gregg.

Fifth Inning: Will Rhymes moved to second base with two outs on a groundout by Chris Gimenez but Ben Zobrist grounded out to second to end the inning.

Eighth Inning: B.J. Upton moved up to second base with one out by beating the throw from the first baseman on a pickoff attempt but Matt Joyce struck out swinging and Luke Scott flew out to center to end the inning.