The Rays lost both series they played this week in finishing the week with a 2-4 record and currently are one game behind the Baltimore Orioles in the AL East with a record of 21-14. The loss of Desmond Jennings on top of the absence of Evan Longoria has certainly had a negative impact on the teams ability to score although they have certainly had their opportunities to score but until Sunday's game have really failed to capitalize. After the errors on Saturday evening Joe Maddon said what can be best applied to the way the Rays have played over the last week plus of games:

This is the first segment of the 2012 Interleague schedule and each team will play a weekend series. Below are the matchups for next weekend.

The Rays will travel to Toronto for two games to finish off the current eight game road trip before returning to Tropicana Field to take on the Boston Red Sox for two and the Atlanta Braves for three.

The Baltimore Orioles host the New York Yankees for two games then travel to Kansas City to take on the Royals for two games and continue on the road for a weekend series with the Nationals.

The New York Yankees will travel to Baltimore to take on the Orioles for two games before heading to Toronto for a two game series with the Blue Jays then head home for a weekend series with the Reds.

The Red Sox will host the Seattle Mariners for two games before travelling to St. Petersburg for two games against the Rays and then on to Philadelphia for a weekend series with the Phillies.

May 9, 2012 - Placed IF Jeff Keppinger on the restricted list and recalled outfielder Brandon Guyer.

May 10, 2012 - Activated Jeff Keppinger from the restricted list and placed OF/1b/DH Brandon Allen on the 15-day disabled list.

Hideki Matsui has completed his time in extended spring training and he will join the club on the upcoming trip to Toronto to get his travelling visa paperwork completed. He may be able to report to Durham either Tuesday or Wednesday. The Rays have said that the trip to Durham is not on a timetable of any kind.

What Does SF1 Have To Say:

This week saw our Rays take it on the chin in two road series versus ALE foes in New York and Baltimore, knocking us out of first place.

The Cap'n Obvious in me is we're not scoring runs, but why not? In most of these games the opportunities to score are there, but the old GTMI isn't. Yesterday finally saw the bats come alive and we scored nine runs, seven without the aid of the HR which was great to see.

If Desmond Jennings goes on the DL our line up really becomes weak versus LHP and that could pose a problem. Hurry back DJ and Longo.

The late inning HR allowed by the pen in four of these games has also been very discouraging and hopefully that ends.

It's off to Toronto and then home to the surging Bosox, before the first inter-league games versus Atlanta

Let's stay healthy and as always

James Shields needed 109 pitches to get through 6 innings and he took his first loss on the year going 6 innings and allowing 3 runs against the Yankees who added single tallies against Burke Badenhop and Jake McGee on their way to a 5-3 victory.

James Shields on his outing and how the Yankees approached him:

"I was getting ahead of hitters early, and then they were just working the counts," Shields said. "They had some pretty good at-bats, for the most part." - mlb.com

The Rays received solo home runs from Jose Molina (2nd) and Luke Scott (7th). The Rays loaded the bases for Carlos Pena in the bottom of the ninth but the bat never left his shoulders as he struck out to end the game. Can we really blame Carlos for this one? 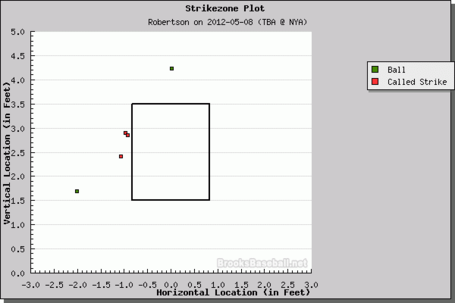 Wednesday, May 9th: Rays Comeback In 9th To Defeat Yankees....Again

Jeff Niemann worked 7 full innings and gave up his only run of the night in the first. The Yankees held a 1-0 lead in the ninth but the Rays loaded the bases with nobody out. David Robertson for the second night in a row retired Carlos Pena looking but BJ Upton delivered a sacrifice fly to tie the game at 1. Matt Joyce followed with 3-run homer to give the Rays the 4-1 lead. Fernando Rodney who replaced Jeff Nieman worked the ninth to earn the win.

"It's always great to come up with a big hit like that, especially against the Yankees," Joyce said. "And it's just hard to celebrate when you're lying on the ground after you rolled your ankle." -mlb.com

Joe Maddon on David Robertson and the role of the closer specifically the ninth inning:

"He's got great stuff, and he's very good at what he does," Maddon said. "I think he threw 25 or 26 pitches [on Tuesday] night, and it may have spilled over into tonight a little bit.

David Price gave up a solo homer to Curtis Granderson and a 2-run shot to Robinson Cano as the Yankees defeated the Rays 5-3 to take the series.

"[The pitch to Granderson] was a good fastball down and in," Price said. "I'd throw that pitch again. He put a good swing on it and hit it well.

"[The pitch to Cano was] just a slider -- it was in the middle of the plate, just a bad pitch. He put a charge in that one as well." - mlb.com

"They're not your run-of-the-mill lefties," Maddon said. "Cano hits lefties well. Granderson's gotten a lot better against lefties over the last couple of years. They both struck those balls well. They beat us with the homer. That's who they are, and that's how we lost." - mlb.com

Jeremy Hellickson rebounded from his 3.2 inning performance versus the A's with 6.2 innings of outstanding pitching departing the game with a man on first and 2-out and Nick Johnson due up. Johnson worked the count full on Joel Peralta and laced a homer to give the Orioles a 4-3 lead. The Orioles bullpen retired the final 9 Rays hitters in just 16 pitches.

Nick Johnson on the homer:

Joel Peralta on surrendering the homer:

"What hurts the most is after a guy like Hellickson battles for almost seven innings ... and you're over there, one batter, you blew it," Peralta said. "That's what hurt the most."- mlb.com

Saturday, May 12:Sloppy play costs Rays as Orioles win 5-3 The Orioles and Rays combined for 7 errors on Saturday night - unfortunately 4 of the errors were committed by the Rays which led to 3 unearned runs off a shaky Matt Moore. Moore was unable to complete 5 inning but Wade Davis and Burke Badenhop worked 2.2 scoreless innings and the Rays fought back to make it a 4-3 game but Bill Hall delivered a solo homer off JP Howell in the eighth to give the Orioles an insurance run. Like Friday night the Orioles bullpen retired the last 10 Rays in a row.

Matt Moore show maturity by blaming himself and not the defense for the results Saturday:

"Absolutely [the errors hurt]," Moore said. "I threw the ball away there to [Jeff Keppinger] to try and [get the] pick. But the defense can't defend walks and 2-0 counts and getting into those situations where I really have to make a good pitch. They can't defend walks, so there's really nothing to say about the errors." - mlb.com

Sunday, May 13th: Rays avoid the sweep and defeat the Orioles 9-7

The Rays jumped out to a 7-1 lead and held on as the upstart Orioles pressured the Rays up until the last out of the game. James Shields earned his 6th win on the year, Elliot Johnson and Ben Zobrist hit key home runs in the 8th inning, and Sean Rodriguez made some tremendous plays in the 9th inning.

"Good team, good team," Shields said. "They've always been a team that's been able to hit the ball. They've always had those good hitters. And now they've got the pitching. Their bullpen is phenomenal this year. And their starting pitching is going deep into the game. That's one of the recipes we've figured out the last couple of years. You have to have pitching and defense to win ballgames." - mlb.com