Rays Defeat Jays: Pitching, Defense, and a Soon to be Suspended Third Baseman

Share All sharing options for: Rays Defeat Jays: Pitching, Defense, and a Soon to be Suspended Third Baseman

This game was dominated by defense, both good and bad, and by pitching. The pitching was pretty fantastic all the way around, although it became apparent as the game wore on that David Price was simply better than Henderson Alvarez – which of course is supposed to happen when a true ace and Cy Young award contender goes up against a 22 year old with minimal time in the majors and no time in AAA.

Don’t take this as a knock on Alvarez. The kid has a fantastic sinking fastball that sits in the mid 90s and a slider that should be good enough to get out major league hitters if they’re sitting fastball. I’m less sold on his changeup, which has disturbingly little velocity separation from the fastball. He’s a pitcher I’ll look forward to seeing in the future, but for the life of me, I don’t know why he’s in the majors right now (and as he’s striking out less than three batters per nine innings I’d be surprised if he stays up much longer). Nevertheless, he nearly stole one from Price and the Rays tonight.

In the top of the first inning, after Zobrist put together a good at bat but flew out to left field, BJ knocked a foul ball towards the first row of seats near first base. Edwin Encarnacion, not known for his defensive prowess, got over, found the wall, and dove into the stands to make a nice play. It made me wonder about park adjustments that call The Trop a pitcher’s park though, as there are no former NBA centers to contend with at the Rogers Center.
One batter later, Joyce bunted against the shift, and Alvarez, trying to make an utterly hopeless but heroic play (seriously, send the poor guy to AAA), sailed an off-balance throw nearly right back into the stands, allowing Joyce to go to second, and bringing the Jays to one good defensive play and one bad defensive play (Jays: 1, 1; Rays: 0, 0).

In the bottom of the inning, Price came out pumping fastballs to Kelly Johnson, who eventually singled. I immediately started to worry – not because of anything about Price’s pitches, but because of how he looked. He was really uncomfortable, constantly wiping his eyes between pitches, squinting, grimacing, and taking huge breaths. I don’t know what it was (Contact lens problems? Allergies? Sickness?), but something was wrong.
After Johnson’s single, Yunel Escobar hit a liner into short right field. Zobrist charged, but wasn’t quite able to get there. It was close enough that Johnson had stayed in the middle, and Zobrist was able to beat him to second with his throw for the force out. It was a tremendous heads up play on Zobrist’s part (Jays: 1, 1; Rays: 1, 0). Price easily handled Jose Bautista and Encarnacion, and then walked off the field still rubbing his eyes.

Bullets, continued tallying of defensive plays, and a fun ejection below the jump. 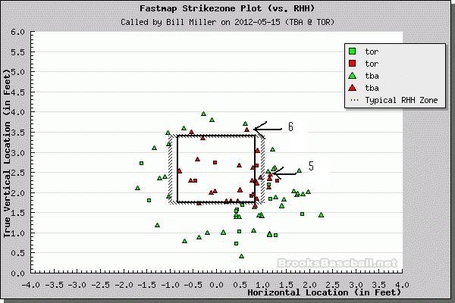 Pitch #5 was a fastball, pitch #6 was a changeup. Probably both of them should have been called balls (I think five was a ball, and six was a strike), but keep in mind that Rodney's fastball has great run which would take it into the strikezone, and his changeup has great sink that would also take it into the zone. And keep in mind that Jose Molina is a pitch framing master.

After each pitch, Lawrie thought he had drawn a walk and sprinted a third of the way up the line to first base before being called back. When he was called out, he completely lost his cool, throwing his helmet into the ground so that it bounced into the ump and then getting into the umps face before being tossed and restrained by his manager (who was soon also tossed). Similar to the Cody Ross at bat against Rodney, Lawrie has a case. Those pitches might have been balls (although the Jays got a call even further off the plate). Also, similar to the Cody Ross at bat, Lawrie has no one to blame but himself, for (a) not recognizing Rodney's excellent movement and (b) sprinting up the line before the ball was made in such a way as to draw the umps ire.