Before last night's three hit performance he was hitting .219, which isn't good. But, he was also getting on base at a .370+ clip which is good. I was watching a game with a friend late last week when he was hitting under .200. I said he was still hitting well. My friend disagreed, refusing to give into the notion that someone hitting below .200 could be having a good season at the plate. The numbers have improved a bit since then - he's over .230 now - but the average still isn't "good". I took a look at Zobrist's total hits and hit types from last season and this season and compared the percentages.

The distribution of hits have shifted a bit as 16 percent less are going for singles, but the hits he is getting are going for extra bases as evidenced by his .266 Isolated Slugging Percentage (SLG% minus AVG). The low average is being buoyed by the extra bases he's racking up. One reason for the low average is his numbers against left handed pitching. So far this season he has a line of just .140/.283/.372 in 53 plate appearances against southpaws. Contrast that to last season when he had a .907 OPS and .390 weighted on base average (wOBA) against them. As a left handed batter he's hitting .284/.437/.568 with a .427 wOBA in 103 PAs. Historically he's been a better hitter from the right side of the plate, posting a higher career averages across the board. Obviously this year has been quite the opposite as a .138 batting average on balls in play against lefties has dragged him down. His line drive rate is four percent higher against lefties but is hitting it on the ground less which is resulting in more fly outs, specifically infield fly balls where he's hitting five percent more as a right handed batter. Zobrist is a notorious pull hitter and looking at the spray chart below we can see how many outs he's already made to the left side of the field as compared to the right in half the plate appearances. 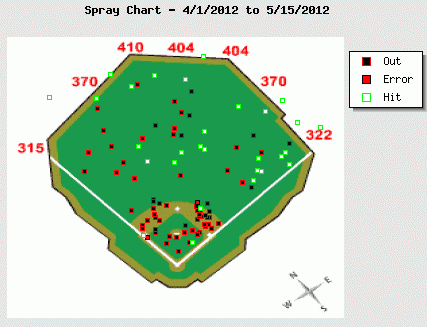 Despite his low average and terrible luck against lefties Zobrist is second in baseball in walks (30) and continues to be an important cog in the Rays machine and among the most valuable players in baseball, even if he doesn't do it in the most traditional of ways.