Share All sharing options for: Doing More With Less

Last night, Will Rhymes was plunked on the arm with a fastball from Franklin Morales that had a rather sickening sound to it. The way 2012 has gone so far for the Rays, it would not have been unreasonable to expect Rhymes to have a broken bone in his forearm especially after he fainted trying to walk off the field. Thankfully, he just has a very nasty bruise and apparently has forearms made of titanium. So far, it appears he will avoid becoming the tenth Rays player to hit the disabled list in 2012. The Rays are certainly not enjoying the kind of health fortunes that they did in 2011. 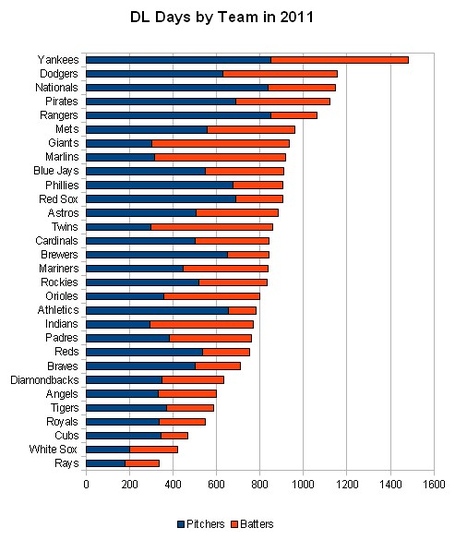 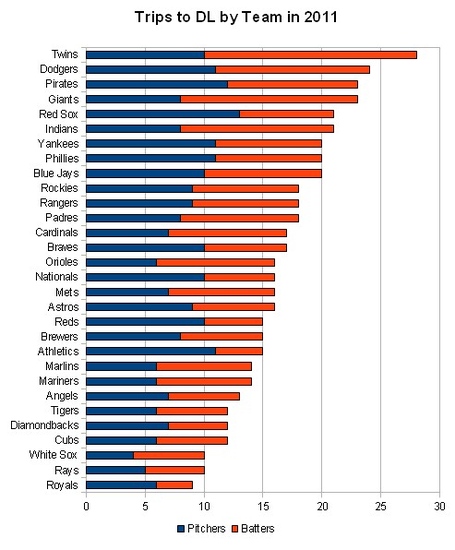 The Red Sox have been the most victimized with 16.6 WARP on the DL with Jacoby Ellsbury and Carl Crawford leading the charge. The Rays are second with 14.5 WARP on the shelf followed by the Yankees at 9.3, the Orioles at an even 7.0, and the Jays with just 2.4 WARP on the disabled list.

Misery does indeed love company and the fact that the Rays' two biggest competitors to start the season have not been able to take advantage of the Rays' woes because they are too busy dealing with their own. The Orioles and Blue Jays have been able to avoid serious injuries to their key players so far which has helped them stay this competitive in the American League East to date.

Nine players on the disabled list and yet the Rays start the day tied with the Rangers and Orioles for the best record in the American League and just a half game behind the Dodgers for the best record in all of baseball. The Orioles have been the big story with their success fueled by a league-leading 60 team home runs yet the Rays are only six runs behind the Fightin' Showalters in the runs scored department.

The slogan for 2012 was supposed to be Morementum as the Rays built upon the success of 2011 but it appears that 2011's slogan, "Find Another Way," needs to be extended into 2012 as it accurately describes what this rag tag bunch of hitters is doing in the absence of two of its stars.