Share All sharing options for: This Week in Sun Sports: "O" Face Edition

Welcome back to This Week in Sun Sports, kids. As always, we'll be looking at the oddities of the Rays broadcasts from this past week. Anything from the announcing, to a crazy video segment, to the fans in the stands. If it's on Sun Sports, we see it. Because--like the Eye of Sauron--we're always watching.

This week covers Monday, May 14th - Sunday, May 20th. If you missed last week's, you can find it here.

I was shocked--SHOCKED, I say--by the reader submissions this week. Y'all went the extra distance this week, even if some were a little blue for our young, impressionable readers. It's OK though. Any submission is a good submission (except yours, you know who you are).

We begin with a tip from the keen eyes of DRB utility-contributor FreeZorilla who spotted this in the fifth inning: 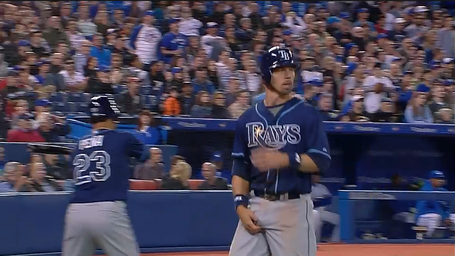 Just the tip we needed to get things started.

Clearly, "Baseball player grabs junk" isn't breaking news, but I find it interesting that FreeZo was the only one who caught this. I know we all have our favorite players, but I think it's significant that FreeZorilla called out Ben Zobrist "Freeing Zorilla" after he scored. I'd like to think that only FreeZo's mind was in the gutter on this scoring play, but Brian Anderson bailed him out when discussing the events in the next inning:

[Talking about Brandon Morrow] If you wanna be mad, be mad about the fact that you walked BJ, you know, with two outs, and then you start to complain about the call and allow Ben Zobrist a little back door action there.

And that completes the trifecta! Anyone who had BJ, "Backdoor action," and a crotch grab, please bring up your tickets. (h/t to the GDT for catching this.)

A new 'Face,' a face plant, and another edition of "What could he possibly be saying?" after the jump...

Once again, it's time for "What could he possibly be saying?" After J.P. Howell got out of the seventh inning he seemed to be saying something to himself: (h/t again for the GDT. Y'all were really on the ball this game)

"That's trucking freight, you ducking goosey! Torah juicy! Muck, too!" is the answer, if you were wondering.

Next, we have heads up from Joey Walker who alerted us to this next event via electronic mail: 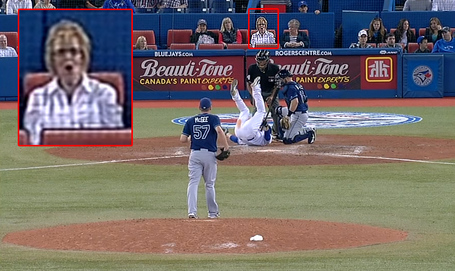 In the ninth inning, Kelly Johnson fouled a ball off his face and went to the ground. It was a glancing blow, and he'd be fine, but this lady behind the plate assumed the worse. She held this "O" face for a good five seconds. If you don't think that's a long time, try holding an "O" Face for five seconds. It's longer than you think , right? Also, it's better to do this in public, like at work, on a bus, or at a playground. So if you're reading this on your phone or other mobile device, definitely go try that.

I wasn't sure about this one when I capped it because of the size and quality, but then I got to staring at it. She really draws you in. Like a Munch painting. I enhanced the image on the left so you can see that this is not actually a woman, but a Zombie David Bowie. In unrelated news, Labyrinth is the creepiest movie ever made.

In the bottom of the second inning, Luke Scott was hit by a pitch on his foot. It didn't look to be that severe, but he played it like it was. Dewayne and BA thought it to be quite the Caddyshack moment:

BA: That was the Rodney Dangerfield right there. Like, "Ow, my foot, I think it's broken."

DS: If that's the case I can't wait to see his outfit when he leaves the park tonight.

BA: Free bowl of soup with it.

DS: That hat will look good. [Dangerfield voice attempt] It looks good on you.

I'll give Staats some credit for attempting the Dangerfield voice, but award nothing for the execution. It was a pretty horrible effort. What can I say, the guy just don't get no respect.

At the end of the inning, this kid entered my nightmares: 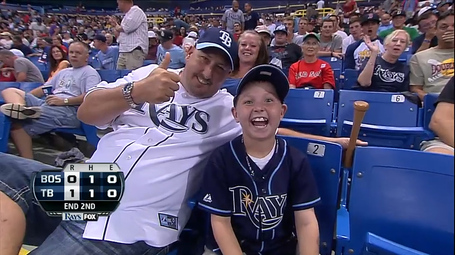 He's clearly excited to be at the Trop. Though maybe not as much as the Red Sox fan giving us our second "O" Face in the top right. Back to the kid and his dad, I wonder where the rest of the family is: 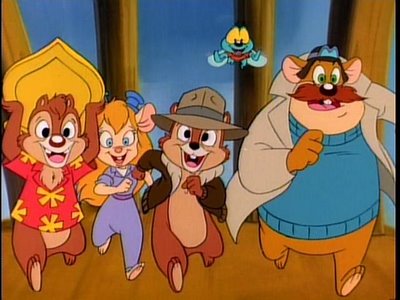 In the top of the third inning, we were introduced to J.A. Happface: 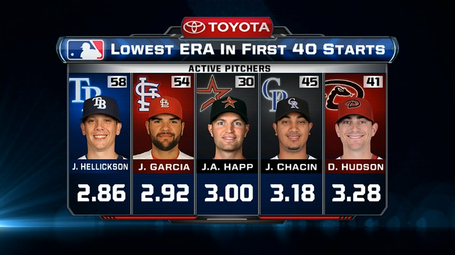 BA had some keen insight on the graphic:

I can't get over to Jeremy Hellickson, I can't get away from the eyes of J.A. Happ. I'm mesmerized.

Later in the inning, when BA was asked if remembered a previous encounter with newly acquired Rays OF Rich Thompson, he replied:

Someone should go tell J.A. Happ that he has a little Brian Anderson stuck on his face. No way that could be misconstrued.

In the top of the fourth, we were, once again, treated to some overaggressive fan-play. Here's the pic courtesy of Jason Collette: 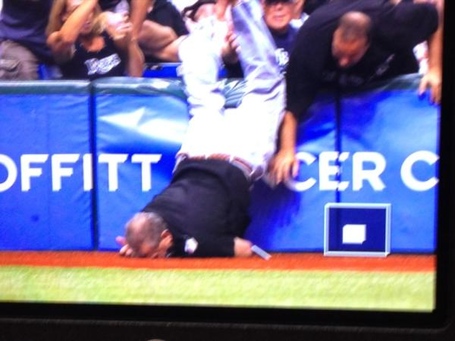 And here's a gif because, you know, why not? (Low quality, I know, but trying to save y'all some loading time.)

Check out his wife's face as he falls. You'd think he was going off a cliff. Also, I love how he gives the "I got the ball" wave like he made a great snag in the stands. Really, you made the catch, fan who's now on the field? Bet that other guy feels like an idiot because he didn't face plant on some Astroturf to get a leather-bound ball of string. Luckily, this player-fan was not ejected for some reason, and his wife didn't have to go into mourning.

It was a great day for Rich Thompson who recorded his first Big League hit and RBI at the tender age of 33. They, of course, saved the ball for him. In the fourth inning, he also stole his first base as a Ray. Apparently David Price felt he should take that to: 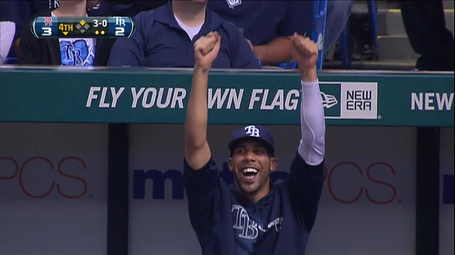 What a kid. Just has fun out there. Just like Brett Favre.

Before the game, Joe Maddon gave some of his thoughts about Chipper Jones. This was apparently boring to one reporter, who appears to be taking a nap: 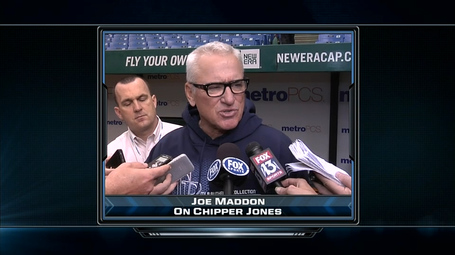 Seriously, can we have some professionalism, people?

Later in the game, the rightfield foul-ball-boy was caught giving absolutely zero ducks about this toss to the stands:

"OK, OK. Who wants the ball? You? Nah. You? Whatever. Oh, how abouts you pretty girl? You want a ball? OK, here you go. What, you didn't catch it? It only fell three feet in front of you. Whatever, not my problem. At least I'm wearing a helmet."

Before the game, we caught up with that reporter again: 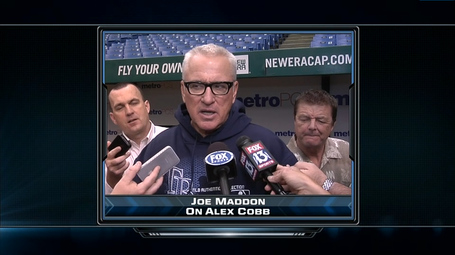 This time he appears to be in some sort of Hari Krishna chant. Dude, seriously, Joe Maddon is trying to talk. Of course, I am having a bit of selective screencapping fun on this intrepid reporter who is none other than DRaysBay Manager and Podcast host, Jason Collette. (I know: NO REAL FACES!) You're like the angel on Joe Maddon's shoulder, Cason, a drunk-looking, words-with-friends-playing angel.

In the top of the second, Jason Heyward hit a grounder through the shift and BA did some nifty drawing on the replay. Commenter pudieron89 seemed to think this resembled something important, but for the life of me, I can''t remember what:

In the bottom of the third, we saw this sign: 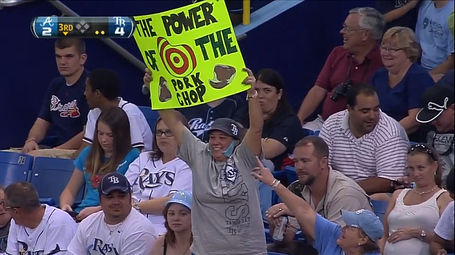 OK, why is that lady in blue touching the other lady's armpit? Look at blue lady's expression, it looks like an "Oh dear God" Face: "She's not wearing deodorant!"

Have you ever seen a player hit a homer that was foul? Well that happened in the fifth inning:

If you look closely, you can see the ball hit off a mascot in foul territory. That's the Braves mascot "Homer" who has a oversized baseball for a head. What are the chances of that happening? It's like Randy Johnson exploding that bird. This seems like the answer to a riddle or something. "How can you hit a homer and it be a foul ball?" The answer: "The doctor was HIS MOTHER!"

It was a Sabermetric Sunday on Sun Sports and Super Sam Fuld was in the booth, red bow tie and all: 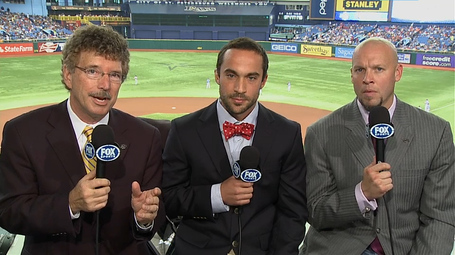 Makes me think of this: 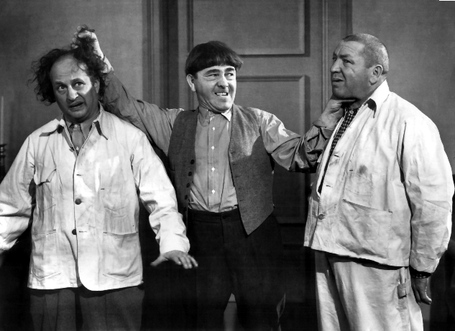 "Why I oughta... teach you about sabermetrics."

We finish this week in the fifth inning with another error by a foul-ball boy, this time the leftfielder. He let a ball get through and into the Braves bullpen. They were none too pleased, especially Livan Hernendez:

Holy crap, I finally get it! That's why they wear the helmet!

I had to look it up just to make sure that was Livan. It's nice to see him making productive pitches again, even if it is just sunflower seeds.