Rays Are Trending Up

Share All sharing options for: Rays Are Trending Up

While the attendance at Tropicana Field has been all over the map this season, the television ratings are a different story. Maury Brown of The Biz of Baseball and Baseball Prospectus reports that the Rays' television ratings this past April were up 51% from April 2011. 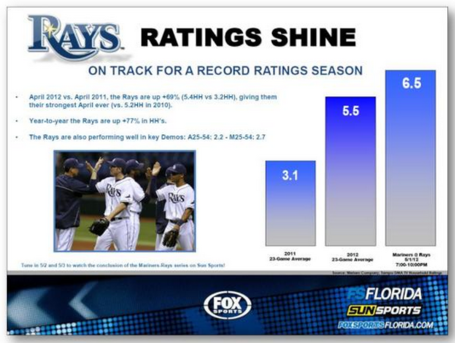 The local ratings in April 2012 were 5.3 with 95,000 households tuned into watch the Rays. The 51 percent spike this year looks fantastic against the backdrop of a 34 percent decline when comparing the Aprils of the previous two seasons. Last season, the team's local ratings were just 3.5.

The attendance through the first 13 games this season currently sits at 261,443 which 42,834 fans ahead of last season's total through 13 games. That represents a 20 percent increase from last season.

Lastly, the Rays were 16-13 on this date last season, but in second place two games behind the Boston Red Sox. Today, they are a league-best 18-8 and have a 1.5 game lead over the Baltimore Orioles.

All in all, a great start to the season all of the way around despite who is not on the roster or the stands at times.