A Second Opinion On Sean Rodriguez vs. Velocity: He's Not Dead Yet

Share All sharing options for: A Second Opinion On Sean Rodriguez vs. Velocity: He's Not Dead Yet

One week ago, mr. maniac had some very interesting observations about Sean Rodriguez and his performance against fastballs of different velocities. The following is a graph he produced: 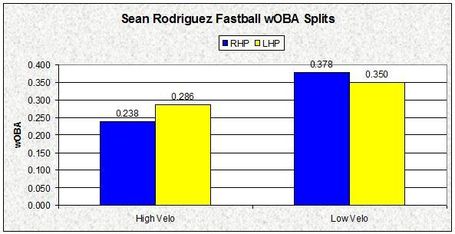 I found this graph both surprising and thought provoking. It looks like Rodriguez is better against low-velocity righties than he is against high-velocity lefties. As I considered mr. maniac's findings more though, I realized that I didn't especially know how to interpret his numbers. Mr. maniac had ignored the majority of pitches in the at bat, and looked only at decisive fastballs -- fastballs that were put in play or lead directly to a walk. Now, I'm not saying that there's anything wrong with this; I'm just saying that I have absolutely no idea what league average is, what good numbers look like, and what bad numbers look like.

Because of this, I decided to recreate mr. maniac's study for myself using a different methodology.

Rather than look at decisive fastballs and bucket them by velocity on a per-pitch basis, I looked at whole plate appearances in 2011 and bucketed them by average velocity of the pitchers (I used BIS numbers, as they call all fastball types the same thing, giving me one number to work with and less choices to make). I separated pitchers by handedness and by whether they had below or above average velocity. Average was around 91.1 mph. Then, just for fun, I also made a separate group of pitchers who showed velocity more than one standard deviation above the average, which came out to 94 mph. (There were only 13 lefties in this group, and three of them are Rays).

Here is what I came up with for league-wide wOBA baselines in 2011: 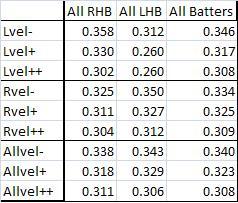 As you can see, it's better to have velocity. Regardless of handedness, batters were better against below average velocity than they were against above average velocity, and they were worst of all against the hardest throwing pitchers. Nothing surprising here, but good to keep in mind when looking at individual players.

How about Sean Rodriguez? 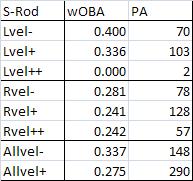 The first thing that jumps out to me is that these numbers are way different than mr. maniac's numbers, and way closer to what I expected to see. S-Rod hit low velocity lefties very well, and hit high velocity lefties at an above league average rate, while hitting poorly against righties of all velocity.

Frankly, the fact that the two methodologies gave so completely different results is the most interesting thing I've seen so far. I really expected them to be similar, as inability to hit the good fastball (as shown by rarely squaring it up on a per-pitch basis) seems like it should translate to inability to hit pitchers with a good fastballs. Ideas as to why it doesn't (at least in this case) are welcome.

How about some other Rays players? 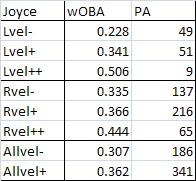 Here are the rest of the Rays (and former Rays) in no particular order. Feel free to either scrutinize them closely or skip down to the bottom for my conclusion. 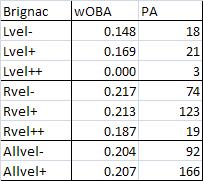 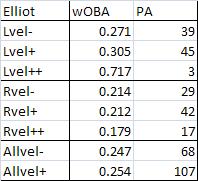 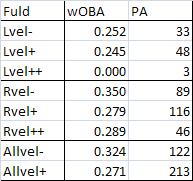 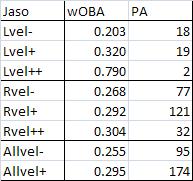 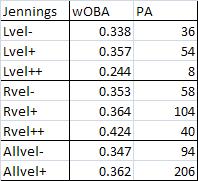 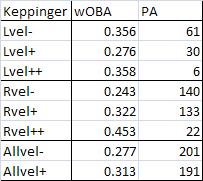 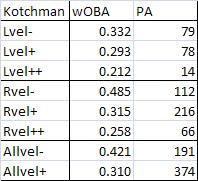 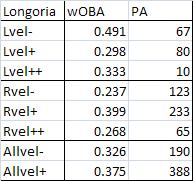 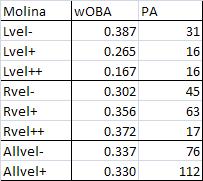 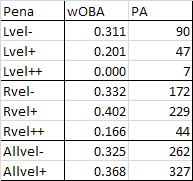 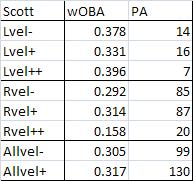 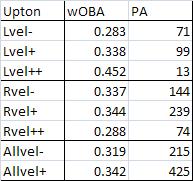 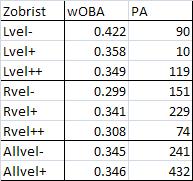 Well, first off, astute readers will have noticed that this is a particular order. It's alphabetical. After that, I'm not sure that there's much to notice. It's tough to say, after putting so much time into a spreadsheet, but I'm just not convinced that one season's worth of PAs is enough to get any good sense of a player's talent at hitting pitchers with fast or slow fastballs. S-Rod, the very first player I looked at, was also pretty much the only one who performed as one would expect, going by the (unsurprising) league averages. I'd love to regress these numbers, but I don't really know how much, yet.

This seams like a non-answer, but I don't think it is. Mr. maniac's method gives a higher sample size per player, so it might very well be better, though I can't say for sure. Another idea would be to perform this same study but to look at things like contact rate, walk rate, and strikeout rate, which stabilize way more quickly than wOBA. For me, that's the logical next step.

If anyone wants to take a crack at the data themselves, here it is: Batter Velos . This is not a tidy spreadsheet, but have at. Also, there's a systematic error somewhere in it throwing wOBAs against all batters off by a few points compared to wOBAs calculated as a combination of the two handednesses of batters. It's small and uniform enough that I still have confidence in the data, but large enough that I find it annoying. Data is from a combination of Fangraphs, Baseball Prospectus, and Baseball Reference.