The Rays finished the week with 2 losses in a row to the Oakland A's but finished the week with a record of 5-2 and are now 19-10 on the season. The Rays have won 13 out of 16 at Tropicana Field but will take the show on the road for the next 8 games but first they will have a much needed off day today. The Rays are happy to have an off day as Sunday's game with the A's marked the end of a grueling 26 games in 27 days stretch. The Rays need to enjoy their rest as Monday's off day is the only day off for the club in a stretch of 30 games between April 24 and May 23rd and Tuesday game begins a 16 games in 16 days.

The Rays did receive a dose of bad news during the week with the injury to Evan Longoria. When you walk into Tropicana Field you are greeted by a smiling face that hands you a copy of Rays Inside Pitch which is a fans guide to the Rays and Tropicana Field. It includes little facts about the players, reflections of game 162 including Erik Hahmann's date night, and the team roster and notes. Right on the front page of the guide is a picture of Evan Longoria with the caption "Loose and Ready" in script and the caption "Evan Longoria is back at full strength and ready to start the 2012 season with a bang." Well he did start the year off with a bang but on Monday night the full strength part fell apart and he injured his hamstring running the bases and will be on the shelf for 6-8 weeks.

The Rays also announced the former first round pick Tim Beckham was suspended for 50 games for failing a drug test. Beckham's response:

"I regret that my poor judgment resulted in me letting my teammates and the Tampa Bay Rays organization down," Beckham said in a statement released by the Rays. "I take full responsibility for my actions and I will use this experience to refocus my commitment to baseball. I recognize that I am blessed to be able to play baseball for a living. I owe it to my teammates, my family, and to myself to respect the game and the responsibilities that go with playing it as a professional. I am sorry." - mlb.com

The Rays will head out on the road for a 3-city 8 game road trip which includes 3 games against the Yankees, 3 against the Orioles, and 2 against the Blue Jays.

The New York Yankees will host the Rays for 3 and the Seattle Mariners for 3.

The Boston Red Sox will travel to Kansas City for 3 against the Royals before returning home to take on the Cleveland Indians for 4.

The Baltimore Orioles will host the Texas Rangers for 4 games and then 3 against the Rays.

The Toronto Blue Jays will play two games in Oakland against the Athletics before heading to Minnesota for a 4 game series.

Evan Longoria placed on 15-day disabled list with a torn hamstring. Will Rhymes recalled from Durham.

Kyle Farnsworth transferred from the 15-day to 60-day disabled list.

Hideki Matsui signed to a minor league contract. He is currently working out in Port Charlotte.

The Rays have released a full-color "Players and Pooches" calendar featuring Joe Maddon, Rays players and their dogs. The calendar can be picked up at the Pet Pal Animal Shelter (405 22nd St. S) and Pet Pal Veterinary Clinic (1900 24 St. N) as well the Rays Team Store at Tropican Field, the Rays Por Shop and Sales office in Tampa. THe Calendar cost $15 and all proceeds from the sales will go to Pet Pal Animal Shelter, a no-kill, non-profit organization committed to rescuing dogs and cats from animal shelters that may otherwise be uthanizeed due to limitations or lack of socialization or training. No word if this will be available on-line as of yet. 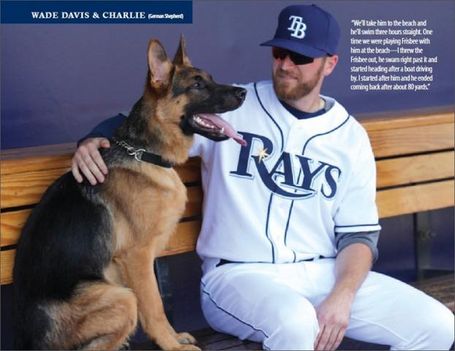 The Rays are off Monday night and the Charlotte Stone Crabs will be playing the Clearwater Threshers at 7:00 at Brighthouse Field. Brighthouse Field is located at the intersection of US Hwy 19 and Drew Street in Clearwater, Florida (Directions Here). Wilking Rodriguez is scheduled to toe the rubber for the Charlotte Stone Crabs and fellow DRB writer John Gregg and myself should be in attendance and look forward to meeting up with any who may brave the rush hour traffic to make the game.

What does SF1 have to say:

This week saw our Rays go 5-2 including a sweep of the offensively challenged Seattle Mariners. The week ended on a sour note as those pre season World Series pick the Oakland Athletics came to town and handed us our first series loss at home since last August. Losing the series isn't what has me worried. Nor does the performance of Matt Moore yesterday. My concern is the offense, without Evan Longoria and as of this writing, we don't know the status of Desmond Jennings. I'll assume his is more minor.
On Friday and again yesterday are prime examples of how this offense struggles at tacking on runs. Friday we scored in the second and third and nary a hit after that. Yesterday we score four in the first and never threaten again.
The guys we need to hit and produce are simply not, Luke Scott is not getting on base like we thought he might, barely a 300 OBP. Ben Zobrist is a huge concern. We don't have the luxury with Longoria out of the line up to wait till this one year flash in the pan gets it in gear. I hope for the best, but am really concerned.
Now it's off to NY where those measly run totals we put up against the Mariners won't hold water. Hopefully the bats will come alive
Go Rays!!!

The Rays arrived home from Texas at 4 a.m on Monday morning and on Monday evening got to face Felix Hernandez who held them to 1 run over the first 8 inning of work. Jeremy Hellickson only allowed the Mariner 1 run through 7 and the game would enter extra innings. The Mariners jumped to a lead in the top of the 11th on a Jesus Montero opposite field home run. B.J. Upton delivered a 2-out RBI single in the bottom of the 11th to tie the game at 2-2 Elliot Johnson, who had come on to replace the injured Evan Longoria, delivered a walk off single to drive in Ben Zobrist to give the Rays the 3-2 victory.

Tuesday, May 1st: Month of May means time for Joyce to shine as Rays defeat Mariners 3-1

The calendar flipped to May and Matt Joyce likes May. Last year he hit an impressive .414/.470/.759 in 100 plate appearances. He began the month of May in 2012 in much the same fashion lining an RBI triple in his first plate appearance and smashing a home run in his second plate appearance. Matt Moore worked 5 innings allowing 1 run on 7 hits striking out 7 and walking 1. Burke Badenhop, Joel Peralta, and Fernando Rodney worked 4 scoreless innings in relief as the ways went on to win 3-1. The Rays won the game with only 3-hits - the last time that happened was on July 26, 2010 when Matt Garza threw his no-hitter versus the Detroit Tigers.

"Longo has very big shoes to fill," Joyce said. "And I think the guys kind of realize we've got to pick it up. It's just part of the game. Injuries are part of the game. Guys go through slumps and you have to pick each other up. That's what a good team does. I think we know that's the case. And we did it tonight. We've got our work cut out for us, but the great thing is we have a deep lineup and we have a lot of guys who can drive the ball." - mlb.com

Wednesday, May 2nd: Bottom of the order picks up Rays in 5-4 victory over Seattle

Sean Rodriguez and Jose Molina combined to drive in 4 of the 5 Rays runs and James Shields survived a shaky outing and the Rays won 5-4 over the Seattle Mariners. Shields threw 38 pitches in the first and needed 88 pitches to get through 4 innings but gutted it out and got through 6 innings with the score tied at 4-4. Despite the rough outing Shields had exceptional stuff as noted by his 11 strikeouts and only 1 walk in his 6 innings of work.

Luke Scott hit a home run in the bottom of the 6th that was assisted over the fence by Mariners center fielder Micheal Saunders. to give the Rays a 5-4 lead. JP Howell, Wade Davis, and Joel Peralta worked 3 scoreless innings to make a winner out of James Shields.

Thursday, May 3: Jeff Keppinger shines as Rays win 4-3 to sweep the Mariners

The Seattle Mariners were playing their last game of a 3-city 10 game road trip and the Rays were looking to jump on Mariners starter Kevin Millwood early. Of all people to strike against Millwood it was improbable 3b Jeff Keppinger who is notoriously bad at hitting right handed pitching who lined a 2-run homer to get the Rays scoring starting in a 4 run 3rd inning. The 4 runs held up as Jeff Niemann worked into the sixth inning and was followed by Jake McGee and Fernando Rodney who worked the final 3.1 innings for the victory.

Joe Maddon on the contributions of Rhymes, Giminez, and Keppinger:

"They played a big part in the victory," Rays manager Joe Maddon said. "I love to have everybody involved. Everybody has a piece of the ownership here. And because of that, you get that kind of clubhouse where people don't sit around and start talking or thinking the wrong things. Everybody participates here. I think that's a big part of our team chemistry and the concept." - mlb.com

Joel Peralta had the day off and dressed a little different for the game:

To say Price was superb would be an understatement. He threw 106 pitches in his eight innings of work, giving up three hits and striking out 12, including at least one from every member of the Oakland lineup. He generated 20 swinging strikes(!), including three on thirteen changeups and four on nine cut fastballs.

Dvaid Price on his outing:

"Right now, I feel good taking that ball every fifth day," Price said. "I like where I'm at personally, and I'm getting in a groove with [Catcher Chris] Gimenez and Molina, and it's starting to roll pretty good right now."- mlb.com

The Rays were not the Rays Saturday night. They had a starting pitcher use over 100 pitches in getting through 3.1 innings, they made errors, they let balls fall in play that are normally turned into outs, and the failed to execute in key situations. The Rays did receive three solo home runs by Elliot Johnson, Ben Zobrist, and Carlos Pena. The A's game winning homer came off the bat of former Ray Johnny Gomes and the game was saved by former Ray Grant Balfour. The loss was only the second loss at home for the Rays and ended their 6 game winning streak.

"It's just one of those nights," "I'm really proud of our guys in the way they battled and hung in there, though. The bullpen was superb and we had a lot of really good at-bats." - mlb.com

Jeremy Hellickson on his outing:

"My fastball command just wasn't there," said Hellickson, who threw 59 strikes. "I felt fine, but I just had a tough time being consistent with the fastball." - mlb.com

The Rays jumped out to a 4-0 lead but the A's scored 8 unanswered runs to move ahead 8-4. The Rays and A's traded runs late in the game and the Rays lost the game 9-5. The loss drops the Rays to 19-10 on the year and they remain 0.5 games behind the Baltimore Orioles in the AL East.

"We pitch our normal game there, we win," Maddon said. "[Moore] looked good right out of the shoot, but he just lost the strike zone. He's going through that youthful transition. It's going to happen. It happened with all of our young pitchers. David [Price] went through it." - mlb.com